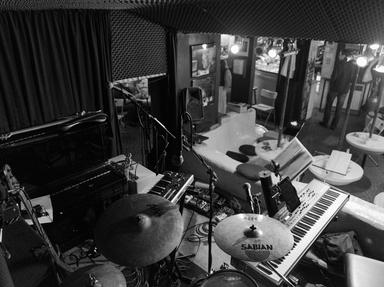 Trivia quizzes on the topic of Music from TV and Movies. How much do you know?

Quick Question
What is the love song for "A Walk to Remember"?
Sub-Categories:

Movies Rock 10 questions
Difficult, 10 Qns, Kinneylover20, May 04 12
What is a movie without the music behind it? Some movies have such signature sounds that they are easily recognized by the songs themselves. Let's see if you can identify the movie by its soundtrack.
Difficult
Kinneylover20
489 plays
122.

One Song Two Films 10 questions
Difficult, 10 Qns, thaibob, Jul 25 12
Four movie pairs and one song. Pick the pair where the named song is featured in both movies. For real film buffs, it should be a snap; if not, good luck.
Difficult
thaibob
276 plays
123.

Which song belongs to the Soundtrack (2003) 10 questions
Difficult, 10 Qns, bit_cheeky, Jan 28 04
Some of the movies that went to the top of the charts in 2003, also have a popular soundtrack. You've got to guess which movie has which song on its soundtrack or is featured in the movie. The 10 movies selected are the Top 10 Grossing movies for 2003:)
Difficult
bit_cheeky
534 plays
124.

Anime Music Quiz! 25 questions
Difficult, 25 Qns, ayanami9870, Jan 20 20
This quiz was once run by #Mechaanime at their local anime club, challenging members of their knowledge over a vital part in Anime -- the music. Enjoy the quiz and be amazed at what you can learn after finishing ^_^.
Difficult
ayanami9870
Jan 20 20
519 plays
126.

The Music From The Movie! 10 questions
Difficult, 10 Qns, gabba, Jun 21 01
Name that movie! I give you the musical question. I think it helps if youre more interested in the music than the movies. This quiz is more related to the music category. Have a great one!
Difficult
gabba
549 plays
127.

Songs From Ewan McGregor Movies 10 questions
Tough, 10 Qns, Magnetha, Mar 06 03
Some of these songs are sung by Ewan, and others are sung by other artists, but they are all very good songs from Ewan movies.
Tough
Magnetha
480 plays
128.

Song In A Scene Part 2 10 questions
Very Difficult, 10 Qns, scarygirl11, May 25 13
This is the second part to my first quiz of the same title. I will describe a movie scene, you tell me what song was playing during that scene. There are some spoilers. Good luck!
Very Difficult
scarygirl11

Baby Remember My Name 10 questions
Very Difficult, 10 Qns, OMGilovebobby, Jan 22 07
I noticed no-one had anything on the brilliant tv series "Fame", so I decided to make one. See if you can guess some info about the song by the lyrics.
Very Difficult
OMGilovebobby
333 plays
132.

"May the 'Music' Be With You" 10 questions
Difficult, 10 Qns, darthrevan89, Jun 04 09
Test your knowledge of the original "Star Wars" trilogy soundtrack - see if you can name the musical titles that accompanied Luke, Han Solo and Princess Leia on their adventures in the galaxy far, far away. May the Force, and the music, be with you!
Difficult
darthrevan89
279 plays
133.

"The Prayer" Through the Years 10 questions
Difficult, 10 Qns, ARose08, May 20 18
How much do you know about the different versions of this song originally performed by Celine Dion and Andrea Bocelli?
Difficult
ARose08
May 20 18
72 plays
134.

"One Piece" Opening and Ending Themes 10 questions
Tough, 10 Qns, OnePiece17, May 05 11
This quiz tests your knowledge on the music of the Japanese animated series "One Piece". Good luck.
Tough
OnePiece17
153 plays
141.

The "Electric Dreams" Soundtrack 10 questions
Average, 10 Qns, Popsicle01, Mar 09 09
Talk about a bizarre love triangle! The 1984 movie "Electric Dreams" featured a boy, a girl and a computer that named itself Edgar. This quiz mainly concerns the music and artists of the film's soundtrack. Just don't spill champagne on your keyboard!
Average
Popsicle01
213 plays
142.

Lights, Camera, Opera 10 questions
Tough, 10 Qns, fdgla, Nov 30 02
There are many films which feature opera sequences. See how well you do with a few questions featuring movies and opera.
Tough
fdgla
222 plays
143.

Jane Austen Movies Music 10 questions
Difficult, 10 Qns, triviaisgreat, Oct 09 04
For the ultimate Jane Austen movie music lover! It could be tough but if you like the music as much as I do, you'll know every answer!
Difficult
triviaisgreat
189 plays
144.

Disturbing Behaviour Soundtrack 10 questions
Difficult, 10 Qns, nataliejosh, Jun 04 01
Hey there! A new quiz is here and I decided to make it a little bit different! These questions are about the songs from the movie's sountrack-if you loved the movie, you gotta love the songs! Enjoy!
Difficult
nataliejosh
204 plays
145.

Songs from 'The Singing Detective' (BBC) 10 questions
Tough, 10 Qns, alkmene, Feb 22 04
I grew up on the jazz soundtrack from this scintillating Dennis Potter series, long before I was allowed to watch it. How well do you remember these war-time songs?
Tough
alkmene
180 plays
146.