Not many people have heard of the Keeshond breed, but for those who have or even have one themselves, I created this quiz just for you! Don't you feel special?

Share on Facebook
Share on Twitter
Share by E-Mail
Author
rayewolf
Time
4 mins
Type
Multiple Choice
Quiz #
33,110
Updated
Dec 03 21
# Qns
10
Difficulty
Tough
Avg Score
5 / 10
Plays
1789
This quiz has 2 formats: you can play it as a or as shown below.
Scroll down to the bottom for the answer key.

Quiz Answer Key and Fun Facts
1. The Keeshond breed originated in what area?

2. Keeshonden were originally used for what purpose?


Answer: They were used as barge dogs.

Though they also make great guard dogs and companions, Keeshonden were originally used as barge dogs.
3. What coloring is not a characteristic of the Keeshond breed?


Answer: Curl their tail onto their back

5. Keeshonds are prone to which of the following diseases?

6. During the 17th and 18th centuries, the Keeshond was known as what in France?

In Italy they were known as Lupini, in Germany as Wolfspitzen, and in Holland as Keeshonden.
7. In what year was The Keeshond Club of America formed?

8. The Keeshond is also closely related to what breed?

9. The Keeshond has earned a certain nickname. What is it?

Anyone who has ever come in contact with a Keeshond, should know of that famous Keeshond grin.
10. How tall is the average Keeshond?

This quiz was reviewed by FunTrivia editor gtho4 before going online.
Any errors found in FunTrivia content are routinely corrected through our feedback system.
Most Recent Scores
Jan 12 2023 : colbymanram: 6/10
Dec 29 2022 : Guest 200: 9/10 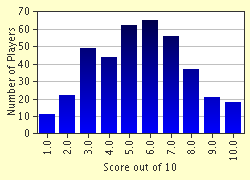 
Other Destinations
Explore Other Quizzes by rayewolf