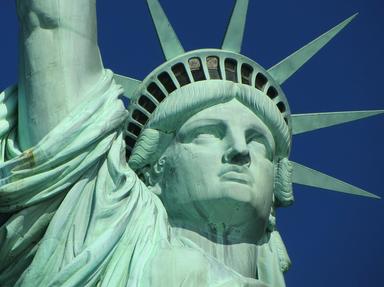 10 questions
Average, 10 Qns, ponycargirl, Dec 29 16
Since the American Revolution, the U.S. has been involved in approximately 100 direct armed conflicts. Can you correctly match these turning point battles from the 18th and 19th centuries with the corresponding war?
Average
ponycargirl

Tales of the Border War

10 questions
Average, 10 Qns, ponycargirl, Dec 20 16
The Border War between Missouri and Kansas has had far-reaching effects that still exist, although to a lesser degree, to this day. What do you know about this conflict?
Average
ponycargirl

Locations of Famous US Battles

Foreign Wars of the United States 10 questions
Easy, 10 Qns, Mariamir, Nov 30 12
Despite a reputation until World War II for isolationism the U.S. has a history of becoming involved in wars. What do you know of them?
Easy
Mariamir
Nov 30 12
2241 plays
8.

Old Glory: IV 25 questions
Average, 25 Qns, Avalice, Nov 23 13
It's 1812 and war is on the horizon. The United States, with impressment on the high seas and the rise of Tecumseh in the west, considers the possibility of waging war on the British Empire once again.
Average
Avalice
Nov 23 13
738 plays
9.

The Toledo War 10 questions
Tough, 10 Qns, qmwne, Dec 11 05
This is a short quiz on an almost unknown civil war within America, fought between April 1835 and December 1836, that settled a conflict that had previously lasted for two decades.
Tough
qmwne
Dec 11 05
1200 plays
10.

American Battles 15 questions
Average, 15 Qns, smurf-love, Aug 21 02
In the first ten questions you decide which war each battle took place in. The U.S. was involved in each war mentioned, but was not necessarily involved in all the battles. The last 5 are varied American War questions.
Average
smurf-love
Aug 21 02
6402 plays
12.

You And What Army? 10 questions
Tough, 10 Qns, logcrawler, May 01 10
The United States was involved in lots of military conflicts during the course of the 20th century. See if you can determine who we were fighting with, against, for - or even if we knew ourselves.
Tough
logcrawler

Events Leading to U.S. Entry in World War I 10 questions
Average, 10 Qns, thewho13rd, Jan 13 10
The United States clung to its tradition of isolationism when the "war to end all wars" broke out in Europe. However, as the war wore on, it became increasingly difficult for the U.S. to stay out. Why did the U.S. eventually enter World War 1?
Average
thewho13rd
Jan 13 10
1305 plays
17.

Military Medics (mainly US) 10 questions
Difficult, 10 Qns, Djanvk, Oct 26 10
The combat medic has helped sustain the fighting forces in the military all over world. This is a little history quiz about the profession.
Difficult
Djanvk
Oct 26 10
438 plays
18.

Weapons of Grenada 10 questions
Average, 10 Qns, LtGreene, Aug 28 04
Small wars should not be neglected from US War History. Here is a quiz on some of the weapons used in Grenada.
Average
LtGreene
Aug 28 04
978 plays
20.

US Military Actions 10 questions
Tough, 10 Qns, triviaguynamedjay, Dec 20 02
This is a quiz about US military policies and actions. All material found in here is historically accurate. When necessary, I have cited references for my information. Thanks and enjoy!
Tough
triviaguynamedjay
Dec 20 02
1479 plays
This is category 21660