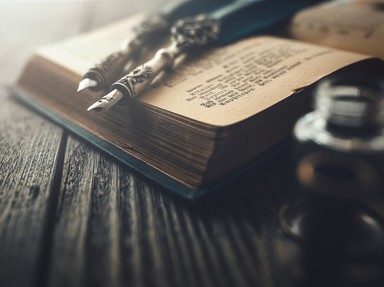 The Circle of Magic quartet, set in the land of Emelan, features four ten-year old children known as known as Sandry, Tris, Daja, and Briar as they learn to control their magical powers.

All About Sandry 10 questions
Easy, 10 Qns, hpgrl, Dec 11 06
This is all about my favorite character, Lady Sandrilene fa Toren, from the Circle of Magic and the Circle Opens series.
Easy
hpgrl
1302 plays
3.

"Sandry's Book" by Tamora Pierce 20 questions
Average, 20 Qns, trekkim, Jun 03 20
When I bought this book years ago, I had no idea that it would eventually become one of my all time favorite fantasy stories. I've done my best to come up with new, unique and interesting questions that I hope you will enjoy.
Average
trekkim
Jun 03 20
1029 plays
6.

The Will of the Empress 10 questions
Average, 10 Qns, broadwaygal, Dec 11 06
This book by Tamora Pierce came out September 15, 2005. It continues the story of Tris, Briar, Daja, and Sandry.
Average
broadwaygal
450 plays
7.

10 questions
Tough, 10 Qns, dragonlady64, Aug 05 07
Tris is one of my favorite characters out of all the books I have read. I know a lot about her. But how carefully did you read Tris's Book?
Tough
dragonlady64
327 plays
9.

He was to be sent to the docks for lifetime servitude, after being caught stealing 3 times. Niko rescued him from this fate, but Briar had to choose a new name to go to Winding Circle. He chose Briar Moss, for the moss in the jail cell, and the briars he had tangled with before. - From quiz: An Easy Circle of Magic Quiz
Earthquake, pirate attack, fire, blue pox.

Sandry, Tris, Daja, Briar, and Little Bear were trapped underground when the biggest earthquake had struck. Tris's cousin Aymery had let the pirates into Winding circle after putting a sleeping powder in the food. The fire mage Yarrun Firetamer, under the services of Lady Inoulia fa Juzon, had ignored the flames hidden under the cover of the forest. A mage named Eilisa Pearldrop tried "to create a potion to consume body fat, making it dissolve in wastes and in sweat." - Rosethorn, Briar's Book.
She then dumped it in the sewers, creating the blue pox. - From quiz: The Circle of Magic Series
They saved him from torture by some other children.

A few other children were torturing the poor puppy in an alley, so the four get into a fight with them and save the dog. - From quiz: Tamora Pierce: 'The Circle of Magic' Books
Niko.

Niko is considered the world's greatest mage. His full name is Niklaren Goldeye. "I'm sure Master Niko would act as truthsayer.... That is part of your skills, isn't it, Niko?"
- Duke Vedris, Sandry's book.
Rosethorn and Lark lives in the cottage named Discipline, and Moonstream is the Dedicate Superior who runs Winding Circle. - From quiz: The Circle of Magic Series
"The Circle Opens".

In "The Circle Opens" series, Sandry, Tris, Daja, and Briar all become teachers. Be sure to read all the books! Hope you had fun taking this quiz! - From quiz: The Circle of Magic Series
Scry the wind.

She doesn't tell them because she's afraid that they'll think she's showing off or lying. Most mages go mad trying to scry the winds, but Tris manages to learn in "Shatterglass". Her student Zhegorz also can scry the winds, but he was always able to, and was thought to be crazy because of it. Her foster-brother and foster-sisters don't find out because none of them have opened their minds to one another. - From quiz: The Will of the Empress
Frostpine.

Frostpine is the famous metal-mage, the only one who can work with all types of metal - save Daja. - From quiz: Tamora Pierce: 'The Circle of Magic' Books
This is category 15229
Last Updated Jun 24 2021 7:25 PM