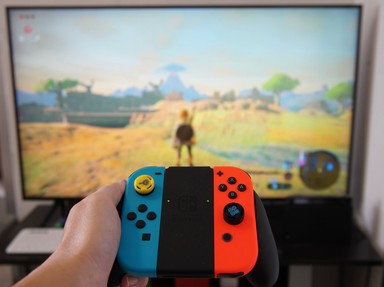 Released with the Wii console in North America, by far, "Wii Sports" is the highest-selling game on the console. Participating in five different sports, players can hone their skills and learn the basics of the Wii's motion-sensitive controls, or work to become a pro.
"Wii Sports" and "Wii Sports Resort" are for the Wii.

Quick Question
How many points are needed to achieve a Pro-rating in the golf game?
1.

10 questions
Average, 10 Qns, kyleisalive, Jul 25 08
Everyone who bought the Wii in North America got this game, which was comprised of five sporting events and was bundled with the console. Are you a pro in "Wii Sports"? Good luck!
Average
kyleisalive

'Wii Sports' 10 questions
Average, 10 Qns, Reyrulez, Sep 06 08
A 'Wii Sports' quiz covering all the sports and training exercises you can do as well as Wii fitness.
Average
Reyrulez
2394 plays
3.

"Wii Sports" Golf 10 questions
Average, 10 Qns, dagnity, Apr 07 07
A "how-to" on mastering the joyous game of "Wii Sports" Golf as well as some general questions about the set up of the game.
Average
dagnity
2436 plays
4.

Wacky "Wii Sports" Trivia 10 questions
Tough, 10 Qns, Mad-Z, Sep 30 11
This is a quiz about the video game "Wii Sports" for the Wii. Test your knowledge on this increasingly popular game.
Tough
Mad-Z
1572 plays
5.

Welcome to the "Wii Sports Resort"!

10 questions
Average, 10 Qns, Polaris101, Aug 14 18
"Wii Sports Resort" is the ideal vacation spot to enjoy your favorite sports. So what are you waiting for, pack your bags and let's go!
Average
Polaris101

"Wii Sports Resort" - Island Flyover 10 questions
Average, 10 Qns, lones78, Jan 28 10
After watching my (very frustrated) husband play 'Island Flyover' on the 'Wii Sports Resort' game, I just had to write a quiz about it. I have used location names that are the same in both NTSC and PAL versions.
Average
lones78