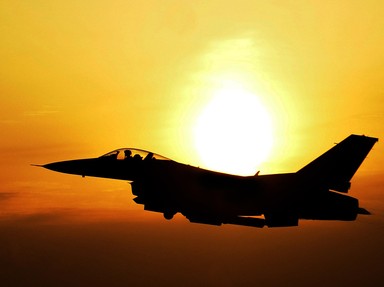 A new quiz every hour! Over 305 questions in rotation. Recent Scores

15 questions
Average, 15 Qns, CmdrK, Oct 25 13
During World War II soldiers and civilians alike learned to identify aircraft which might be threats by studying silhouettes of each country's planes. Let's update that method with photographs and see how many of these 15 old warbirds you can identify.
Average
CmdrK

10 questions
Average, 10 Qns, SisterSeagull, Sep 10 13
A brief quiz about the nicknames given to some well-known, and not-so-well-known WW2 aircraft; not 'official' nicknames, but the names given to them by the crews that flew them and by the airmen that were confronted by them. I hope you enjoy it.
Average
SisterSeagull

Aircraft of the Jet Age

10 questions
Tough, 10 Qns, Headrock, Apr 18 09
After World War II, jet fighter technology quickly became the obsession of the major military powers. A great diversity of aircraft was created, to suit many different roles. How well do you know the fighters and bombers of the Jet Age?
Tough
Headrock
Apr 18 09
1098 plays
4.

10 questions
Average, 10 Qns, madkeen4, Apr 28 09
I spent some time in the Air Force and became rather well acquainted with these aircraft during my tenure. See how much you know about the F-111. This quiz is dedicated to the memory of FltLt Anthony 'Shorty' Short and SqnLdr Steven Hobbs.
Average
madkeen4
Apr 28 09
714 plays
5.

10 questions
Average, 10 Qns, Canaris, Aug 29 09
If you think you know enough about this famous Russian aircraft manufacturer then this quiz is for you! Good luck and have fun!
Average
Canaris
Aug 29 09
552 plays
6.

Also Known As: Soviet Aircraft And Their Aliases

10 questions
Average, 10 Qns, darksplash, Aug 09 08
From the start of the Cold War, Western forces began to give names to the Soviet aircraft they encountered - mainly because they did not know their real names. See how much you know about Soviet aircraft and the names that the NATO gave to them.
Average
darksplash

The XB-70. Do you know the ways of the Valkyrie?

Jet Fighters 10 questions
Average, 10 Qns, ovalrocker, Sep 14 07
This quiz is all about Jet Fighters from around the world. Some are still in use and others have been retired from service.
Average
ovalrocker
Sep 14 07
2121 plays
9.

MiG31-Foxhound 10 questions
Average, 10 Qns, GuiseleyWitch, Aug 08 07
I've yet to see a specific quiz about one of my favourite aircraft, so I thought I'd have a go at testing everyone else on what some of my friends and I call 'The Gigantic Engine With Wings'.
Average
GuiseleyWitch
Aug 08 07
447 plays
10.

Fighter Planes 10 questions
Tough, 10 Qns, tmothymorris13, Sep 02 13
This quiz is about fighter planes, from the earliest prop-driven aircraft of the prop age up to the most technologically advanced jets of the jet age.
Tough
tmothymorris13
Sep 02 13
405 plays
11.

Soviet Fighter Aircraft 10 questions
Average, 10 Qns, battleofendor, Mar 08 04
The Soviets and United States were involved in a race for supremecy of the sky from the end of World War Two till about 1990. How much do you know about the Soviet fighter aircraft?
Average
battleofendor
Mar 08 04
3156 plays
12.

Fighter Planes II 10 questions
Average, 10 Qns, tmothymorris13, Sep 26 13
This is my second quiz about fighter planes, from the earliest prop-driven aircraft up to the most technologically advanced jets.
Average
tmothymorris13
Sep 26 13
330 plays
15.

Bomber Planes 10 questions
Average, 10 Qns, racemany2k, May 23 01
Another military plane quiz. I'll give you the bomber's nickname and you give the class.
Average
racemany2k

American Military Aircraft Nicknames 10 questions
Tough, 10 Qns, stevis82, Feb 28 11
Aircraft often acquire nicknames that are different from that bestowed upon it by the military or the manufacturer. See if you know the nicknames given to these famous planes.
Tough
stevis82
Feb 28 11
465 plays
18.

Eurofighter Typhoon II 10 questions
Average, 10 Qns, kyleastewart, Oct 09 05
This replacement aircraft for a number of European air forces is arguably one of the most capable and survivable aircraft today.
Average
kyleastewart
Oct 09 05
558 plays
22.

Military Aircraft Functions 10 questions
Average, 10 Qns, CANSpock, Jan 27 03
I give you the name of the aircraft, and you give me the primary function of that craft.
Average
CANSpock
Jan 27 03
2451 plays
23.

Soviet Bombers and Other Aircraft 10 questions
Average, 10 Qns, battleofendor, Sep 06 04
This is a follow up to my Soviet Fighter Aircraft quiz.
Average
battleofendor
Sep 06 04
1428 plays
24.

German WW2 RLM Numbers 10 questions
Difficult, 10 Qns, zuid99, Sep 27 07
In WW2, the German Luftwaffe assigned design numbers to all the aircraft manufacturers. Officially these numbers began with "8-"; in practice they were used with an abbrivation of the name of manufacturer i.e. Focke Wulf FW-190 for 8-190.
Difficult
zuid99
Sep 27 07
483 plays
25.

B-52 Stratofortress 10 questions
Average, 10 Qns, Montyd, Jan 15 14
The BUFF is one one of the greatest bombers of all time. Test your knowledge on this long serving aircraft.
Average
Montyd
Jan 15 14
249 plays
26.

A Selection of 20th-Century Experimental Aircraft 10 questions
Tough, 10 Qns, SisterSeagull, Sep 04 16
Some of these aircraft types flew in prototype form; some never advanced further than the drawing board. This quiz looks at some of those exciting, innovative and novel aircraft designs that never quite 'made it' for one reason or another.
Tough
SisterSeagull