Husbands and Wives in the Bible Quiz

I will give you information about a couple in the Bible. You tell me which couple I am talking about. All information is from the King James version. Have fun!

Quiz Answer Key and Fun Facts
1. The first couple in the Bible. He was made from the dust of the ground; she was made from his rib. They ate from a forbidden tree and were driven out of a beautiful garden.

Adam and Eve are in the first few chapters of Genesis. Adam was created from the dust of the ground (Genesis 2:7) and Eve was created from Adam's rib (Genesis 2:21-22). In Genesis 3 they ate from the tree of knowledge of good and evil and were driven out of the garden of Eden.
2. Known as the father and mother of many nations, this couple left their homeland to go to an unknown land. They had a promised child in their old age. Both are found in the faith hall of fame (Hebrews 11).

The story of Abraham and Sarah is in Genesis 12 through 23. In Genesis 12:1 God tells Abram to leave his country to a land He will show him. In Genesis 17:3-16 God changes their names to Abraham and Sarah and promises them a child who is born when Abraham is 100 and Sarah is 90 (Genesis 21:1-7).
3. This couple came together because his father sent a servant to his home country to find him a wife. They had twin boys. She deceived him so the son she loved would receive a blessing.

In Genesis 24 Abraham sends a servant to the city of Nahor where he finds Rebekah who agrees to go back with him and marry Isaac. She gives birth to Esau and Jacob in Genesis 25:24-26. Rebekah deceives Isaac in Genesis 27:6-29 by making him think Jacob is Esau and he proceeds to give Jacob the blessing.
4. He was married to two sisters, but loved only one. She was barren until God blessed her with a son. He gave this son a coat of many colors. She died while giving birth to her second son.

Jacob's father-in-law was another deceiver. He forced Jacob to marry Leah before he could marry Rachel (Genesis 29:21-30). Rachel gave birth to her first son Joseph in Genesis 30:22-24, and Jacob gave him the coat of many colors in Genesis 37:5. Sadly, Rachel died while giving birth to her second son Benjamin (Genesis 35:16-20).
5. This couple met at a well in Midian. She was the daughter of a priest. He was raised as the son of Pharoah's daughter. His brother and sister later spoke against him because he was married to an Ethiopian.

We read in Exodus 2 where Moses was born and his mother put him in a basket and into the river. Pharaoh's daughter found him and he later became her son (verse 10). Later in the chapter Moses runs away to Midian where he meets the priest's daughters and remains in Midian and marries Zipporah (verse 21). In Numbers 12:1 Miriam and Aaron are upset because Zipporah is Ethiopian.
6. She was a young widow who returned with her mother-in-law to Bethlehem rather than her home country of Moab. He was her kinsman-redeemer. They had a son whose grandson became a great king.

Ruth became a young widow (Ruth 1:4-5) and refused to go home to Moab because she wanted to go with Naomi (Ruth 1:15-19). There in Bethlehem she met and later married Boaz (Ruth 4:13). Their son Obed was the father of Jesse who was the father of David (Ruth 4:17).
7. He had two wives. She was the wife that he loved. She was barren and wept because she was provoked by the other wife. God answered her prayers with a son whom they gave back to the Lord.

In the first chapter of I Samuel Elkanah has two wives, Peninnah and Hannah, but he loved Hannah more (verse 5). Pininnah had children and liked to provoke Hannah because she was barren (verse 6). She prayed at the temple for a son and promised to give him to the Lord (verse 11). Samuel was soon born and they brought him to the priest, Eli, and returned him to the Lord (verses 19-28).
8. He was a carpenter. She was highly favoured of the Lord. They had a virgin born son who was born in a stable. Christians believe that this son eventually became the saviour of the world.

Joseph was a carpenter (Matthew 13:55). When the angel Gabriel came to Mary to give her the news that she will have a son Jesus, he called her "highly favoured of the Lord" (Luke 1:28). Jesus was later born in a stable and placed in a manger (Luke 2:7). The angel announced to the shepherds that a Saviour was born (verses 10-11).
9. She was one of the daughters of Aaron. He was a priest. He was struck dumb until the birth of their son because of his unbelief. Their son went on to prepare the way of the Lord.

Just before the story of the saviour's birth is the story of Zacharias and Elisabeth in Luke 1. In verse 5 we find that Zacharias is a priest and Elisabeth was "of the daughters of Aaron". An angel appears to Zacharias to tell him he will have a son (verse 13) and then strikes Zacharias dumb because he didn't believe (verses 19-20).

When John (the Baptist) was born his father prophesied that he will prepare the way of the Lord (verse 76).
10. This couple sold some land, but kept part of the price for themselves. He laid the money at the apostles' feet and was struck dead for lying to God. She came in three hours later and was also struck dead for lying. Both were buried that day.

In Acts 4:34-35 people who owned land or houses sold them and gave the full amount to the disciples to distribute to those in need. Ananias and Sapphira sold a possession, but decided to keep part of the price for themselves. When Ananias laid the money at the apostles' feet and when Sapphira later came to the apostles both were struck dead for lying to God (Acts 5:1-10).
Source: Author AuntShaney 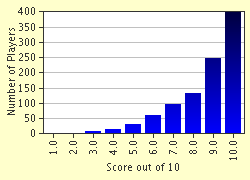 Related Quizzes
1. Biblical Definitions Average
2. It All Ends in Fire Easier
3. Bible Occupations Average
4. Bible Verses Easier
5. Complete the Biblical Quote Very Easy
6. And In the End Easier
7. Revealing Revelation Average
8. A Quick Look at Ten Old Testament Books -- #2 Easier
9. 25 Miracles in the Bible -- 'A' Through to 'Z' Average
10. Match Quiz: Old Testament Geography -- #3 Easier
11. 25 Women of the Bible -- 'A' through to 'Z' Average
12. For the Bible Tells Me So Tough


Other Destinations
Explore Other Quizzes by AuntShaney