So, you're a fan of gymnastics? Well, let's see if you know the nicknames of these popular gymnasts.

Quiz Answer Key and Fun Facts
1. This gymnast was called the "Belarusian Swan" and the "Goddess of Gymnastics" due to her height, grace, and long lines. She is also a three-time Olympic champion. Who is this gymnast?

Svetlana Boginskaya competed in 3 Olympics, from 1988 Seoul to the 1996 Atlanta Games. She won a total of 5 Olympic medals, 4 of them gold.
2. This gymnast has often been called the "Diva" or "Queen" of Russian gymnastics. She is a 7-time Olympic medalist and known for her expressive dance, extreme difficulty, and innovative routine. Who is this gymnast?

Svetlana Khorkina has embraced being called a "Diva", often stating, "I don't mind. I wouldn't have been called a diva or a queen if I wasn't creative."
3. This one Belarusian gymnast helped turn women's gymnastics into the popular sport it is today. She is often referred to as the "Sparrow of Minsk". Who is this gymnast?

Olga Korbut charmed the audiences at the 1972 Munich Olympics with her creative moves on the uneven bars and the balance beam. She also competed at the 1976 Montreal Olympics, earning 6 medals between the two.
4. This gymnast captivated audiences with her high flying release skills on the uneven bars and her tumbling ability on the floor exercise. She eventually gained the nickname "Awesome Dawesome". Who is this gymnast?

Dominique Dawes competed in 3 Olympics. She competed in the 1992 Barcelona, 1996 Atlanta, and the 2000 Sydney Olympics.
5. This gymnast claims the nickname as "America's Sweetheart'. She is the first gymnast from the United States to win the coveted All-Around gold medal at the 1984 Los Angeles Olympics. Who is this gymnast?

Mary Lou Retton was America's first All-Around Champion at the Olympics. Many say that she wouldn't have won if the Soviet Union or other powerhouse nations hadn't boycotted the Games.
6. This gymnast earned her nickname "Little Miss Perfect" at the 1976 Montreal Olympics. She was first gymnast to receive a perfect 10 at an Olympic game. Who is this gymnast?

Nadia Comeneci earned a total of 7 perfect 10s at the 1976 Montreal Olympics.
7. This team of gymnasts made history by capturing the team gold at the 1996 Atlanta Olympics over the favored Russian team. This was the first time in United States history that this has happened. The team included captain Amanda Borden, Shannon Miller, Dominique Moceanu, Dominique Dawes, Kerri Strug, Amy Chow, and Jaycie Phelps. What was this team often referred to after those history making games?

Kerri Strug sealed the gold medal for the United States women's gymnastics team when she vaulted on a severely injured ankle, and landing on 1 leg after hurting it on her first vault.
8. As this gymnast progressed through her gymnastics career she earned the nickname of "Mighty Mouse". She was favored to win the All-Around gold at the 1996 Atlanta Olympics, but a mistake on her final apparatus left her in 5th place. Who is this gymnast?

Mo Huilan earned the nickname "Mighty Mouse" from her fans.
9. This gymnast nicknamed "Pepsodent" missed competing at the 1992 Barcelona Olympic Games though she made the team, but was left off in favor of another gymnast. However, she did compete as the captain of the 1996 Olympics women's gymnastics team. Who is this gymnast?

When Amanda Borden was younger, she earned the nickname "Pepsodent" because of her large smile, and super white teeth.
10. This gymnast is a 7-time Olympic medalist, however, the nickname "Zidicala" which is roughly translated to "airhead" was given to her by her Romanian teammates. Who is this gymnast?

Though considered an "airhead" by her teammates, Simona Amanar was one of the most successful Romanian gymnasts of her time. She earned 7 Olympic medals between the 1996 Atlanta and 2000 Sydney Olympics, 10 World Championship Medals from 1994-1999, and 12 European Championship medals.
Source: Author xgymnasticsx1 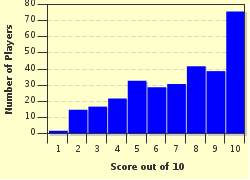 
Other Destinations
Explore Other Quizzes by xgymnasticsx1