It's All 'Latin' to Me Trivia Quiz

How familiar are you with some of the Latin phrases that are used in English? Test your Latin expertise with this quiz. Choices in quotes are actual Latin translations (or my own fractured inventions designed to fool you).

Of course, your alma mater is the school or university from which you've graduated.
2. Mea culpa

The term is used to refer to laboratory experiments because they are often carried out in glass containers.
4. E pluribus unum

It is the motto of the United States and is found on the Great Seal and on U.S. currency. It refers to the Union formed by the separate states.
5. Ibid(em)


Answer: 'in the same place'

It is used in footnotes and bibliographies to refer to the source cited in the previous entry.
6. Pro forma


Answer: satisfying only the minimum requirements

Children might make their beds pro forma by just throwing the spread or comforter over the sheets.
7. Ante-bellum


Answer: 'before the war'


Answer: to assume the duties and responsibilities of a parent

Literally means 'in the place of a parent.' At one time colleges and universities acted in loco parentis for their students.
9. Nolo contendere

The Latin translation is 'without which nothing.'
11. Sic


Answer: an apparent error is quoted and is not an editorial mistake

If a newspaper were quoting someone who spoke in error, it might look like this. John Smith said, 'I will be backing John(sic) W. Bush all the way.'
12. Ex post facto


Answer: an explanation concocted after an event, sometimes misleading

Latin translation is 'after the deed.'
13. Ad hoc


Answer: created for a particular occasion

Latin translation is 'toward this (matter).' The term is often used to refer to committees formed to address a specific or short-term issue.
14. Non sequitur

Latin translation is: 'It does not follow.'
15. Non compos mentis


Answer: out of one's mind so not legally responsible

From Latin meaning 'not having control of the mind.'
16. Quid pro quo

This phrase is often used in {diplomacy;} from Latin meaning 'something for something.'
17. Per capita

We use this phrase any time we measure something for each person.
18. Caveat emptor


Answer: be alert to the possibility of being cheated


Answer: an accused person must be presented physically in court and given sufficient cause for arrest

Latin translation is 'You may have the body.' It means that no one can be imprisoned indefinitely without appearing in court and having charges formally made against him or her.
Source: Author jellow_10 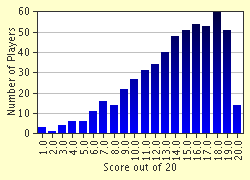 
Other Destinations
Explore Other Quizzes by jellow_10