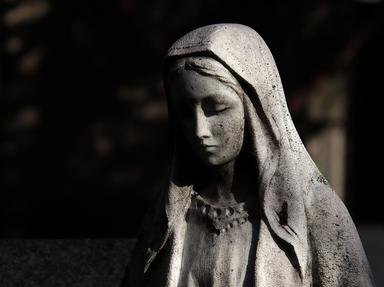 How much do you know about Virgin Mary? This category is for trivia questions and answers related to Virgin Mary (Religion). Each one is filled with fun facts and interesting information. There are 50 questions in this immediate directory. Last updated Dec 08 2022.
Related Questions & Answers:   Popes    Patron Saints
Pages: 1 - 2 - 3 - 4 - 5
1 Of all the New Testament books, the Gospels of Matthew and Luke speak about Christ's conception and birth the most. Mary gave birth to Christ in Bethlehem, but she was only visiting there. In which city did she herself live?


Luke 1:26-28 in the Names of God translation:
"Six months after Elizabeth had become pregnant, God sent the angel Gabriel to Nazareth, a city in Galilee. The angel went to a virgin promised in marriage to a descendant of David named Joseph. The virgin's name was Mary. When the angel entered her home, he greeted her and said, 'You are favored by the Lord! The Lord is with you.'"

While the Bible doesn't include many details about Mary's personal life, we can probably assume that, at this point, she was a young woman (what the ancients considered a young woman would be more like a teenager in modern terms) who lived with her parents and maybe siblings. When the Gospels introduce Mary, no family members beside Elizabeth are discussed, but John 19:25 suggests that she had a sister.

Mary traveled a lot, whether she wanted to or not. In Luke 1:39, she went to the country of Judah to visit her relative, Elizabeth. Then she had to go to Bethlehem because Joseph's ancestors were from Bethlehem. She, Joseph, and the child Jesus lived in Egypt for a while to escape King Herod. Finally, they moved back and Mary raised Jesus in her hometown of Nazareth (see Matthew 2:23).

2 On which date is the feast of Our Lady of the Annunciation celebrated, in Roman Catholicism?


The feast of Our Lady of the Annunciation is celebrated on March 25. The Roman Catholic doctrines of the Incarnation and Annunciation were proclaimed by Pope Benedict XIV. The prayer, "The Hail Mary" contains both these events. "Hail Mary, full of grace, the Lord is with thee, Blessed art thou amongst women, and blessed is the fruit of thy womb, Jesus".

3 Mary was greeted by St. Gabriel the Archangel to announce the birth of the Son of God. What was her reply to this greeting?

Answer: "Be it done unto me according to your word."


Mary's response was "Be it done unto me according to your word" (Luke 1:38). This reply was brought about by humility, her complete resignation to the will of God.

4 In 1531, an Aztec Indian in Mexico named Juan Diego reported encountering a beautiful woman surrounded by a bright light who called herself "Mary, the Virgin." In presenting the information to the local bishop, a great miracle occurred. What was that miracle?

Answer: His cape contained an image of the Virgin Mary


The Virgin told Diego to ask the Bishop to build a church where she appeared. The bishop said he would consider the request if the Virgin could supply a sign to prove she was who she said she was. Though it was freezing weather, the Virgin Mary asked Diego to cut roses that were blooming from a bush on top of a hill. He found the roses, cut them, and placed them in his "tilma" (a cape made of cactus fiber). When Diego opened the tilma and presented the roses to the bishop, all saw an image of the Virgin on the tilma, exactly as Diego had described her. This image on a cape of cactus fiber still exists today. In 1977, it was examined with infrared photography and digital enhancement techniques but examiners were not able to determine how it was created, nor how it has been preserved after all these centuries.

From Quiz: Virgin Mary...Hey, Have You Seen Her?

5 Which Eastern European country venerates Mary with the title, "Our Lady of Czestochowa"?


Since 1362, The Shrine to Mary, Our Lady of Czestochowa is located on the mountain top, Jasna Gora, (meaning Bright Mountain) in Czestochowa,Poland. The painting (or icon), is in the monastery and care of the Pauline Fathers. In the shrine there is a painting of Mary, known as "The Black Madonna", so named because of the discoloration that had occurred to the icon over the centuries. This painting also plays an important part in Polish history and many miracles through the intercession of Mary are credited to her. Many pilgrimages are made to Jasna Gora. One of the largest treks was on September 8, 1682, when one hundred and forty thousand persons attended a ceremony to commemorate the three hundredth anniversary of the painting of "The Black Madonna" arriving in Czestochowa. The tradition of pilgrimages has continued. In August of 1957, with a copy of the icon of Mary, a pilgrimage began to carry it to all the churches throughout Poland. During the years 1966 to 1972 the painting of "The Black Madonna" itself was taken under Communist control. With ingenuity, the procession continued with the empty wooden frame of "The Black Madonna" carried as their banner.

6 The prayer "Hail Mary" is one of the most loved Marian prayers. The portion of the response which says "Holy Mary, Mother of God" was based on the words of which character in the Bible?


This portion of the prayer is based on the words of St. Elizabeth when Mary visited her. This verse is located at Luke 1:42-43.

"[Elizabeth] cried out in a loud voice and said, "Most blessed are you among women and blessed is the fruit of your womb. How does this happen to me, that the mother of my Lord should come to me?"

7 In 1846, the Virgin Mary appeared weeping to two young shepherds. She warned that "In the year 1864, Lucifer together with a large number of demons will be unloosed from hell; they will put an end to faith little by little, even in those dedicated to God." Where in the world did this occur?


This apparition occurred on September 19 to two children named Melanie Calvat and Maximin Giraud. The Virgin Mary said her son was not pleased with mankind and gave each child a series of "secrets." In 1858, the children were allowed to have all secrets published. In brief, the secrets concerned large wars between many countries, disasters in nature, and the appearance of an "anti-christ." In 1851, the Catholic church "approved" (made it acceptable to believe them as true revelation) the LaSalette apparitions.

From Quiz: Virgin Mary...Hey, Have You Seen Her?

8 Luke 2:7 proclaims, "She gave birth to her ___ son. She wrapped him in strips of cloth and laid him in a manger because there wasn't any room for them in the inn" (from the Names of God translation). The belief that Mary was a virgin when she bore and gave birth to Christ, the Son of God, is essential to the Christian faith. But Catholics and Protestants disagree about her virginity after her holy baby's birth. The quoted verse above is missing which word?


The missing word is firstborn. This is a subject of controversy. It is an official doctrine of the Roman Catholic Church that Mary remained a virgin her entire life, even after marrying Joseph. Many Protestants believe that the couple had a regular marriage after the birth of Jesus.

For this verse in particular, Protestants think that "firstborn", which most translations use, has an obvious meaning. Catholics argue that it is merely an allusion to Exodus 13:1-2, which state, "Yahweh spoke to Moses, 'Set apart every firstborn male for me. Every firstborn male offspring among the Israelites is mine, whether human or animal.'" The Catholic argument includes that the Israelites didn't wait for a second or third son before consecrating their first, so they argue in some cases the firstborn son is an only son.

The New Testament has many verses that reference the "brothers" and "sisters" of Christ and Christ's mother is often in the company of them, and Protestants usually cite such verses, but the Catholics argue that those aren't her biological children. A common Catholic view is that they are Christ's cousins and the sons of Mary, the wife of Clopas.

9 The Byzantine icon known as "Our Lady of Vladimir" was painted by an artist in a city named for which early Roman Emperor and convert to Christianity?


The painting of Mary, known as "Our Lady of Vladimir", shows Mary holding the Child Jesus, cradled in her arms with His cheek nestling hers, and His arms caressing her. Revered as an icon, the painting was given to Vladimir, Russia, by the Patriarch of Constantinople in the twelfth century. This icon is also known as "Our Lady of Tenderness". In 1395, from the Russian city of Vladimir, the painting was brought and placed in the Cathedral of the Assumption in Moscow, Russia. This painting was also carried to the battlefront by the Russians in World War I.

10 There are four Marian dogmas confirmed and approved by the Catholic Church. Which of the following is not a Marian dogma?

Answer: The Coronation of the Blessed Virgin Mary


A dogma proposes truths in relation to Divine Revelation. It means that these truths are revealed by the very being through either a vision or miracles.

The following are the four Marian dogmas as declared by the Catholic Church. These are:

There is a nice page on Marian dogmas at the University of Dayton's Marian Library website.

Your options: [ The Immaculate Conception ] [ The Coronation of the Blessed Virgin Mary ] [ The Divine Motherhood of Mary ] [ The Perpetual Virginity of Mary ]

The rest of the questions and answers can be found in our quizzes here:
Virgin Mary Quizzes