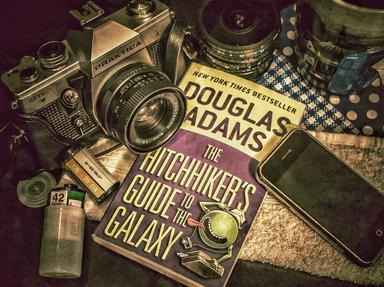 Of course you've heard of "The Hitchhiker's Guide to the Galaxy", which started in 1978 as a BBC radio comedy, before developing into a "trilogy" of five books, a television series, several stage plays, comics, a computer game, and a 2005 feature film, but that is only a small part of the comedic output of Douglas Adams.
There are 47 quizzes and 470 trivia questions in this category.

A new quiz every hour! Over 470 questions in rotation. Recent Scores

The Hitchhiker's Guide to the Galaxy (37)

Did Douglas Adams Say That? 10 questions
Average, 10 Qns, TriviaMelee, Nov 26 02
Pretty simple...I'll give a quote and you say yes or no, depending on whether Douglas Adams was the author or not.
Average
TriviaMelee
Nov 26 02
3324 plays
2.

The Original Hitchhikers Radio Series 10 questions
Tough, 10 Qns, Victoroftheapes, Nov 23 01
Those who know only the books may want to hear (or read) the original radio series first.
Tough
Victoroftheapes
Nov 23 01
1299 plays
This is category 8815
Last Updated Jul 04 20 5:46 AM