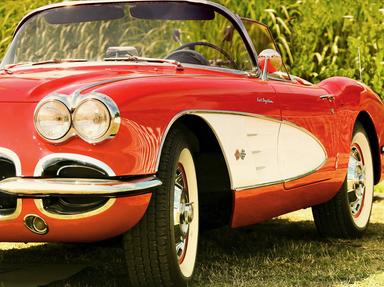 Vrooom! Vrooom! Gentlemen (and ladies) start your quizzes!
Here you will find quizzes where the cars are the stars!

Quick Question
What type of car was driven mainly by David Starsky in the film and T.V series "Starsky and Hutch"?
1.

The Car is the Star

10 questions
Average, 10 Qns, wyattsheff, May 12 10
This quiz is about the cool cars that are undoubtedly the real stars of the movies that they are in.
Average
wyattsheff
2316 plays
2.

License Plates of the Silver Screen

10 questions
Easy, 10 Qns, LeoDaVinci, Mar 28 13
Hardly anybody notices the license plates on cars in movies. Here are a few I took note of for you. Can you guess which movie these license plates come from?
Easy
LeoDaVinci

Welcome to the osCARS 10 questions
Easy, 10 Qns, stredman, Feb 29 16
The actors get all the accolades, but sometimes the car is the real movie star! I will give you the car and some background information. Can you name the movie?
Easy
stredman

Burning Tarmac 10 questions
Easy, 10 Qns, smpdit, Jul 13 17
Phoenix Rising asks you to join them as they speed through movies with epic car chases in them. Fasten your seat belts and see if you can identify the movie using the three clues provided.
Easy
smpdit

Name the Vehicle in Each Film 10 questions
Difficult, 10 Qns, SimonWM, May 12 10
See if you can determine the vehicle associated with each character or situation in the following films.
Difficult
SimonWM
1599 plays
6.

10 questions
Tough, 10 Qns, shanteyman, May 12 10
A quiz about films over the years that have focused on Hot Rod cars or racing.
Tough
shanteyman
951 plays
7.

Movie Vehicles and Their Drivers 10 questions
Average, 10 Qns, MaceoMack, Mar 28 16
Match the movie car with the character most often seen behind the wheel. Hints can be found in the questions. Good luck.
Average
MaceoMack
Mar 28 16
291 plays
9.

Follow That Car! 10 questions
Difficult, 10 Qns, zippolover, Apr 02 14
"Follow That Car!" and its variations, is a phrase often used in movies, with varying degrees of success. I will give you the movies and you supply the extra information. Good luck!
Difficult
zippolover
309 plays

Smokey and the Bandit.

Burt Reynolds (Bandit), Sally Field (Frog) and Jerry Reed (Snowman) take on the Highway Patrol (Smokey) with Snowman driving the truck with the beer, and Bandit in the Trans-Am running interference as 'the blocker'.

Coors Beer was considered to be best beer available in the US at the time (1977) but was not available east of the Mississippi River, hence the need to smuggle it to Atlanta from Texas.

Herbie was a 1963 Volkswagen Beetle, painted pearl white with a red, white and blue stripe running over top of the car from bumper to bumper. His racing number was 53.
Although designed as the people's car, the distinctive and much loved Beetle was used by the German Army as military vehicles during the Second World War. - From quiz: The Car is the Star
The Blues Brothers.

This 1980 movie featured John Belushi and Dan Aykroyd driving a black and white police car dubbed the "Bluesmobile" through Chicago on a "mission from God". In the process, they completely trash a suburban shopping mall, drolly commenting on the wide variety of store offerings, and about 100 Chicago police cars. That "mission from God" was to raise $5,000 and get it to the Cook County Assessor's office on time to save the orphanage in which they were raised from closing down.

David Starsky's car of choice, for undercover policework, was a bright red Ford Gran Torino with a very conspicuous white stripe down the side. It was probably not the best choice of car for undercover work but the "Striped Tomato" was a great looking car. Torinos were first produced in 1968, but the 1974 to 1976 models were the ones used in "Starsky and Hutch". - From quiz: The Car is the Star
Pontiac Trans Am.

The Trans Am "Firebird" (so called because of the large image of a Phoenix rising from the flames emblazoned on the bonnet) is always black with gold detailing, in all three movies.
The film follows the "Bandit" (Burt Reynolds), who is hired to escort a consignment of beer into a "dry" county. Throughout the journey he is pursued by a hapless sheriff and his troops, but needless to say the Bandit always has the last laugh. - From quiz: The Car's the Star
Kenny Rogers.

The finale of "Six Pack" featured footage of the 1982 NASCAR Coca-Cola 500 at the Atlanta Motor Speedway. Darrell Waltrip won the event. Kenny Rogers had the lead role in the film that involved Rogers and six orphans he rescued from a life of petty larceny abetted by a local sheriff. The kids helped turn his floundering racing career around. Rogers, David Malloy, Even Stevens and Thom Schuyler composed a song included in the film, "Love Will Turn You Around". The song was a Number One Country hit that also became a Top Twenty crossover hit.
Richard Pryor starred in the 1977 film, "Greased Lightning", about Black Nascar driver Wendell Scott.
Richard Davalos was in the 1969 stock car film "Pit Stop", also released as "The Winner".
John Candy starred in the 1989 film, "Speed Zone". - From quiz: Hot Rod Movies
Lamborghini Countach.

Two women in a black Lamborghini won the Cannonball Run, after it turned into a foot race for the last few hundred metres. The film was based on an actual illegal race that took place during the 1970s called the Canonball Run.
The instantly recognizable Countach was produced by Italian car manufacturers Lamborghini between 1974 and 1990, when it was replaced with the Lamborghini Diablo. - From quiz: The Car is the Star
This is category 19810
Last Updated Jun 24 2021 7:25 PM