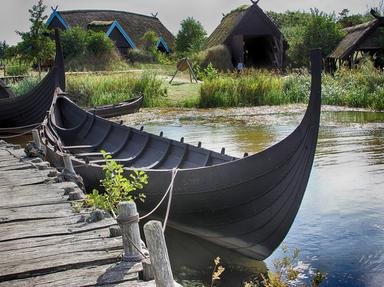 The Viking longships came in numerous types, and ruled the Northern Atlantic for centuries. Test your knowledge or learn about them.

Quiz Answer Key and Fun Facts
1. When did sailing-boats first appear in Scandinavia?

They were constructed from an old rowing-boat-type that was used by the Vikings. This boat-type was used until the ninth century.
2. What was the private boat-type?

The karv was used for local travelling along the coast. The longships are identical with the karv, except that they are larger.
3. What was the knorr used for?

This was the most commonly built ship-type in the Viking fleet. It was tougher and broader than the longshps, and could carry both men, cargo and animals. The oarholes were concentrated in the front or in the back, and the cargo was stored in the centre of the boat.
4. Broad sails are more effective than tall sails.

Old drawings on rock describe the viking-sails as a horizontal rectangle, but tests show that a standing rectangle is more effective. The sails were probably drawn horizontally for esthetic reasons.
5. The Vikings had a kind of navy. What was it called?

In case of emergency, each region had a standing fleet of ships ready to counter the enemy. They were large longships with 25-30 rooms.
6. What are the two most famous Viking ships, found in mounds in Norway?

The ships had red stripes on a white background. They were more expensive to produce, and therefore showed the power of the owner.
8. In 1893, Magnus Andersen sailed across the Atlantic with the copy of a Viking-ship. How long did the journey last?

The ship was a copy of the Gokstad-ship.
To compare, a copy of Columbus' ship, Santa Maria, used several months on the same journey.
9. Where did the Vikings sleep when travelling at sea?


Answer: in tents on deck

The ship was divided into several rooms, but the crew slept in tents on deck.
10. How did the Vikings transport the ships over land?


Answer: rolled them on logs

To save many days of travelling, often between the Norwegian fjords, they transported the ships over land. They emptied the ship for ballast-rocks, and rolled them to rivers, lakes or fjords.
Source: Author harald 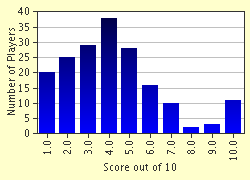 
Other Destinations
Explore Other Quizzes by harald