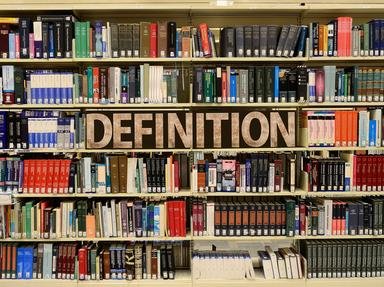 Today's society has lost faith in its education system. Let's see if they're right.

Quiz Answer Key and Fun Facts
1. What is a periscope?


Answer: Instrument used to see things above the surface of the water

An instrument on a submarine that is used to see ships, land or other things above the surface of the water. Periscopes can also be used in other situations where it is desired to see an area which is obstructed from direct vision, such as out of a tank, or over a parapet.
2. What part of speech is the word 'peril'?

Peril, noun, a chance or risk of human loss or harm.
3. What is a gnu?


Answer: A kind of antelope that lives in Africa

gnu: A large animal that lives in Africa, a kind of Antelope.
4. The word cunning can be either of which two parts of speech?

adjective-very clever at fooling others, noun-cleverness at deceiving others
5. A stamen is part of what?

Stamen:The part of a flower that produces pollen.
6. What does vanquish mean?


Answer: To defeat or overcome

7. What is a synonym for the word prime?

Prime-The first or greatest of importance or value
8. What does debris mean?


Answer: the scattered remains of something destroyed

9. What does acquaint mean?


Answer: an area of land

Acreage is an area of land measured in acres.
Source: Author DeiDei 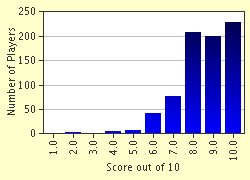 
Other Destinations
Explore Other Quizzes by DeiDei