People say musicals are for girls. But not so! Sometimes though, to get the sensitive fellows though the door, some creative advertising is required. Here are a few musicals spun in such a way that the boys will be queuing around the block...

Quiz Answer Key and Fun Facts
1. Would a musical with Nazis, wimples, daring escapes, thunderstorms be butch enough for you? Which one is it?

The first of several musicals with Nazis prominent. It's not all nuns and kids you know.
2. OK big man! Would you go to see Communists, Jews being persecuted, Cossacks, lots of beards in a musical? Would you know what you were going to see?

Tevye never gets to be a rich man. The Cossacks drive him and his family from their home at the end of the film.
3. The hoarding over this show announces "Several blokes dancing - with Axes!" "The abduction of the Sabines!" "Fist fights!" "Avalanches!" What does it say on the ticket? (Apart from seat F14, Ł50)

If you think tough guys don't dance, watch the barn raising scene in this excellent show.
4. A dark musical with Nazis, persecuted Jews and sleazy nightclubs. What are you paying your 'mark, a yen, a buck, or a pound' for?

For the first verse of 'Tomorrow Belongs to Me' the camera is up really close to the young tenor singing. The realization as the camera tracks back, that the boy is in fact a Nazi brownshirt was really creepy.
5. Your mate tells you this show has pirates, virgins, soldiers, policemen and battles 'from Marathon to Waterloo in Order Categorical' What has he been to see?

I'm not entirely sure this is a musical, but this operetta has a mixture of songs and dialogues, so I reckon it counts.
6. Lots of Queen songs, one after another! What more could a man ask? The name of the show, perhaps?


Answer: We Will Rock You

'Our House' is based on Madness Songs. 'Mamma Mia' is based on Abba songs. "The Beautiful Game" is trying to get you to think of the Queen song 'The Game'. You weren't fooled, were you?
7. Revolution! Man the Barricades! 'Some will fall and some will live. Will you stand up and take your chance' with which show?

Fantastically powerful musical. Nearly everyone dies, but you still feel it's a happy ending. Go figure.
8. 'Beautiful girls wearing nothing but pearls.' I have to see this recent musical; but which one should I ask for?

It's mean of me to tempt you in with one line from one song, but you won't be disappointed.
9. A musical for all you baseball fans. If you've ever been to a game, you've probably sung the 'hit single' to which show?


Answer: Take Me Out to the Ball Game

Frank Sinatra and Gene Kelly are vaudeville performers who just happen to be pro baseball players in the summer, in the film version. Preposterous, but fun.
10. More Nazis! More nuns. No they're not Jews, but Aretha thinks they look like a pair of 'Hasidic diamond merchants'. Carrie Fisher with a rocket launcher. Hundreds of cars completely totalled. Surely you have already seen this, and didn't notice it was actually a musical?

At the time, it was the most cars destroyed in one movie.
Source: Author sackmandan 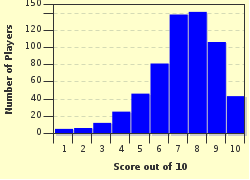 
Other Destinations
Explore Other Quizzes by sackmandan