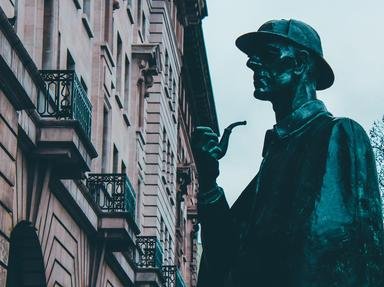 History of the Detective Novel Quiz

One of the few genres in Literature that doesn't date back to 'Olden Times' is definitely the detective story. Yet it has by now developed its own traditions, its own who is who, and its own milestone events. That's what this quiz tries to deal with.

Quiz Answer Key and Fun Facts
1. Everybody seems to agree that Edgar Allan Poe is the first to have published a detective story in the English language. Which story exactly was that?


Answer: The Murders in the Rue Morgue

Published in 1841, this story introduced the Parisian detective C. August Dupin.
2. European historians of literature, however, point out that in the Old World some stories had already been written in which the hero solves problems of detection with a combination of observation and logic. To which story in particular do they point?

The novella 'Zadig; or, The Book of Fate' was published in Amsterdam in 1747, under the title 'Memnon', before appearing with its revised title in 1748.
3. Who was the French author who created a story in which the hero is a police-officer who stubbornly pursues 'his' criminal. However, when he ultimately has managed to lay hands on him, he lets him go and ... jumps into the Seine. Who is that author?

Arsene Lupin (1907) is the sleuth created by Maurice Leblanc. Gaston Leroux (1868 - 1927) is well-known for the 'Mystery of the Yellow Room'. Hugo published 'Les Miserables', in which Inspector Javert is the principal antagonist, in 1862.
4. What was, in British English literature, the first 'detective story'?


Answer: 'The Moonstone' by Wilkie Collins

'The Moonstone' was published in 1868. Robert Eustace's real name was Eustace Robert Barton. He was a doctor who later collaborated with Dorothy Sayers (in 1930). Morrison lived from 1863 till 1945. 'A Study in Scarlet' was A.C. Doyle's introduction of Sherlock Holmes (1887).
5. Some of Dostoyevsky's novels can be viewed as (among other things) good detective stories, especially 'Crime and Punishment' in which one of the characters acts as an amateur psychologist in trying to force Raskolnikov to admit his crime. Who is that character with a special interest in the murderer's motivations?

R. first admits his crime to Zametow, but then withdraws his confession, and even ridicules Zametow for believing it. Ilya notices R.'s confusion when the crime is mentioned at the police station where R. has been summoned for a completely different matter.

He gets no opportunity, however, to complete his interrogation of R. Porfiry is the one who ultimately gets interested in R.'s 'psychology', and even develops some sympathy for his 'prey'. He will manage to drive R. into a position where he feels forced to give up himself.
6. One of the great promoters of the detective-story was undoubtedly Arthur Conan Doyle. He even got tired of his own success and wanted to kill off his hero, Sherlock Holmes. Later, however, Holmes made his re-appearance. Who was Holmes' secretive arch enemy who is mentioned in the story of 'The Final Problem' as apparently having eliminated Holmes (though not without getting killed himself in the act)?

In "The Final Problem", the only story in which Moriarty appears, he is dubbed 'the Napoleon of Crime'. It is suggested that he was the man behind many of the crimes Holmes dealt with. From a letter "left behind" by Holmes, the reader is made to believe that at the Falls of Reichenbach, Holmes and Moriarty had a duel. Both seem to have fallen to their deaths.

Col. Sebastian Moran is one of Moriarty's "agents", and his main henchman. In 'The Adventure of the Empty House', Holmes calls him "the second most dangerous man in London".
7. G.K. Chesterton also tried his hand at creating a good sleuth. What was the unusual choice he made for that role?

'The Innocence of Father Brown' appeared in 1911. Later stories include 'The Incredulity of Father Brown' and 'The Secret of Father Brown'.
8. The detective story got popular in unexpected circles. Even an English Monsignor (Ronald Knox) started to write detective stories and also compiled an excellent anthology of the 'Best Detective Stories of 1928-9'. It was especially the participation of women authors such as Agatha Christie that was remarkable. Which of these 'sleuths' appeared in her first detective novel, 'The Mysterious Affair at Styles', in 1920?

Lord Peter Wimsey is a creation of Dorothy Sayers. Dame Ngaio Marsh created Alleyn. Miss Marple appeared for the first time in 1930 in 'Murder at the Vicarage'.
9. There were more successful women detective story-writers than just A. Christie. Which of the next four is the only one who did not belong to the so-called 'Big Four'? 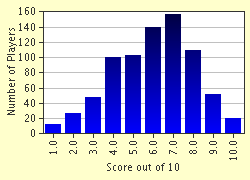