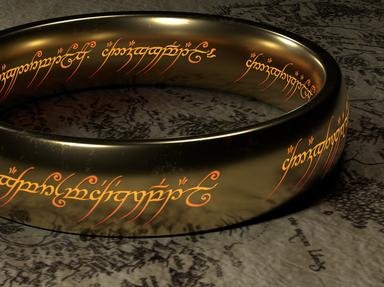 Ah the language of LOTR...This quiz isn't intended to be difficult. I recommend this quiz to only those who have thorughly read the appendices of the LOTR trilogy. Enjoy friends!

Share on Facebook
Share on Twitter
Share by E-Mail
Author
CatWoman911
Time
3 mins
Type
Multiple Choice
Quiz #
183,961
Updated
Dec 03 21
# Qns
10
Difficulty
Average
Avg Score
6 / 10
Plays
615
This quiz has 2 formats: you can play it as a or as shown below.
Scroll down to the bottom for the answer key.

Quiz Answer Key and Fun Facts
1. The elven language known as Quenya has spelling similar to what language?

The relationship between these two languages is stated in Appendix E under "Writing and Spelling".
2. In the common speech, what letter always has the value of "k" even before "e" and "i"?

An example of this is the word "celeb" meaning silver. It should be pronounced as "keleb".
3. What letter combination represents "th" as pronounced in the word "clothes"?

Though closely related, both Eldarin languages hold both unique similarities and differences. For example, the "z" sound was nonexistent in contemporary Quenya and Sindarin. However, "y" is used as a consonant in Quenya while in Sindarin, it is a vowel.
5. The letter that is considered a vowel IN SINDARIN ONLY is __.

The "sh" in Westron is also simliar.
9. In which English word is the "ty" letter combination best represented?

This quiz was reviewed by FunTrivia editor agony before going online.
Any errors found in FunTrivia content are routinely corrected through our feedback system.
Related Quizzes
1. The Lore of Middle-Earth Average
2. Language of the Silmarillion Average
3. Elvish Vocabulary from FOTR Average
4. What Are You Tolkien About? Average
5. Tolkien Translations Tough
6. Elvish Dictionary Tough
7. Quenya Vocabulary Tough
8. Quenya Meets Music Tough
9. The Elvish Language Tough
10. Quenya and Noldorin Tough
11. Languages of Rohan and Rhovanion Difficult
12. Tolkien's use of Old English Difficult


Other Destinations
Explore Other Quizzes by CatWoman911