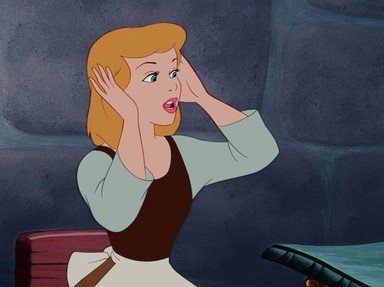 A Quiz is a Wish Your Heart Makes

This is my favorite Disney princess movie so I decided to make a quiz on it. If you've seen it as many times as I have, this quiz should be easy!

Quiz Answer Key and Fun Facts
1. After the opening narration, Cinderella is shown completing her morning routine with the help of her animal friends. What object does Jaq the mouse use for a bed?

As Cinderella tells the other animals about the lovely dream she had that night, Jaq is shown waking up and finds, much to his annoyance, his tail is tangled in knots!

This scene is set to one of my favorite Disney ballads "A Dream is a Wish Your Heart Makes", sung by the incomparable Ilene Woods who was chosen to provide the voice of Cinderella out of 309 other possible candidates.
2. When Jaq and another mouse come to tell Cinderella there is a new rodent in the house, she pulls something mouse-sized out of a drawer. What is it?

When the mice tell her that the new resident is actually a he, Cinderella swaps the dress for a shirt and cap. After rescuing him from a trap, she gives him the clothes as well as a name, Gus.

Both he and Jaq were voiced by Jimmy MacDonald who coincidentally had been the voice of Disney's most famous mouse, Mickey since 1947.
3. When the King pushes his bookends together, what are the female and male figurines on them holding respectively?


Answer: A basket, a bouquet, a hat

When we first see the King, he is in his study, ranting about how he wants to see his son married. He doesn't believe in the Duke's idea of true love and thinks that it's just a matter of meeting someone under the right circumstances. To illustrate his point, he uses the figurines on his bookends which, in a bit of foreshadowing, look a lot like Cinderella and the Prince.
4. When the stepsisters are having their music lesson, Drizella sings a song about what type of bird?

Lady Tremaine attempts to make her daughters more refined by teaching them music but it clearly won't help as Drizella sings the song about the eponymous bird very loudly and shrilly. By contrast, Cinderella, who is singing the same song while scrubbing the foyer floor sounds lilting and beautiful.

In one of the loveliest scenes, Cinderella's multiple reflections in the bubbles from her bucket start harmonizing with her. This was achieved through a process known as over-dubbing where the same voice was recorded on multiple microphones at once. "Cinderella" was the first Disney film to utilize it.
5. When the mice are fixing Cinderella's dress for the ball, what do they use as a lift to get supplies to the top?

During my favourite scene in the film, Cinderella's bird and mouse friends band together to ensure that their human friend will have a dress fit for a princess so that she may also go to the Prince's ball. The various ways they find to complete the various steps such as the aforementioned shoe-lift are just adorable! Although, keen viewers may notice that the animators made a mistake near the end as Jaq jumps from an overhead string into a chest two times in a row.
6. The Fairy Godmother turns Cinderella's dog, Bruno into her coachman.

Bruno actually becomes the footman, while her horse, Major is the coachman. Just when all hope seems lost, as her stepsisters have torn the mice's homemade dress to pieces, Cinderella's kindly Fairy Godmother appears and with a wave of her wand, ensures that she has everything she needs to go to the ball! The scene where Cinderella's rags are magically transformed into a glittering, star-studded ballgown was Walt Disney's favorite piece of animation.
7. Which of the following is NOT one of the women introduced to the Prince before Cinderella arrives at the ball?

When the ballroom is shown for the first time, the Prince is being introduced to all of the female attendees one by one as a footman reads their names aloud from a list. The three aforementioned women are all introduced to him prior to Anastasia and Drizella. Even though the Prince doesn't speak during this scene, you can easily tell he'd rather be anywhere else at the moment because after politely bowing to each guest, he shoots his father a look that says "what have you gotten me into, Dad?"
8. During "So, This Is Love", Cinderella and the Prince are seen at all but which of the following locations?

While Cinderella is at a garden bench when the Fairy Godmother appears, her and the Prince never sits on one. They start their romantic evening by waltzing out onto the terrace before descending into the courtyard to ripple the waters in an elegant fountain, dance outside the gazebo under a starlit sky and cross over an intricately decorated bridge whilst admiring their reflections in the water. Just as they are about to kiss, the clock strikes midnight! An unused concept for this scene involved the two envisioning themselves dancing in the clouds.
9. When the Grand Duke arrives at Cinderella's house, the stepmother offers him some wine?

She offers the weary Duke some tea in an attempt to make herself look gracious. It's a good thing he declines because Gus was hiding in the teacup she was about to use! Unbeknownst to the Duke, She has Cinderella locked in her attic room to prevent him from finding her. Lady Tremaine was modeled after her voice actress Elanor Audley who went on to voice the delightfully despicable Maleficent in "Sleeping Beauty" 8 years later.
10. When Lucifer has Gus trapped, the mice and birds try to scare him away with all but which of the following?

With their combined efforts, Gus and Jaq successfully retrieve the key to Cinderella's door from the stepmother's pocket. Unfortunately, the nasty cat, Lucifer traps Gus under a bowl and the efforts made by the other animals to stop him with the aforementioned objects prove fruitless. Fortunately, Cinderella comes up with a plan of her own - summon her faithful dog, Bruno to chase Lucifer away! Once all is well, Cinderella is able to prove that she is the one the Prince is looking for and gets her well-deserved happy ending!

The success of the movie when it premiered gave Disney a happy ending as well because given that it was their first full-length film following WWII, it was very expensive to make and would have ensured the demise of the company had it not turned a profit.
Source: Author smilefumble


Other Destinations
Explore Other Quizzes by smilefumble