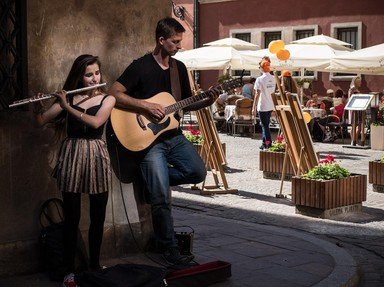 You go to a classical music concert and you look up at the orchestra (don't they look smart!)... how many of the instruments can you identify from my descriptions?

Quiz Answer Key and Fun Facts
1. This resonant instrument is unusual in the violin family as it has not always had four strings (it used to have three and now tends to have four or five). It is also often used in jazz bands.

The size of the double bass has also changed over the years, becoming smaller... and did you know that double bass music is written an octave higher than it sounds?! This means it is known as a 'transposing instrument'.
2. An instrument you blow into (not the technical term obviously!), which unusually has a double reed and conical tube. Mozart wrote a concerto for this instrument which remained lost until comparatively recently. Haydn also wrote a(n) ________ concerto.

Oboes (or similar) are very ancient instruments... in fact, there is a site in Scotland by the Forth River, where a wall painting created in 2 A.D. depicts a man playing one. By the sixteenth century Shawms (as they were then called) were identifiable as the precusors of the modern oboe.
3. Translated from the German, this member of the percussion section means 'bell-play'.

A new form of glockenspiel called a tubophone has appeared, which is played via a keyboard rather than two hand-held hammers.
A xylophone looks similar to a glockenspiel but the bars are made of wood, not metal. A celesta is similar to a glockenspiel but has wooden resonators attached to the bars. A bellenspiel is entirely made up!
4. This instrument used to be called the 'sackbut'. It is found in the brass section and is unusual as it is not operated by pistons.

The pistons are replaced by the sliding mechanism, which does exactly the same job of extending the length of tubing used to play a note and therefore making the note sound lower.
5. A member of the woodwind family, this instrument has a single reed, a cylindrical bore and mouthpiece. It is a relative newcomer to the classical orchestra.

The poor clarinet was not included in classical orchestras on a regular basis until the 18th century. Mozart played an important role in making the clarinet popular, not only including it in his symphonies, but also writing a clarinet concerto and clarinet quintet.
6. This instrument has existed in various forms since ancient times. It consists of many strings stretched over a frame and is caused to sound by the player's fingers on the strings. There are also seven pedals which are pressed to alter the pitch.

The harp was popular in Victorian drawing rooms possibly due to its displaying of feminine arms in motion and the graceful body movements. The Victorians were not nearly as uptight as some history books would have you believe!
7. A metal bowl with a membrane stretched across the top is struck with sticks with blobs of 'stuff' on the ends. Keys at the side of the metal bowl can be turned to pinpoint the exact tone required.

The timpani, or kettle-drums, are the only drums from which a definite tone is possible (the tightening and loosening of the membrane will tune the drum before a performance). The 'stuff' on the ends of the drum sticks is varied, according to what kind of sound is required from each strike on the drum.
8. Two of the most famous players of this string instrument are Niccolo Paganini and Yehudi Menuhin. Beethoven only wrote one concerto for the instrument though... (more's the pity...)

You will no doubt know that old violins were strung with cat gut... but did you know that modern violin strings tend to be steel or gut-covered steel? The bow is strung with horsehair. The Beethoven violin concerto is in my opinion one of the most wonderful pieces of music (classical or otherwise) ever written.
9. This brass instrument is a mass of tubes. They curl around and across and around and so it looks like a bell at the end, a mouthpiece at the beginning and a circular mass of brass tubes in between...

The French horn evolved from the hunting horn. The horn family has evolved since those days of course, and the average length of a musical horn nowadays is eleven feet. That is to say there is eleven feet of tubing wrapped and wound into a compact space to form an instrument of some significant power.
10. The player of this woodwind instrument blows across a hole in the head of the instrument, which vibrates the column of air within the tube, producing a breathy sound.

Flutes orginially evolved into two branches, one end-blown and the other side-blown. Needless to say, in the modern orchestra, the side-blown flute is the one featured (in dictionaries now, the end-blown flutes tend to be classified under the recorder family).
Source: Author Flapjack44 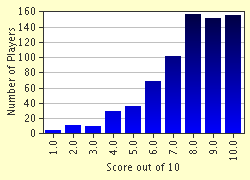 
Other Destinations
Explore Other Quizzes by Flapjack44