So you think you know the Red Hot Chili Peppers?

Share on Facebook
Share on Twitter
Share by E-Mail
Author
Makky
Time
4 mins
Type
Multiple Choice
Quiz #
192,242
Updated
Dec 03 21
# Qns
10
Difficulty
Tough
Avg Score
6 / 10
Plays
717
This quiz has 2 formats: you can play it as a or as shown below.
Scroll down to the bottom for the answer key.

Quiz Answer Key and Fun Facts
1. What year did the Peppers bring out their debut album?

This was one year after their formation, in 1983.
2. What is the name of lead singer Anthony Kiedis' famous father?

Dammett is considered by Kiedis as more of a brother than father, with the two hanging out together often.
3. In 2003, the Peppers performed in front of 80,000 people at Ireland's Slane Castle. Which county is the castle in?

A fire in the castle prevented concerts being held there before 1998, however it is now a popular concert site for famous bands.
4. Former drummer D.H. Peligro played for which band, other than the Peppers?

Peligro recently released a punk cover of Jimi Hendrix's "Purple Haze", which has received rave reviews around the world.
5. Which singer did the Peppers perform with in Hyde Park in June of 2004?

The band played three concerts in Hyde Park in four days, attracting massive crowds.
6. What is the only song off "One Hot Minute" that the Peppers have played in concert since John Frusciante rejoined the band?

According to Flea, Frusciante has never even listened to the album, having been in rehab at the time of recording.
7. Which guitarist played on "One Hot Minute"?

Navarro was the guitarist in another band, Jane's Addiction, that Flea has performed with.
8. On the live DVD, "Off The Map", the Peppers perform a 12 minute song which isn't on any of their albums. What song was it?

"Search And Destroy" is off the album, "The Beavis and Butthead Experience".
9. The song "Emit Remmus" (off "Californication") is written about which member of the Spice Girls who had a brief relationship with Anthony Kiedis?

Sporty admits that she went to dinner with Kiedis, but claims there was no "romance".
10. Which guitarist made an extremely brief appearance in the band after Arik Marshall was dropped?

This quiz was reviewed by FunTrivia editor ralzzz before going online.
Any errors found in FunTrivia content are routinely corrected through our feedback system.
Most Recent Scores
Jan 14 2023 : Guest 98: 10/10
Dec 16 2022 : Guest 180: 7/10 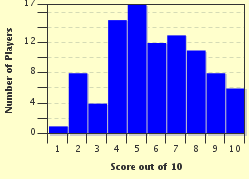 
Other Destinations
Explore Other Quizzes by Makky