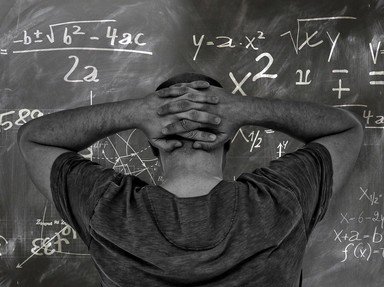 The Death of a Mathematician Trivia Quiz

In addition to interesting proofs and theorems, mathematics has been the scene of many interesting deaths, some of which have become lost in the fabric of legend.

Quiz Answer Key and Fun Facts
1. Which mathematician, perhaps best known for his namesake coordinate system, can be said to have died from getting up too early in the morning?

Ever since he was young Descartes had been in poor health, and his doctor's recommendation was that he spend his mornings in bed (legend has it that he came up with the idea for Cartesian coordinates by watching a fly crawl across his ceiling one of those mornings.) Unfortunately, the Swedish princess he was tutoring had an insatiable urge to draw tangents at 5 in the morning, and Descartes soon caught pneumonia and died.
2. Which mathematician, one of the first to describe the situations under which the solution to an equation can be written down exactly, was killed in a duel at the tender age of 20?

The duel was fought over the attentions of Stephanie-Felice du Motel (and you thought mathematicians never got the girls). Legend has it that Galois spent the night before the duel pouring out all his mathematical knowledge onto paper so it wouldn't be forgotten (this is probably exaggerated, although he did write a manuscript that night). Regardless, it took nearly 15 years after his death before mathematicians realized the full import of young Galois's ideas.
3. What man, discoverer of the (In)Completeness theorem for logical systems, managed to starve himself to death?

Near the end of his life, Gödel (who had previously been forced to flee Nazi controlled Austria just before the outbreak of the Second World War) started becoming convinced that people were attempting to poison his food, so he stopped eating. Unfortunately, this led to results as bad as any poison.
4. What mathematician spent his final days defending Syracuse against the invading Romans, only to be killed by a soldier who supposedly saw him working out diagrams in the sand?

Much of his work was designing ballistic systems and siege engines for use against the Romans, so these diagrams may not have been so benign. His last words may have been, "Don't disturb my circles!"
5. Which Norwegian Mathematician, who helped found group theory, died in poverty just days BEFORE receiving his first appointment in Berlin?

Due to his poverty, Abel was forced to travel by sled when he wanted to visit his fiancee (See? Another Mathematician who found a love interest!). On one of those trips, he took sick and died soon after. If the job had only come a few weeks earlier...
6. Moving a bit further afield into POTENTIAL deaths, which mathematician, facing a trip across the storm-wracked North Sea in a rickety boat, sent a telegram ahead falsely claiming that he had solved the Riemann Hypothesis (one of the most important unsolved problems in mathematics)?

The avowed atheist claimed (likely jokingly) that no just God could possibly permit him to be killed with the false prestige of having solved the famous problem (which is still today unsolved).
7. What mathematician, faced with the twin handicaps of being a woman in a man's world and a Pagan in a Christian nation, was finally murdered by a mob in 415 AD?

The mob, which according to some stories was led by monks, assaulted her in the street and sliced off her skin with shards of broken tile. Ouch!
8. What pioneer in the field of computer science and namesake of a test for artificial intelligence was found dead with a half-eaten, cyanide laced apple beside him?

It is believed that the apple was a successful try at suicide, orchestrated carefully so that his mother could still live out her days believing he died in a chemistry accident.
Turing's life was made miserable during his last years due to his public declaration of his homosexuality, which at that time was considered not only immoral but a crime.
9. What pioneer in the application of rigorous methods to political science was found dead of mysterious causes in a prison cell during the French reign of terror?

Condorcet was the first to consider and attempt to overcome the paradox (now named after him) that a group of 3 voters, voting by majority rule, can prefer A to B, B to C, and C to A simultaneously. It is unknown whether his death came from murder, suicide, or natural causes.
10. What cofounder of the modern theory of games helped the U.S. military develop atomic and hydrogen bombs, only to die of brain cancer a few years later in 1957?

Among his many other achievements, Von Neumann helped in the theory and design of the first computers, advocating the adoption of the bit as a standard for measuring memory. Although it is unknown whether the radiation from the nuclear bombs caused his cancer, it certainly made it more likely.
Source: Author kevinatilusa 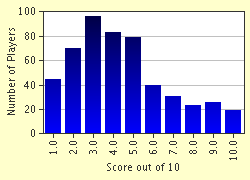 
Other Destinations
Explore Other Quizzes by kevinatilusa