This quiz is about ten American religious figures that run the gamut from idolized to loathed and from devoutly puritanical to unabashedly atheist.

Quiz Answer Key and Fun Facts
1. What is the name of the Spanish friar who spread Christianity across the California and founded many missions along the way?

Serra is among the most famous religious figures in American history, especially on the west coast. He founded missions along the California coast in places like San Diego, Carmel and San Francisco. He was beatified by Pope John Paul II in 1988, an action that started the process of canonizing him as a saint.
2. Elijah Muhammad, who mentored many famous people including Muhammad Ali and Malcolm X, was the leader of what organization from 1934 to 1975?

The Nation of Islam is a controversial group that aims to empower African-Americans. The group is considered to be a hate group by the Southern Poverty Law Center because of its perceived racism.

Elijah Muhammad was born Elijah Poole and was a Muslim convert. He was also a controversial figure and advocated for black supremacy. Religiously, he helped Islam gain followers in the United States by establishing social programs to help the poor. Muslims increased in numbers during his leadership of the Nation of Islam, both those belonging to the organization and those not.
3. In 19th century New Orleans, Marie Laveau was a popular priestess of which religion, commonly associated with the city?

Marie Laveau was a voodoo priestess who was popular with both whites and blacks who would often mingle together in her presence, despite severe racial tensions at the time. Laveau herself was of mixed ethnicity. Both of her parents were white and black but free. Laveau remains a popular legend in New Orleans.

Although it is not certain where she is buried, a tomb that allegedly belongs to her is frequently painted with an X as part of a ritual when asking her for help. Since March 2015, the Saint Louis Cemetery No. 1, where Laveau is said to be buried, requires a tour guide and visitors can no longer wander the grounds alone, in an attempt to prevent vandalism.
4. Which Mormon leader is sometimes nicknamed "The American Moses" because he led his followers through the desert after being forced out from Illinois in 1847? He also founded Salt Lake City, and a university in Provo is named after him.

Mormonism was founded in Nauvoo, Illinois by Joseph Smith. Because of their beliefs which included things like polygamy, the Mormons were treated terribly in the region and Young led them through the desert to Utah, where he established Salt Lake City. Young was president of the Quorum of the Twelve Apostles, the Mormons' inner circle, before he became President of the Church in 1847.

Young was also an influential politician. He was Governor of Utah Territory when it was founded and he helped build bridges and roads that connected Salt Lake City to California. He also helped found what would later become Brigham Young University and the University of Utah.
5. Mary Baker Eddy, the founder of Christian Science, was often criticized by which famous American humorist?

Christian Science is rooted in the belief that illness and affliction can be overcome by prayer alone. There was controversy at the time whether or not Eddy had plagiarized this idea from various other people. While Twain did not accuse her of so, he did accuse her of being more concerned about making money and earning fame than she was about her actual cause, and called Christian Science a business. Twain had a difficult time getting his criticism published and accused publishers of being in Eddy's pocket. There were also rumors swirling around started by Eddy's former students who left the church that she was addicted to morphine and was mentally unstable.

Today, there is less controversy surrounding Eddy and she is generally remembered for her work in promoting Christian Science and for founding the "Christian Science Monitor", the church's newspaper.
6. Anne Hutchinson was an American colonial woman from Massachusetts Bay Colony who helped found which U.S. state, with Roger Williams, after her religious views got her expelled from the colony in 1638?

Although there were many disagreements between Hutchinson and Puritanical leaders, the final straw was the Antinomian Controversy in which Anne and others criticized the local religious leaders for preaching a covenant of works, meaning that those who do good works will achieve eternal life. Anne was a proponent of a covenant of grace, meaning eternal life would be granted to those who have faith.

She was excommunicated for her actions and founded Portsmouth, Rhode Island after Roger Williams, who had experienced a similar ordeal, encouraged her.
7. What is the name of the 1950 self-help book written by L. Ron Hubbard that served as the basis for Scientology?

"Dianetics: The Modern Science of Mental Health" was originally published as a self-help book to help people overcome traumatic memories called engrams. His process called auditing refers to the counseling that is needed to overcome the engrams. His book was widely criticized as having no medical evidence. The book was successful however and became a key work for Scientology.
8. Madalyn Murray O'Hair, who was once called the most hated woman in America by "Time" magazine, founded which organization in 1963?

Murray received the title of the most hated woman in America because of lawsuits that fought against prayer and Bible readings in public school, which her son was forced to participate in, and other actions aimed at curbing religious influence in public life.

Her efforts were mostly successful and she won the landmark case Abington School District v. Schempp (which was consolidated with her case), which abolished prayer in public school. She was murdered by a former member of American Atheists in 1995. Since then, commentators have noted that hatred of her has died down as public support for religion in public spheres has declined and with the rise of the Phelps family of the Westboro Baptist Church, which has been called the most hated family in America.
9. Elizabeth Ann Seton is often considered the first native born American citizen to be canonized as a Roman Catholic saint. But who, in 1946, became the first American saint, even though she was a naturalized citizen?

Frances Xavier Cabrini, commonly known as Mother Cabrini, was born in Austria and came to the United States as a missionary in 1889. She is the patron saint of immigrants and hospital administrators.

Technically, Elizabeth Ann Seton is not the first native born "American" Saint. She was born in New York in 1774 just before American independence, which made her briefly a British subject. She is, however, commonly called the first native-born American saint in official channels. St. Katharine Drexel is the first American saint to be born an American citizen. Seton is the patron saint of Catholic schools and the state of Maryland.
10. What is the name of the former slave who founded the US's first independent black church, the African Methodist Episcopal Church?

Richard Allen was born in 1760 as a slave and saw his family torn apart when some of them were sold to different plantations. He bought his freedom in 1780 and joined a Methodist church. Allen eventually founded the Free African Society as an organization to help freed and fugitive slaves. Allen then founded the African Methodist Episcopal Church after St. George's, the Methodist Church he preached at, only let him give sermons in the morning so as not to offend the white parishioners with the black crowds Allen drew.
Source: Author Joepetz 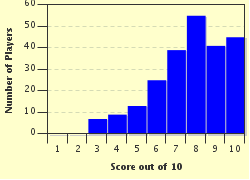 Related Quizzes
This quiz is part of series Quizzes with Nothing in Common:

Some of my quizzes that I like but don't belong to a particular series or group.


Other Destinations
Explore Other Quizzes by Joepetz