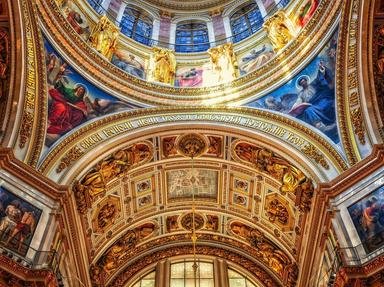 I recently had fun doing a quiz of the hour by MrNose based on the 'Jeopardy!' theme and I was inspired to compile this quiz. I give you the answer and you pick the correct question. ('Jeopardy!' host Alex Trebek comes from the same district as I do.)

Quiz Answer Key and Fun Facts
1. A former tax collector and member of the original Twelve Disciples who is generally considered to have written the first book of the New Testament


Answer: Who is Matthew?

Matthew, a former tax collector and a member of the original Twelve Disciples, was the author of the Gospel of Matthew, the first book of the New Testament. Matthew is the only book in the New Testament to tell of Jesus healing two blind men (9:27) and curing a demon possessed mute man (9:32) as well as telling of the temple tax being miraculously found in the mouth of a fish (17:24.) A number of parables are also found in Matthew and nowhere else in Scripture.
2. The sisters of a man raised from the dead by Christ at Bethany


Answer: Who are Mary and Martha?

Mary and Martha were sisters of Lazarus, a man who was raised from the dead by Christ at Bethany. According to Scripture, Lazarus had been dead for four days when Christ performed the miracle. In Biblical times, Bethany was a small village just outside Jerusalem. For details about Jesus raising Lazarus from the dead, see John 11:1-45.
3. The member of the original Twelve Disciples who raised a woman from the dead


Answer: Who is Peter?

Peter, a member of the original Twelve Disciples, raised Tabitha, also known as Dorcas, from the dead. Tabitha/Dorcas was a widow who lived in Joppa and was known for her good deeds. Details about Peter restoring life to the woman are found in Acts 9:36-43. Going by Scripture, Peter raised Tabitha/Dorcas from the dead just after he miraculously healed Aeneas, a paralytic who had been bedridden for eight years.
4. The man who was blinded for three days while he was travelling on the road to Damascus


Answer: Who is Paul?

Paul ended up being blinded for three days after he had a dramatic encounter with the Lord Jesus Christ. Acts 9:1-19 tells of Paul, who was known as Saul at the time, encountering Jesus in the form of a highly brilliant light while he was traveling on the road to Damasucs.

The passage tells of Paul ending up in the house of a man called Judas who lived on Straight and then Ananias visiting him three days later. It was when Ananias laid his hands on Paul scales fell from his eyes and he was able to see once again.
5. The Roman governor who freed Barrabas and sentenced Jesus to death by crucifixion


Answer: Who is Pilate?

Pilate, the Roman governor, was responsible for ordering the execution of Jesus by crucifixion, as per Matthew 27:15-26. Even though Pilate confessed he could not find Jesus guilty of any crime, he went ahead with his controversial decision. On top of this, Scripture states Pilate's unnamed wife confessed to him she had a dream regarding Jesus and she urged her husband not to cause Him any harm.

Just before Pilate rendered his decision, Scripture states he asked an unruly mob if they wanted Jesus or a notorious prisoner called Barabbas released, as part of the Passover celebrations. The crowd responded Jesus should be crucified and Barabbas should be set free.

Pilate gave in to their demands and the rest, as they say, is history.


Answer: Who are Zacharias and Elizabeth?

Zacharias, known as Zachariah in the NIV Bible, and Elizabeth were the elderly parents of John the Baptist. Luke 1:5-25 tells of the angel Gabriel announcing the impending birth of John to an incredulous Zacharias. Due to the fact he and his wife were childless and elderly, Zacharias initially refused to believe the news the angel divulged.

John the Baptist would become the forerunner of Christ by preaching a message of repentance to the people of Israel.
7. The prophet who bound his hands and feet to illustrate the grim future Paul faced


Answer: Who is Agabus?

Agabus was the prophet who bound his hands and feet with a belt to illustrate the future Paul faced if he proceeded with plans to visit Jerusalem. Scripture states others who saw Agabus' graphic illustration pleaded with Paul not to visit Jerusalem. Paul, however, was not swayed. The apostle to the Gentiles is is quoted as saying: "What do you mean by weeping and breaking my heart? For I am ready not only to be bound, but also to die at Jerusalem for the name of the Lord Jesus."

Scripture goes on to tell of the people being persuaded by Paul's statement and proclaiming, "the will of the Lord be done." Sure enough, Paul would end up being arrested and eventually transported to Rome to appear before Caesar.

For details about Agabus, see Acts 21:1-14.
8. The recipient of two letters from Luke


Answer: Who is Theophilus?

Theophilus received two letters from Luke, a physician and worker in the early church. Those letters are now featured in two New Testament books -- the Gospel of Luke and the Book of Acts. The Gospel of Luke provides details about the birth of Jesus Christ and His ministry, while the Book of Acts records the history and growth of the early church.

No one knows for certain who Theophilus was. However, there are a number of theories about his identity. Some believe he was a high-ranking official with the Roman government while others believe he was a wealthy and influential man in Antioch.

According to various Websites, Theophilus literally means "loved by God".
9. The woman whose household members told Paul about divisions in the early church at Corinth


Answer: Who is Chloe?

Paul states in 1 Corinthians 1:11 that "those of Chloe's household" had made him aware of divisions in the early church at Corinth. Little is known about Chloe and her household as both are mentioned in passing reference.

In 1 Corinthians, Paul urges believers to put aside their differences and to glory only in the Lord. The thirteenth chapter of 1 Corinthians is popular with tens of millions of Christians around the world. It is known as the Love Chapter.
10. The master of a runaway slave who received a passionate letter from Paul to accept the slave back as an equal in Christ


Answer: Who is Philemon?

Philemon received a passionate letter from Paul to accept back Onesimus, his run-away slave, as an equal in Christ. The letter has become part of the New Testament and is known as Philemon.

According to Scripture, after Onesimus ran away from his master, Paul converted him to Christianity. Ironically, Onesimus' master was Philemon, an old friend of Paul's.
Source: Author Cowrofl