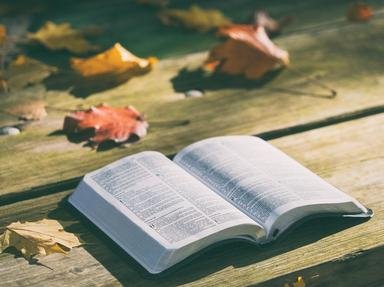 Share on Facebook
Share on Twitter
Share by E-Mail
Author
bigwoo
Time
3 mins
Type
Multiple Choice
Quiz #
274,808
Updated
Dec 03 21
# Qns
10
Difficulty
Average
Avg Score
8 / 10
Plays
2139
Awards
Top 20% Quiz
This quiz has 2 formats: you can play it as a or as shown below.
Scroll down to the bottom for the answer key.

Quiz Answer Key and Fun Facts
1. Which Bible "D" was thrown into a lion's den?

In Daniel 6:1-28 we read that Daniel was thrown into the lion's den because he purposely disobeyed a royal decree that prohibited prayer to any other being except the ruler, Darius the Mede. In this case, God delivered the prophet from death -- and according to the book of Daniel, Darius admitted that Daniel's God was supreme.
2. Which apostle was also known as Didymus?

"Didymus" is a Greek word for "twin". John calls Thomas, which is a transliteration of the Aramaic word for "twin", Didymus in John 11:16, 20:24 and 21:2. Thomas is also known for another "d" as he doubted the resurrection of Jesus and said that unless he touched the pierced side and felt the nail holes in Jesus' hands he would not believe that Christ arose from the dead. According to John 21 he met Jesus and is convinced. Tradition states that Thomas was later martyred in India.
3. What Christian woman, noted for her acts of charity, was raised from the dead by Peter?

In Acts 9:36-41, Peter went to Joppa were he found a group of mourners grieving over the death of Dorcas (also called Tabitha). They showed Peter the many clothes she had made for them and Peter raised her from the dead. It was the first biblical record of an apostle performing this type of miracle.
4. What is the meaning of the word "Deuteronomy"?

Deuteronomy is the fifth book of the Old Testament and the last of the five books of the Law. The book represents Moses' teachings to a new generation of Israelites, explaining their responsibilities in light of the previous generation's unfaithfulness. While Moses reveals to them the law, he also stresses the relationship God desires to have with them. Most of the previous generation had died while wandering in the wilderness for forty years.

The name Deuteronomy comes from a mistranslation into Greek of the Hebrew name (which means "There are the words", the opening line of the book).
5. In Mark chapter 5 Jesus found a man who lived in a cemetery. From what did Jesus deliver him?

The spirit in this man told Jesus that his name was Legion "for we are many". Nor only did he live in a cemetery, he cut himself with stones and was unable to be captured by neighbors. The Bible teaches that demons are spiritual beings that work for Satan in attempt to oppose God and deceive people.

There are several ideas on what constituted "demon possession" in the Bible and there are mixed opinions on whether the phenomenon exists today.
6. Who betrayed Samson to his Philistine enemies?

Delilah was offered a bribe by the Philistines if she could find the secret of Samson's great strength. On her fourth attempt she finally discovered that by cutting his hair (a violation of his Nazarite vow - Numbers 6:1-8) Samson would lose his God-given strength.

She cut his hair and delivered him to his enemies. Rembrandt vividly portrays this betrayal in his painting showing Delilah fleeing the room with scissors and her lover's hair in her hands while the Philistines are gouging Samson's eyes.

The story is found in Judges 16.
7. In which of the Apostle John's writings was Diotrephes reprimanded for his prideful, contentious behavior?

In 3rd John the apostle charges Diotrephes with loving to "be first", with putting those who disagree with him "out of the church", malicious gossip, and being inhospitable to other believers. It is possible he was an official church leader who was abusing his position. John said he would deal with Diotrephes personally if he visited the recipients of the letter.
8. According to Matthew, what final instruction does Jesus give the remaining eleven apostles?


Answer: Make disciples of all nations

In Matthew 28 Jesus, in what is referred to as the Great Commission, states he has been given "all authority in heaven and earth". He then charges the eleven remaining apostles (Judas was dead), to "go and make disciples of all nations baptizing them in the name of the Father, Son and Holy Spirit".
9. What power did Joseph and Daniel both display in the Old Testament?

Like most of the ancient world, people of the Old Testament believed that God communicated through dreams. Joseph's interpretation of dreams allowed him to be freed from prison and helped him to rise to political power in Egypt (Genesis 40:8, 41:7-39). On at least two occasions Daniel interpreted dreams for Nebuchadnezzar (Daniel 2 and 4). Both men unashamedly gave God credit for their ability.

The vast majority of dreams mentioned in the Bible occurred in Genesis and Daniel. And in the 1,000 year period between Joseph and Daniel, only two dreams are recorded: Gideon's dream (Judges 7:13-15) and Solomon's dream (1 Kings 3:9).
10. Which of these was one of the eleven Jerusalem gates repaired by Nehemiah?

The Dung Gate was located near the southwest corner of the city. There are different views regarding the naming of the gate, with the most prevalent one being that the gate led to the Valley of Hinnom which served as the rubbish dump for the city. Josephus referred to it as the Essenes Gate and it is also known as the Gate of the Moors, because of the North African immigrants who lived near the gate in the 16th century. Malkijah, the son of a local ruler, led the unpleasant and probably smelly task of repairing this gate during Nehemiah's rebuilding project (Nehemiah 2:13, 3:14).
Source: Author bigwoo

This quiz was reviewed by FunTrivia editor CellarDoor before going online.
Any errors found in FunTrivia content are routinely corrected through our feedback system.
Most Recent Scores
Oct 17 2022 : Guest 70: 9/10
Oct 02 2022 : kstyle53: 10/10 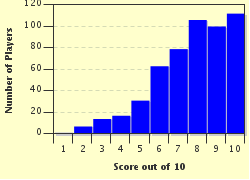