The Scriptures are full of messages of hope, wisdom,love,and truth. They also record some of the more bizarre and shocking events in history as well as history yet to be. Here are a few examples. (NIV, NASB, KJV used)

Share on Facebook
Share on Twitter
Share by E-Mail
Author
pgapgapga
Time
5 mins
Type
Multiple Choice
Quiz #
187,670
Updated
Dec 03 21
# Qns
10
Difficulty
Tough
Avg Score
6 / 10
Plays
1675
This quiz has 2 formats: you can play it as a or as shown below.
Scroll down to the bottom for the answer key.

Quiz Answer Key and Fun Facts
1. In the garden of Eden, we are told that the serpent speaks to Eve and tempts her with the fruit. What other animal literally speaks to a human in the Bible?

Numbers 22:2-35 records Balaam's life saving interaction with his beast of burden.
2. Who was the only woman to sit on the throne of Judah?

2nd Chronicles 22:10-15 explains that when her son was killed she in turn had all her grandchildren killed (but missed one she didn't know about). Also found in 2nd Kings 11:1-16.
3. In the Millennial Kingdom, who gets to eat with whom?


Answer: The wolf and the lamb

Isaiah 65:25 refers to this dining reservation.
4. Which brother was intimate with his sister?


Answer: They all were

Gen. 5:4 tells of Adam's procreating for another eight hundred years, having both sons and daughters, and those sons and daughters would have also have married and had offspring. Sarai was Abram's half sister (Gen. 20:12), and Amnon violated his sister Tamar as recorded in 2nd Samuel 13:1-39.
5. Men are encouraged to study the Word of God and learn specific things. Which subject of study is specifically encouraged in Scripture? (NASB and KJV)

A little tongue-in-cheek; in Ephesians 5:22 the NASB and KJV use the wording "Wives, be subject to your own husbands", and while that refers as a direction to the wife, we as husbands would do well to study and learn our wives so as to be the kind of husband God has called us to be. (Ephesians 5:25-31)
6. Who publicly cursed and threw stones at an Old Testament king and was not harmed?

2nd Sam. 16:5-13 relates this one of several low points in David's life, yet David's character is such that he takes the high road and allows God to judge and reward.
7. Who deliberately and flauntingly spent the night with his father's wives?

At his advisor Ahithophel's request, Absalom holds "tent" services in Jerusalem with David's concubines (2nd Sam. 16:21-22). Judah unwittingly joined with his widowed daughter-in-law(Gen. chapter 38). While Ahab does a lot of nasty things, this one wasn't mentioned. Reuben, Jacob's first born son, was with one of his father's concubines and got found out-and disinherited (Gen. 35:22, 49:4).
8. What was the fate of Jezebel?


Answer: Thrown out the window, trampled by horses, and eaten by dogs

2nd Kings 9:30-37 records this fulfillment of prophecy given by Elijah in 1st Kings 21:23.
9. What couple died as a result of lying to the Holy Spirit?

It's not nice to try and fool pastor Peter! This couple died for lying to the Holy Spirit, and seeking to elevate themselves in a perceived act of sacrifice. Your sins are going to find you out! (Acts 5:1-11) Herod died after accepting the praise of the crowd as if he were a god. (Acts12:19-23) Barak was a somewhat timid warrior who needed a prophetess as a security blanket before engaging in the battle he was called to fight. (Judges 4:1-23)
10. Paul survived many encounters that would have left others dead. What was NOT a potentially lethal incident that happened to Paul?


Answer: Falling asleep and then out a third story window

The Book of Acts is full of the life and physical sufferings of Paul. His epistles also refer to some of the terrible consequences he experienced for sharing the Gospel. But the out-of-the-window episode happened to one of Paul's less attentive congregation in Acts 20:7-12. (He returned to life)
Source: Author pgapgapga 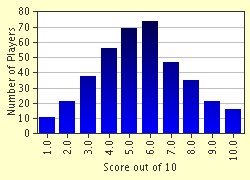 
Other Destinations
Explore Other Quizzes by pgapgapga