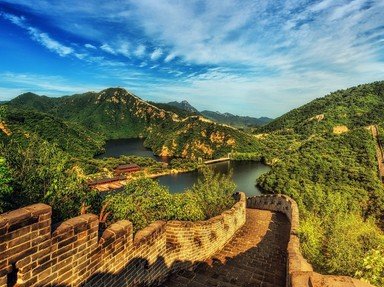 
The Three Kingdoms Period (220 AD-280 AD)
After the fall of the Han Dynasty, China was split into three states: Wei (north of the Yangtze), Shu (in the southwest), and Wu (in the southeast). The famous novel, "The Romance of the Three Kingdoms", was based on this period and was probably the most well-read novel in East Asia.
2. The Jin Dynasty


The Jin Dynasty (265 AD-420 AD)
The Jin dynasty was founded in 265 AD by the chancellor of the Kingdom of Wei, Sima Yan. He forced the last emperor of Wei, Cao Huan, to turn over his throne and proclaimed himself as Emperor Wu. He unified the nation by conquering the Kingdom of Shu and the Kingdom of Wu.


Sui Dynasty (581 AD-618 AD)
Yang Jian aka Emperor Wen was the founder of the Sui Dynasty. In 581, he took over Northern Zhou kingdom through a military coup and renamed it the Sui Dynasty. The dynasty lasted for 38 years under the reign of the second Sui Emperor Yang. He over taxed the people when millions were ordered to build the Grand Canal. He also made unsuccessful attempts to conquer Korea and Vietnam.
5. Tang Dynasty


Tang Dynasty (618 AD-907 AD)
The Tang Dynasty was considered the most glorious period in Chinese history. Li Yuan, the chief officer of Taiyuan, rebelled against the tyrannical rule of Emperor Yang of Sui dynasty. He established the Tang Dynasty in 618 AD after Emperor Yang was killed, setting up the capital in Chang'an (present-day Xian). In 627, he was succeeded by his second son, Li Shiming aka Emperor Taizong. Under his wise rule, the country achieved unparalleled prosperity and stable social order. The country opened its boundaries to foreign countries.
6. Five Dynasties and Ten Kingdoms

Pottery with "white ceramics" appearance was develop this period. Painting with "varied landscape" inspired by Taoism was fully developed, which depicted the landscape such as mountains as places between heaven and earth as harmony in nature.
7. Song Dynasty


Song Dynasty (960 AD-1279 AD)
In 960, Zhao Kuangyin, general of the Northern Zhou army, rebelled against his own king and established the Song Dynasty. He proclaimed himself as Emperor Taizu and took 20 years to conquer the rest of China to establish the Song dynasty.

The Song dynasty could be divided into two main periods:

Northern Song dynasty (960 AD - 1127 AD)
This was period where the capital was established in present-day Kaifeng in Henan Province. The Song dynasty ruled for 167 years until Kaifeng was captured by the Jin who were of Jurchen descent. The Jurchens were semi-nomadic tribes living in north-east China, renamed as Manchus in 1635.

Southern Dynasty (1127 AD - 1279 AD)
The capital was established in present-day Hangzhou in Zhejiang Province by Zhao Gao aka Emperor Gaozong. The dynasty lasted for 152 years until it fell to the Mongol-led Yuan dynasty.


Yuan Dynasty (1271 AD-1368 AD)
Genghis Khan unified the Mongol tribes when he established the Great Mongol Empire in 1206, after he conquered the Western Xia, Jin and Liao in northern China. It was his grandson, Kublai Khan, who established the Yuan Dynasty after he conquered the Southern Song dynasty. He set up the capital at Dadu, present-day Beijing. It was first foreign established empire in China. The Yuan dynasty fall to the Ming dynasty after 97 years of rule.
9. Ming Dynasty


Ming Dynasty (1368 AD-1644 AD)
In 1368, Zhu Yuanzhang aka Emperor Hongwu established the Ming Dynasty after he defeated the Yuan Dynasty. He made Nanjing the capital.

In 1402, Zhu Di, fourth son of Emperor Hongwu took over the throne from his nephew, Zhu Yunwen. He moved the capital to Beijing. During his reign, Admiral Zheng He and his fleets made seven expeditions to South-East, India, Middle East, and perhaps even beyond.


Qing Dynasty (1644 AD-1912 AD)
The Qing dynasty led by the Manchus was the last imperial Chinese dynasty. The dynasty was powerful during the reigns of the first four rulers. The empire started to decline in the 1840s, after they lost the First Opium War to the British. Hong Kong was given to the British in 1842 after the Treaty of Nanking. From the next 60 years, they lost more territories to foreign invaders. Taiwan was annexed by Japan in 1895 after they lost the first Sino-Japanese War.

After 268 years of rule, the last imperial dynasty was overthrown and China became a republic.

Kangxi Dictionary (named after the third emperor) was published in 1716. The dictionary contains more than 47000 characters grouped under 214 radicals. It was the de facto standard used as the basis for modern Chinese dictionaries
Source: Author sw11

Related Quizzes
This quiz is part of series Chinese Dynasties: