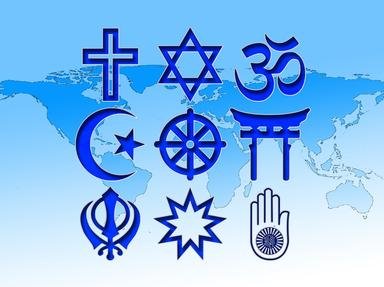 Shinto - The Way of the Gods Trivia Quiz

Central to the Shinto faith is the belief that everything on earth possesses an energy or spirit that becomes a sacred and supernatural power after death and which should be venerated. Let's explore this religion and some of its concepts.
This is a renovated/adopted version of an old quiz by author sunshine7

Shinto is the oldest known religion in Japan and is considered to be the country's indigenous faith. Although no-one knows for certain, it is estimated that it originated during the Yayoi Culture which flourished between 300BC and 300CE. It has no recognised founder, but developed as a way of protecting the country's traditional beliefs from the influence of Buddhism which was introduced to Japan around the 6th century.

It is the largest religion in Japan, although it does not require followers to declare themselves. The name, Shinto, arises from the combination of two kanji, the characters used in Japan's system of writing, 'shin' which means gods or spirits and 'to' which means path or way. In this way, Shinto is translated as "Way of the Gods".
2. In Shinto what is a kami?

In Shinto, there is no one single all-powerful god. Shinto deities are sacred spirits, known as kami. These are spirits of things that are important for the creation and continuation of life. Examples of kami are rivers, rocks, mountains, islands, fish, rice, the sun and people. Followers of Shinto believe that kami control natural forces and that they can influence events so they are revered and worshipped. Most Shinto rituals are methods of regulating relations between humans and kami.

Followers of Shinto believe that when a human dies they become kami, so the veneration of ancestral kami plays a central role in the life and culture of followers. The collective term for kami is "Yaoyorozu no Kami" which literally means eight million kami. This is not an exact number, but is meant to suggest that kami exist in infinite numbers.
3. What is the role of Izanagi and Izanami in the Shinto religion?


Answer: They are creator deities

According to the Shinto creation myth, Izanagi and Izanami are the twin bother and sister who were the last two of the seven generations of primordial deities who appeared after the formation of heaven and earth. Izanagi-no-Mikoto is "He who Invites" and his sister is Izanami-no-Mikoto, "She who Invites". According to the myth, they united and together created the islands of Japan by standing on the 'Ama-no-Hashidate', the bridge that connected heaven and earth and dipping a jewelled spear called 'Ama-no-Noboko' into the sea and stirring it. When they withdrew the spear, a drop of water fell from its tip, crystallised and fell back into the ocean. This became the first island called Onogono where they made their home.

They went onto to create the eight major islands of Japan which were collectively called the Oyashima Kami. They were also the parents of many other of the important kami in Shinto.
4. One of the tenets of Shinto is that individual morality takes precedence over group morality.

Shinto is considered to be a communal religion in that the role of the individual is subordinate to the good of the community. It has no systematized code of conduct, but individuals work towards keeping communal harmony and not disrupting the natural balance of things that is known as "kannagara" or "way of the kami" through contributing to the welfare of the community as a whole.

This thinking has become part of the traditional culture of Japanese life which has led Shinto to being described as "a reservoir of community traditions".
5. What are Shinto places of worship called?

Shinto places of worship are known as shrines or 'jinja'. It is estimated that there are over 80 000 Shinto shrines in Japan. They range in size from the mighty Ise Grand Shrine which nestles in a sacred forest in the Mie Prefecture to the tiny portable shrines known as 'mikoshi' which can be carried to wherever they are required. There are both public shrines and private ones, known as 'kamidana', which are found in people's homes and can be as simple as a shelf in the home on which offerings to the kami are placed. Shrines do not have to be buildings, but can also be a natural object that is thought to possess great kami. Simply put, they are any place where people can venerate and worship the kami of their choice.

Public shrines or 'jinja' tend to be community based, with the local community members each contributing towards the financial requirements. Depending on the size of the shrine, they are presided over by a chief priest or 'guji' with the assistance of 'kannushi' or ordinary priests. In Shinto, both men and women can be priests.
6. One of the most recognisable Shinto symbols is the Torii. What is a Torii?

Toriis are the traditional gates that are found at the entrance to Shinto shrines. Ranging in style and number depending on the shrine, these gates represent the border between the secular living world and the sacred world of the kami. They usually consist of two uprights and two crossbars. Many are painted in a particular shade of red known as vermillion as this is thought to symbolise both vitality and protection. A path of toriis represents a passageway into the sacred space. One of the most famous examples of this pathway can be found at the Fushima Inari Shrine in Kyoto which has nearly 10 000 vermillion torii.

Torii usually have two guardian animal statues that sit on either side of the gate known as 'komainu' to protect the entrance. They are usually dogs or lions. When passing through a torii, it is customary to bow once facing towards the shrine both on entrance and exit. It is also considered good manners to walk through one side of the gate as opposed to down the centre, as this is the space reserved for the kami's use.
7. Examples of which traditional folk craft will you find in Shinto places of worship?

Origami is a Japanese folk art which involves the intricate folding of paper into various shapes. It is believed that tree kami gave life for the paper to be created, so origami paper is never cut. These beautiful and ornate foldings can be found in many Shinto shrines as they are presented as offerings to the kami. Origami foldings are also used as gifts and talismans. One of the most famous of the origami creatures is the crane or 'orizuru'. It is used to symbolise honour and loyalty and is also sent as a message of hope. In Shinto, it is considered to be an international symbol of peace.

Another form of origami often found in Shinto shrines is the white zigzag shaped paper streamers called 'shide' which are attached to a straw rope known as a 'shimenawa'. These are hung at the entrance to shrines to mark the boundary of something sacred.
8. Matsuri celebrations are an important part of the Shinto religion and include many different festivals.

Matsuri which translates as 'to serve' or 'to entertain' is one of the main principles of Shinto, along with purity, sincerity, harmony with nature and a focus on the present. It can be described as any gesture of honour or gratitude to a particular kami. One of the most popular forms of matsuri is the holdings of festivals. There are estimated to be over 10 000 different festivals held annually in Japan. There is a wide range of different events from from the huge seasonal festivals such as the Japanese New Year or 'Shogatsu Matsuri' to the small private household festivals a family will hold to honour their ancestral kami. Every community will hold an annual festival which centres around their particular kami and which is used to bind the community closer together and bring them good luck.

Festivals are normally a mixture of solemn religious rites followed by joyful celebrations. They often include a parade of floats known as 'taiko-doi' that is accompanied by the "procession of the 'mikoshi'", the portable shrines, which enables the kami being honoured to visit the whole community.
9. Amaterasu is one of the most important deities in Shinto. Of what is she the goddess?

Amaterasu Omikani, the "Great Divinity that Illuminates Heaven", is the goddess of the sun whose power it is to bring light to the world. As such, she is one of the most powerful and important kami in Shinto. She is seen as the embodiment of the rising sun and of Japan itself. Amaterasu is the daughter of the creator deity, Izanagi, and was born from his left eye as he wept for the death of Izanami. Her father made her the ruler of the 'Takamagahara' or "High Celestial Plain". This is the sky where the sun dwells and which is the home of the kami. Her brothers are Susanoo, the deity of the sea and storms and Tsukuyomi, the moon deity. Shinto is one of the few religions in the world where the sun deity is a female figure.

Amaterasu is believed to be responsible for the creation of a number of important things such as the cultivation of rice and wheat, the use of silkworms and the invention of weaving with a loom. It is from Amaterasu that the Japanese Imperial Family derive their status, although Emperor Hirohito renounced his divine status in 1946 after World War II. The first emperor of Japan, Jimmu, is considered to be a direct descendant of Amaterasu and so had the right to rule.
10. Why are the "Kojiki" and "Nihon Shoki" important in the Shinto faith?


Answer: They are historical chronicles

Shinto evolved as a religion from the cultural practices of the ancient inhabitants of Japan. As such, it has no central sacred text that are found in other religions. The "Kojiki" and the "Nihon Shoki" are the two oldest historical chronicles that detail the ancient myths and practices of Shinto. As such, they are invaluable source documents for the ceremonies and customs that have developed through the ages. Both documents are written in Chinese as the Japanese language had no written form at that time. The oldest of the two is the "Kojiki", or "Record of Ancients", which was drawn up by the Japanese scholar, Oto Yasumaro, at the behest of the Imperial Family. It was completed in 712CE and is the first known record of the birth of Shintoism.

The "Nihon Shoki", or "Chronicles of Japan", is also sometimes known as the "Nihon-gi", its official name. It was compiled a few years after the "Kojiki" in 720CE by a group of court scholars. It contains the first textual reference to Shinto. Both these chronicles are considered holy by followers of Shinto.
Source: Author KayceeKool