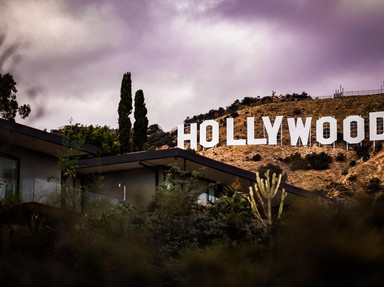 Trivia quizzes on the topic of Celebrity Connections. How much do you know?

Quick Question
What is the name of the actor that was in "Malice"?
1.

A Celebrity Common Bond 15 questions
Average, 15 Qns, billybob87, Jan 22 10
The fourteen people listed all have something in common. See if you can figure it out!
Average
billybob87
7497 plays
3.

Celebrity Royalty...Kind Of! 10 questions
Average, 10 Qns, ClaudiaFerguson, Jul 29 21
We all know who the King of Rock and Roll is, don't we? I give you a "royal" title and you choose who is known by that title. Mostly multiple choice, but a couple of obvious ones are FITB.
Average
ClaudiaFerguson
Jul 29 21
5517 plays
4.

Celebrities with a Connection 15 questions
Average, 15 Qns, TonyTheDad, Jan 09 12
Identify these celebrities, then discover their secret connection after the last question.
Average
TonyTheDad

Who's Who: Celebrity Santas

10 questions
Average, 10 Qns, ponycargirl, Dec 15 19
All of these actors have been cast as Santa Claus, but they have other accomplishments that should be noted too. See if you can recognize who's who!
Average
ponycargirl

Which Celebrity Does Not Belong? 10 questions
Tough, 10 Qns, superferd, May 23 19
Each of these questions will have one celebrity that does not belong with the rest. You will get the gist. Good luck!
Tough
superferd
May 23 19
3048 plays
7.

Celebrities Who Look Alike 10 questions
Average, 10 Qns, chimaeraqueen, Apr 08 17
This is a question-free quiz where you identify the celebrity who looks like another celebrity based on the descriptions given. Good luck and enjoy the quiz.
Average
chimaeraqueen
Apr 08 17
1413 plays
8.

Celebrity Connections 20 questions
Tough, 20 Qns, leasha14, Jun 06 05
This quiz connects all the stars in it. It's kinda like playing six degrees of separation. Each question has something to do with the one before it, except number one since there is no question before it. Hope you enjoy this quiz.
Tough
leasha14
2550 plays
9.

Shaken But Not Deterred 10 questions
Average, 10 Qns, bernie73, Mar 24 18
Answer these questions about various celebrities before determining what they all have in common. The title of this quiz is a clue.
Average
bernie73

From the Movie to the Television Series 10 questions
Average, 10 Qns, debodun, Feb 14 17
Many theatrical movies were made into television series. Match the actor from the movie to the one who played the same character in the TV show. WARNING - contains plot spoilers.
Average
debodun
Feb 14 17
480 plays
11.

All The Right Moves: The Co-Stars of Ryan Gosling

10 questions
Average, 10 Qns, 1nn1, May 16 15
In the opening decade of the 21th century, Ryan Gosling became an A-list movie star. He has had a series of interesting (but perhaps not as well known as Gosling) co-stars, the basis of this quiz. This quiz is not easy. It contains *SPOILERS*.
Average
1nn1

Celebrity Linking 10 questions
Average, 10 Qns, PootyPootwell, Apr 18 18
This quiz tests your knowledge of how these celebrities are related through their projects. I'll give you two projects -- TV or film -- and you pick which celebrity was in both. Good luck!
Average
PootyPootwell

Chain Linked 15 questions
Average, 15 Qns, Gamemaster1967, Jun 25 13
This is quiz on some of my favorite actors. Each actor links to the actor in the next question, but you are not required to know the previous answer, to answer the questions.
Average
Gamemaster1967

A Quartet of Actors 10 questions
Average, 10 Qns, Polaris101, Mar 07 05
Jon Cryer, Patrick Dempsey, Jonathan Silverman and Rob Morrow...these four guys have long been seen on TV and in movies, some since they were teens, but the big question is, can you tell them apart?
Average
Polaris101

The Way of Kings 10 questions
Average, 10 Qns, dcpddc478, Jun 18 11
King is a fairly common name, as well as a title. This is a quiz on some famous folks who were not royalty but nonetheless sport the name King or variations of it.
Average
dcpddc478
645 plays
16.

Celebs With Something In Common 25 questions
Difficult, 25 Qns, superferd, Aug 02 10
These Celebrities Have Something In Common: this is similar to the "Common Bond" quizzes except that the answers are all celebrities that have something in common. Can you figure it out what it is? Good luck.
Difficult
superferd
1023 plays
18.

Connect the Stars 20 questions
Difficult, 20 Qns, kitipurr, Mar 08 10
I'll give you two different projects - could be 2 films, 2 TV series, or a TV series and a film. You have to select which actor or actress listed appeared in both! Good luck - I promise, not all of these are going to be easy!
Difficult
kitipurr
1050 plays
19.

Mistaken Identities 10 questions
Average, 10 Qns, NalaMarie, Dec 24 12
Have you ever thought Matthew Broderick was Jon Cryer & Jon Cryer was Matthew Broderick? I have and hopefully after this quiz we all will be able to know the difference between the two! Enjoy!
Average
NalaMarie
693 plays
20.