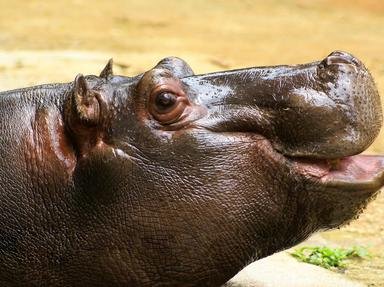 The World's Most Dangerous Animals Quiz

A quiz identifying the ten most dangerous animals in the world. They earned their places according to human fatalities they cause in an average year. It's surprising which animals do and don't make the list. Lock your doors and windows before you begin!

Quiz Answer Key and Fun Facts
1. These omnivores are found in Asia, Europe, and North and South America, but mainly in the northern hemisphere. Adults of all species range from four to nine feet in length and can weigh anywhere from 60 - 1300 pounds. Attacks by these are considered rare, but don't get between a mother and her young. Which big brutes start off the "World's Most Dangerous Animals" list at the #10 position?

When bears are hungry, they will go anywhere for food and eat just about anything from blueberries and fish to rotting garbage and yes, people too. According to a well-researched list by animal scientists, bears are responsible for 5 - 10 fatalities a year.
2. It seems everyone was raised to be scared of this tough-skinned, cartilaginous, animal that is hunted to the tune of 100 million per year. They're not as bad as movies about them suggest, yet they were credited with over 150 attacks last year, and find themselves included on the list of the "World's Most Dangerous Animals". What animal, unfairly labelled as a 'maneater', comes in at #9 on the list?

Did my "Jaws" music scare you? Contrary to popular belief, sharks are not brainless eating machines. They live in all seas and oceans of the world and there are also a few varieties that can also survive in freshwater. Only four of the 360+ species, the great white, oceanic whitetip, tiger, and bull sharks, are known to be truly dangerous to man. in 2008 they were responsible for approximately 100 deaths.
3. Coming in at #8 is an animal that looks anything but dangerous. There are over 200 varieties that measure anywhere one inch to six feet in diameter, and every one of the species has the capability of poisoning their victims through the use of nematocysts. It's a slow-moving creature and looks fragile, and its appearance fools many into thinking that even the small ones are harmless. Which of the "World's Most Dangerous Animals" am I describing above?

Peanut butter and jellyfish anybody? YUK! Stings from their tentacles ranges from no effect to fatal, depending on one's tolerance to venom. Vinegar(3-10%) helps neutralize all jellyfish stings except for the Portuguese Man-of-War variety. If no vinegar is available, then pray someone you know well is nearby as the next best thing is human urine.(Excuse me ma'am? I've been stung on the head by a jellyfish and don't have any vinegar!) Over 100 deaths a year result from jellyfish stings.
4. Mostly found in Africa, this behemoth owns a reputation as being a ruthless killer. It can reach a weight of several thousand pounds with the average adult male measuring 11-17 feet in length. Herbivores by nature, they're extremely ill-tempered towards humans and their natural enemies, crocodiles, and have been witnessed attacking and consuming both. Which massive mammal took #7 on the "World's Most Dangerous Animals" list?

Also known as a "river horse", the hippopotamus has earned its reputation for being a ruthless killer. Known to be the most temperamental creature on earth, it's wise for humans to give them a wide berth because despite being big and bulky, hippos can reach speeds of between 30 and 50kmh over short distances. Over 150 fatalities were attributed to hippos in 2008 which is a lot considering they now live only on the African continent and are suffering ever-dwindling numbers.
5. This next animal often has a friendly nature towards people, yet are known to attack unexpectedly, even people they've been familiar with for decades. Native only to Africa and some parts of southern and eastern Asia, these strictly herbivorous mammals kill an average of nearly 500 people every year. Which extremely intelligent animal, sits at #6 on the "World's Most Dangerous Animals" countdown?

They say that elephants never forget and after many studies it's been found that they do indeed have an excellent memory. Not aggressive in nature, when they do go on a rampage, it's often discovered later on that the animal had been provoked in some way.

It's usually too late though as they often have to be killed because of their size and the destruction this largest living land animal can cause.
6. With a bite that produces over 5,000 pounds per square inch, I thought this grotesque carnivore would sit higher on the most dangerous animals list. Found mostly in Africa and Australia, it has been seen killing sharks, yet it has a perfect symbiotic relationship with the Egyptian plover, a small bird that serves as its personal dental hygienist. Coming in at #5 on the "World's Most Dangerous Animals" list, what creature am I speaking of ?

"Crocodiles"..YUK! On average, nearly 800 people a year die in the jaws of this disgusting looking beast. The Egyptian Plover bird isn't afraid of the big reptile because it serves the purpose of picking the food debris from the croc's teeth, giving the lizard it's own personal dental worker. On February 19th, 1945, 900 Japanese soldiers in Burma tried to escape advancing allied forces by retreating through 10 miles of Mangrove swamps. About 500 escaped, with 20 being captured alive.

It's uncertain as to how many died from bullets, but the remaining 380 were never found, likely becoming a smorgasbord for hungry crocs.
7. Number four on the "World's Most Dangerous Animals" list is actually a group of several species. Experts say if you meet up with one of this group, "Never Run", but rather stand still, open your coat and/or try to look as big as possible, and avoid eye contact. Many people are 'owned' by the domestic variety. What soft and cuddly group of fast-moving maulers gets the #4 position?

With the fastest land animal being the cheetah and pro teams such as the Tigers, Jaguars, and Lions(pride), this group has to be "big cats". With almost 1,000 deaths a year attributed to these beautiful creatures, they're considered the 4th most dangerous animals on earth. Regarding the last sentence of the question, I'm personally "owned" by a domestic feline, but I'd much rather be owned by a housecat than an angry tiger!
8. There are about 2000 species of these lethal segmented creatures from the arachnid family. Usually measuring from 1/2 to 3 inches, they have the capability to tear prey apart, and to deliver either hemotoxins,(causes swelling, redness, and pain), or neurotoxins,(can cause convulsions, cardiac irregularities, paralysis, and death). In Mexico they say to check your shoes for these before putting them on. On the "World's Most Dangerous Animals" list, which creature earns #3 spot?

Scorpions, the creature, not the rock band, were known to cause an average of almost 2,000 deaths a year in the mid 2000's. Mostly an isolated animal, and rarely bothersome to humans, they will quickly sting if provoked in any way. Found mostly south of the 49th parallel in hot, humid, countries, they're a well engineered specimen with a small, but very strong set of front claws, a body with two parts, six sets of appendages (including front claws), and probably the most efficient stinging machine of any arachnid species.
9. With over 450 venomous species, of which 250 are capable of killing a man, this creepy animal earns the #2 rank on the list of "World's Most Dangerous Animals". Human fatalities occur in Africa, North America, Asia, and Australia, home of the deadliest poison carrier of the entire species. The warmth of our bloodstreams is what helps it target us, yet almost 100% of attacks occur because of human encroachment on their habitat and mishandling of the animals. Which group of wicked wildlife, that takes #2, am I referring to?

Upwards of 125,000 deaths were caused by "venomous snakes" in 2004 alone, as per combined reports by wildlife/animals groups, as well as hospital and medical establishments worldwide. This doesn't include fatalities from the non-venomous variety such as boa constrictors and pythons.

The Australian serpent called the Inland Taipan(Fierce Snake), has the dubious distinction of possessing the deadliest venom of any snake, with the poison from one bite having the capacity to kill 100 humans!
10. I was rather surprised to see this creature in the #1 position, yet, it's involved in over 5 million deaths a year, with estimates going as high as 50 million+! What do you think it is? Are you as nervous and excited as I am? For the fun of it, I'm witholding information about it, but I'll offer a tiny clue, albeit vague, to see if you can use your own cognitive creativity to decide what gets credit of being the #1 killing creature on the planet. So, according to the general consensus of animal experts, which of the following gets the nod for the #1 "World's Most Dangerous Animal"? *Note: The obvious answer for #1 would be "humans", yet for the purpose of this quiz, I've not included it.

Thanks to its ability to deliver deadly disease directly to the bloodstream, the ever-pestering "mosquito" is the clear winner (winner?) as the "World's Most Dangerous Animal". Known mostly for passing on malaria, it also is responsible for elephantiasis, yellow fever, West Nile virus, dengue fever, and some other fevers and diseases that don't even have names as yet. I'm no animal activist and I love and respect all life, but when it comes to the pesky skeeter, I say swat 'em, smoosh 'em, spray 'em, squash 'em, and mash 'em every chance you get.
Source: Author krazykritik 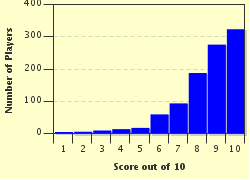 Related Quizzes
1. Animals A to Z Tough
2. That Animal is a What? Average
3. Telling Ducks From Cats, The Easy Way Easier
4. Animal Hodgepodge #3 Easier
5. No Henry, You Cannot Keep This as a Pet. Easier
6. The Wonderful World of Animals Tough
7. Look! Animals! Click Here! Easier
8. Dazzler the Lizard Runs for her Life! Easier
9. Creatures of the Night Average
10. Which Animal Am I? Very Easy
11. O Hai Der! Average
12. Unusual Suspects Very Easy


Other Destinations
Explore Other Quizzes by krazykritik