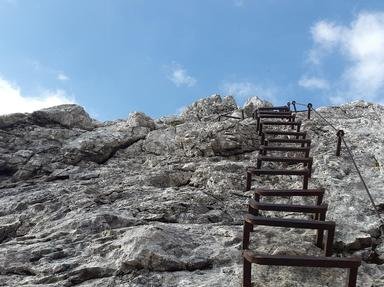 This is it. The end. Or is it? Okay, I'll stop being overly dramatic. Start with a 10-letter word, drop one letter at a time to reach a 3-letter word, then work your way up to a new 10-letter word adding a letter each time.

Quiz Answer Key and Fun Facts
1. What 10-letter mode of transport uses overhead rotating blades to lift the vehicle into the air?

Famously, Leonardo da Vinci sketched out designs for helicopter-like contraptions. There is some debate over who should be given the title of the inventor of the helicopter: Paul Cornu invented the first helicopter, but it wasn't airworthy, while Igor Sikorsky made the first helicopter that flew.
2. What 9-letter adjective means very abundant or excessive?

One might argue that my 'Drop a Letter Ladder' quizzes have become plethoric. Well, they'd be right. Time to end on a high.
3. What 8-letter ion is denoted by the formula ClO2?

Science time! Sodium chlorite is a common ingredient used in making paper (it bleaches it), denoted by the formula NaCl02.
4. What 7-letter word means a hearty laugh?

Different ways to describe giggling can usually be used to describe the person doing the laughing. When I think of someone chortling, they're usually a round, chubby man, like a Winston Churchill or a Father Christmas.
5. What 6-letter word means to dress in apparel?

In much the same way that breath and breathe are often misspelled, cloth and clothe also suffer from this. The addition of the 'e' on the end of the words changes it from a noun to a verb. Sheath and sheathe also take advantage of this rule, as do bath and bathe.
6. What 5-letter word is a place of accommodation for tourists or outsiders, for instance?

Famous hotels or hotel chains include the Hilton, the Savoy, and Fawlty Towers. I know where I'd rather stay.
7. What 4-letter word is an otter's lair?

A holt is also another word for a copse, though you'll rarely hear it outside of poetry, as it has fallen into obscurity. If you were to stop on a copse, would you halt on a holt?
8. What 3-letter word refers to something that has a very high temperature?

I used to live in Australia for a number of years, and it's pretty much hot for ten months a year, with two months of winter when it's lovely and cool and comfortable. However, I may be exaggerating just a bit. Don't let me put you off going, though.
9. Now, start adding letters! What 4-letter word can also mean master of ceremonies?

Host can also mean to furnish or provide. Our illustrious leader, Terry, does a magnificent job hosting all of our wonderful quiz submissions on this site.
10. What 5-letter word refers to something that isn't very long?

I'll tell you something else short: this section of Interesting Information.
11. What 6-letter plural refers to fits or spasms?

I have to admit that I'd always written this as 'throws' before I came upon its true spelling.
12. What 7-letter word means the range in which you are able to hear things?

Science time again? Surely not! You know how when you hear an ambulance siren, for instance, and the sound changes as it comes into earshot and out again? Well, that's called the Doppler Effect. The frequency of the sound wave changes as its source moves, relative to whoever or whatever is receiving the sound.
13. What 8-letter plural means specific body segments of insects? (Watch your spelling! If you're unsure, go ahead to the next questions and solve them before coming back here.)

Believe it or not, thoraces aren't just common in insects and other arthropods. Humans also have a thorax too. Strictly speaking, the thorax is the chest area, anywhere between the neck and the abdomen.
14. What 9-letter word is an equine that draws a carriage?

A carthorse could be pulling a carriage with people inside, or simply drawing a wagon or some such object, laden with goods perhaps.
15. And finally, what 10-letter word refers to the music created by a large group of percussionists, woodwind players, brass players and string players?

This quiz was reviewed by FunTrivia editor Tizzabelle before going online.
Any errors found in FunTrivia content are routinely corrected through our feedback system.
Related Quizzes
This quiz is part of series More letter Ladder Fun!: