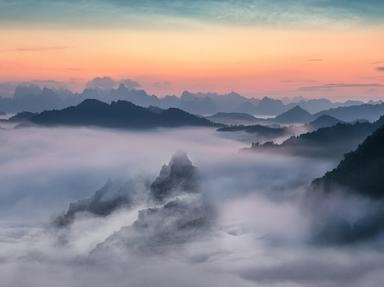 Each clue provides at least two hints to the answer: Ex: Long John Silver learned the hard way not to use a fish as a shoe bottom. Answer: Sole. A sole is a fish, and a sole is a shoe bottom.

Quiz Answer Key and Fun Facts
1. Jacques pondered the lone stick of crispy potato. Would it be enough to feed all the baby fish he had bought in Paris?

A French fry is a crispy potato stick. And baby fish are fry -- so Parisian baby fish would be French fry.
2. Ralph hoisted sail, glad to have his own ship at last. His cargo of cinnamon would be well-guarded by his trusty dog, who would sound an alarm should pirates approach.

A small ship is a bark. Cinnamon is the bark of Cinnamomum verum tree. And a dog will bark to alert you to trouble.
3. Matilda sighed as she toyed with her breakfast of sausages and a light, fluffy batter cake. She would never be able to pin down the Mayor of Brussels on any issue. He would just talk circles around her and never give a direct answer.

A Belgian waffle is a particularly light, fluffy, yeasty batter cake fried on a grid. And the mayor of the the capital of Belgium would, of course, be Belgian; in skirting an issue he would be waffling.
4. Thomas laughed as he danced the night away. Hank had been a wonderful lover, but far too uptight. He'd been such a drag! Now that Thomas had run off, leaving Hank behind, he had nothing to hold him back.

To do something with "gay abandon" is to have no restraints. And Thomas abandoned his gay partner, Hank.
5. Tilly played her piccolo skillfully, trilling away in her top octave. She even managed that passage in Mahler's second symphony, with a note four octaves above Middle C. The Symphonic Society was so pleased with her playing that they paid her a bonus of ten crisp new hundred-dollar bills.

The notes Tilly played were very high indeed, since a piccolo is the highest-pitched of orchestral instruments, and the note she played is the highest written for any instrument in the symphonic repertoire. And she was paid in c notes -- the highest-denomination bills in circulation.
6. Mona pictured the smiling face of Juan Valdez as she poured her cup of java every morning.

Your face is your "mug", and Juan Valdez's face is the official -- if fictitious -- face of Colombian Coffee. Mona decanted her coffee into a mug.
7. Arabella was the most obsessive-compulsive Girl Scout ever. All the kindling for her campfire had to be laid out in perfectly symmetrical pairs of twigs before she would pull out her box of fire lighters.

Arabella had to match her sticks before she would reach for the match sticks.
8. Sir Stephen suited up carefully in his armor. The many overlapping slips of metal gave him flexibility while protecting him from both sword and arrow. Meanwhile, his wife, Lady Ludmilla, pondered when the postman would arrive with her new shipment of dishes.

Plate mail is a flexible kind of armor. And Lady Ludmilla was waiting for her plates to arrive in the mail.
9. Sylvia finished her online shopping for dormant tulips. She was happy to see that it wouldn't cost much to ship them, since they were not at all heavy. Suddenly the room went dark. Another power surge had burnt out every filament in the room. She would have to replace the sources of illumination in all her lamps.

The tulip plant lies dormant in a bulb. Sylvia's bulbs aren't heavy; they're very light. And she needs new light bulbs in all her lamps, since their filaments were burnt out.
10. Silas gloomily pondered his water-damaged loom. Now that the boards were swollen out of shape, he could never get the lengthwise threads to line up properly!

To warp is to become misshapen or bent. And the lengthwise threads in weaving are the warp threads.
Source: Author ubermom

Go to Words in Common Quizzes