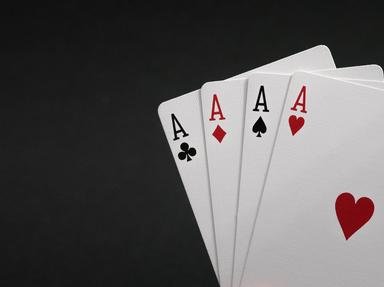 Put Up Your Hands! Trivia Quiz

Outside of the betting strategies and watching for tells, there is a ranking hierarchy for the different kinds of hands you can make in the game of Poker. Can you correctly arrange them from the strongest to the weakest?


A royal flush consists of the cards ace (A), king (K), queen (Q), jack (J), and ten (10) all in the same suit. And as no suit is higher than any other in poker, if more than one player were to manage a royal flush in the same round of play, they would just split the pot.
2. Straight flush


Four of a kind is what it sounds like - four cards of the same number or face card. And within this category, the higher the set, the stronger the hand, with four aces being the strongest hand, only beatable by a straight flush or a royal flush.
4. Full house


As with the straight flush, a flush by itself must have all cards of the same suit, only in this instance, they will NOT be in consecutive sequence.

When two or more players have a flush, then the tie-breaker is by high card rules. It is possible for two players to have the exact same cards in their different suits, which would mean no outright winner, and splitting the pot.
6. Straight

One other difference is that a straight can go up to ace high in the sequence, thus using the same cards as a royal flush, but without all being of the same suit.
7. Three of a kind


Three of a kind is (also) what it sounds like - three cards of the same number or face card. And within this category (just as with four of a kind), the higher the set, the stronger the hand, with three aces being the strongest hand.

Of course, to qualify as just being a three of a kind, the remaining two cards cannot make a pair, or you would jump up the value of your hand to a full house.
8. Two pair


Two pairs of cards that show the same number or face, with the fifth card in the hand not matching either of the others, is what comprises this hand. Since it is possible with four suits of each number/face card to have the same pairs, then high card rules apply when determining tie-breakers.


A hand that has just one pair and no other matching cards also uses the high card rules, beginning with the value of the pair. As with two of a kind, it is possible for two players to have the same high pair (both with two aces, for example), after which the next highest cards are considered until there is a clear winner, or (again) both players have the exact same hand and share the winnings.

And again, there can only be two players that potentially have the same high pair, for the same reasons as in the two pair hand rules (only four suits of the same number).
10. High card


Our last and lowest hand is called high card, and it is what it sounds like. Every card must be a different value, with at least one of the cards not being the same suit as the others.

In determining tie-breakers, the high card rule (named for this hand) applies, and you consider each player's highest card (then the next highest, if there is a tie) until there is a clear winner, or a tie to split the pot.

In this instance, it is possible for as many as four players to all have the same sequence of cards and share the pot, albeit statistically improbable.

Related Quizzes
This quiz is part of series Mixing It Up (1):

New quiz formats were added to FunTrivia with the transition from 2021 to 2022, and here are the first ten that I created, all very much in the experimental stage. Have fun trying my mix of Ordering, Labeling and Classifying quizzes!