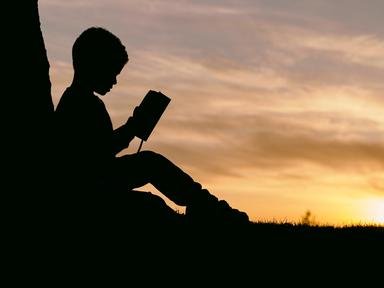 'A Wrinkle in Time' by Madeline L'Engle Quiz

I just recently finished reading this book for the 4th time and just had to make a quiz about it. Hope you like it!

Quiz Answer Key and Fun Facts
1. In chapter 1 Meg wakes up due to a big storm and goes down-stairs. Who is waiting in the kitchen to meet her?

When Meg goes down-stairs and meets Charles Wallace at the table she finds out he had made hot chocolate for both her and her mom who came in a little later.
2. While Meg, Mom and Charles Wallace are drinking some hot cocoa Fortinbras starts barking. Which of the Mrs. Ws comes in with her wet boots and several layers of clothing?

Mrs. Whatsit walks in behind Mom and stays until her feet dry a little from the storm she had been walking in. Meg also makes her a sandwich to eat while her feet dry.
3. Mrs. Whatsit said what that upset Mrs. Murrey?

The tesseract is the project Mr. Murrey had been working on when he disappeared. This is a mode of transportation used by all the Mrs. Ws.
4. What kind of scientist is Mr. Murrey?

We are told this in Chapter 2 when Mr. Jenkins asks Meg what her dad's job WAS and she replies with, "'He IS a physicist.' Meg bared her teeth to reveal the two ferocious lines of braces." She obviously believes her father is still alive after missing for several years.
5. Who did they go to see before heading to Camozotz?

Before dinner Meg showed Calvin a different and easier way to do his math homework. Calvin was quite surprised because Meg was a couple grades below him.
7. What gift did Mrs. Whatsit give Meg?

Mrs. Which gave Meg her glasses and Calvin a quote. Mrs. Who gave her instruction and Mrs. Whatsit gave Meg her faults, which turns out to be Love.
8. How did Meg and Calvin get to Aunt Beast's planet?

Mr. Murrey saved their lives by tessering them to a nearby planet. Because Meg was hurt, the natives help them and saved her life.
9. Did Meg go back to Camozotz by herself?

Right before she left she made up with her dad and then Calvin kissed her. She then left to go save Charles Wallace.
10. What did Meg have that It didn't?

They then went home and met a very happy Mrs. Murrey. Meg was also way more confident in herself than she was at the beginning of the book.
Source: Author Jacquilyn

Related Quizzes
1. Time to Wrinkle! Easier
2. Madeleine L'Engle's "A Ring of Endless Light" Easier
3. A Wrinkle In Time Easier
4. A Wrinkle In Time Average
5. A Wind In The Door Average
6. The Book of "Many Waters" Average
7. L'Engle's Wrinkle Average
8. "A Swiftly Tilting Planet" Average
9. The Characters of "A Wrinkle in Time" Average
10. "Many Waters" Average
11. "Meet the Austins" - Madeline L'Engle Average
12. Madeleine, Oh Madeleine! Meeting the Door in Time Average


Other Destinations
Explore Other Quizzes by Jacquilyn