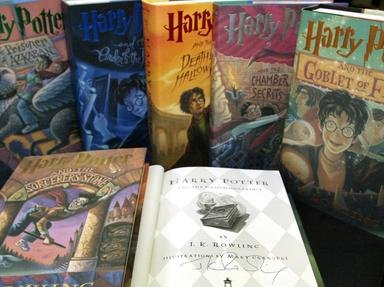 Anyone Can Be Harry Potter Trivia Quiz

One of the most annoying things for a kid is reading a book in which there is all sorts of magic, like in J.K. Rowling's "Harry Potter" - and never being able to experience it themselves. Well, that all changes now - that is, if you know the terminology.

Quiz Answer Key and Fun Facts
1. You're by yourself on the Quidditch field, just flying around, thinking of Ginny. The others are at dinner, but you're not hungry. You decide to practice a little, so you dive down towards the ground at an extremely fast rate and pull up only at the last second. What was the name of the move you just practiced?

The Wronski Feint you just executed is a tactic used by Seekers, like yourself. They pretend to see the Snitch near the ground, and dive toward it. The opposing seeker normally races after them. When they are very close to the ground, they pull up out of the dive, while the opposing Seeker will normally crash. You first saw it when you watched Viktor Krum do it in the 422nd World Cup.
2. You practice some more, and then your stomach gets the better of you so you head on inside the castle, walking to the dining room. But when you enter the castle, a girl with bushy brown hair and brown eyes runs up to you and says to you in a bossy sort of voice, "Harry! Where have you been? I've been looking for you for ages! I've got something to tell you...." As she leads you away, you mumble to yourself, "Yeah, I'm sure you've been looking for me - in the library!" What is this girl's name (first and last name)?

Hermione Granger is one of your best friends, second only to Ron. She's in the top of almost all of her classes, and helps you out with your homework. In your various adventures, she's almost always been there with you, and while she can be a bit bossy, and sometimes even vain, you still really appreciate all that she's done for and with you.
3. You only have a second to give the dining hall a mournful glance before Hermione says, "Come on! Quickly, no time to eat now!" and runs upstairs. Not surprisingly, you see that she's going to the library, as always. You shake your head, and then follow her. You get to the library, panting slightly, and Hermione leads you to a small corner. She casts a spell that fills the ears of all nearby people with a buzzing sound, so that they won't hear your conversation. What spell did she use? (Hint: If you don't know, think etymology)

This spell was created by Severus Snape, under the name of the Half-Blood Prince. "Mobilicorpus" levitates and moves bodies, "Obscuro" takes away eyesight for a temporary amount of time, and "Prior Incantato" reveals the last spell cast by a wand.
4. You ask, exasperated, "What is it, Hermione?" The growling of your stomach finishes your complaint. "Harry," Hermione says, "You weren't at dinner earlier on, but Hedwig brought a message for you." She hands you an unopened envelope, and you see why she was so alarmed. It is sealed with a wax depiction of a skull with a snake coming out of its mouth. What is this called?

It can also be conjured into the sky by the spell, "Morsmordre".
5. With suddenly shaking hands, you break the seal and open the envelope, with Hermione anxiously looking over your shoulder. You read out loud, "To Harry Potter. Seen your friend Ron around? Noticed he wasn't at dinner? I've got him here, and he's screaming pretty loud what with the all the Cruciatus Curses being cast on him lately.... If you don't want me to move on to the only curse even worse than this one, meet me by Hagrid's Hut at midnight, tonight. Yours Truly, Bellatrix Lestrange." What about the Cruciatus Curse made Ron scream so badly?

The Cruciatus Curse is one of the three Unforgivable Curses that you learned about in your fourth year. Other than the Killing Curse, it is perhaps the worst curse ever invented, and if the Ministry of Magic catching you using it without permission, you will be subjected to a life of imprisonment in Azkaban.

It causes terrible pain, that has been compared to "one thousand white-hot knives, boring into the skin."
6. You look up at Hermione, and strengthen your resolve. "I'm going to do it," you hear yourself saying, "I've got to, otherwise Ron could...." Hermione tries to argue, but you cut her off. "It's no use, Hermione. You know that." She takes a deep breath, and says, "Then I'm coming with you. And I've got something that we can both drink, to make sure nothing goes wrong," and she takes out a little bottle filled with what looks like liquid gold. "Liquid Luck... have I ever told you that you're absolutely brilliant?" you ask. What is the proper name for this potion?

Felix Felicis is a very special potion, extremely hard to make, and toxic in large quantities. It makes the drinker lucky for a temporary span of time. It is very useful before duels and fights, as it is known to make spells targeted at the drinker miss. Its usage is banned right before a Quidditch match.
7. You go downstairs, eat dinner and do some Charms homework for a bit, and meet Hermione at the Gryffindor common room at 11:30. You slip your invisibility cloak over the two of you, each drink half of Hermione's potion, and hurry to Hagrid's hut. You don't see anything there, and you know Hagrid is on vacation, so you take off the cloak and look behind the hut, with wands ready. Out of the corner of your eye, you notice a wand poking out of a haystack, pointing at you. Just as you notice this, you hear Bellatrix yell, "Petrificus Totalus!" What spell should you use to protect yourself from her spell?

The shield charm, cast with the word "Protego", creates a magical barrier which not only stops most spells that hit it, but can make the spell rebound and target the attacker! It's a moderately difficult spell - most witches and wizards, even those employed by the Ministry of Magic, are incapable of using it. Expelliarmus disarms the opponent, Sonorus magnifies one's voice, Petrificus Totalus temporarily makes the target immobile, and Expluso causes things to explode.
8. Bellatrix dodges her own spell coming back at her, but Hermione shouts, "Incendio" and the haystack lights on fire. She snarls, and she leaps out of the haystack, dragging an unconscious Ron with her. "Harry," she says to you, "You are perhaps the most gullible boy I have ever had the pleasure to kill. Oh, how the Dark Lord will reward me!" She points her wand at you, and shrieks, "Avada Ke-" Hermione cuts her off with a Silencing Charm, that removes her ability to speak. What spell did she use?

The Silencing Charm is extremely useful when dueling with an opponent not able to use non-verbal spells. Unfortunately, you know that Bellatrix is an extremely skilled witch. However, it will still hamper her, because casting spells non-verbally takes much more concentration. Neither Quietonus or Silentonomus are real spells.
9. Bellatrix starts to engage in a duel with Hermione, and even though she can only use spells non-verbally, you realize that Hermione is only still alive because of the Liquid Luck, and even with it she will soon be overpowered. Now is the time to take Bellatrix out, while she's temporarily distracted. You cast a Stunning Spell on her. What spell do you use?

The Stunning Spells is one of the main offensive spells used in combat that has no long-term effects. Its effect varies depending on the user's intent - it can knock opponents unconscious (that is what you did to Bellatrix), it can be used to freeze the opponents, and sometimes just knocks an opponent down.

However, if a target is hit by multiple Stunning Spells at once, the effect is much greater, and sometimes can even result in death.
10. Your Stunning Spell hits Bellatrix squarely in the back, and she's knocked unconscious immediately. Then you hurry to the unconscious Ron's side, and quickly see that Bellatrix stunned him. You revive him with a spell, and he groggily opens his eyes to see Bellatrix's unconscious body lying beside him. "What did I miss?" he asks, and you and Hermione burst out laughing. What spell did you use to revive Ron?

Rennervate is a Counter-Curse to the Stunning Spell. It was originally named, "Ennervate", but J.K. Rowling - your mystical creator - changed it. Rennervate in English means, 'to energize'. Reducto blasts objects out of the way, Reparo fixes broken things, and Awakeo is not a real spell.
Source: Author portgleep 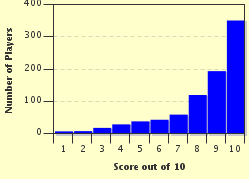 
Other Destinations
Explore Other Quizzes by portgleep