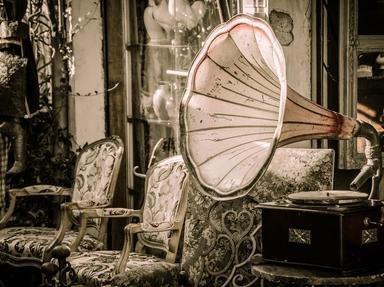 Ending Up On the Fence Trivia Quiz

Humans have built many types of fences for many reasons. Some of the reasons have been decoration, protection, and even creating boundaries. This quiz is about ten types of fences.

Quiz Answer Key and Fun Facts
1. Which of these fences is vertically woven to create a zig-zag pattern?

Chain-link fencing is relatively inexpensive and can be placed so that the view is not obstructed, e.g., a baseball backstop. Slats can be purchased to weave through the links if privacy is preferred.
2. Which of these types of wire fencing is intended to deter people and animals?

This wire was created to prevent cattle in the western US from roaming. Sometimes a rancher would string it up to keep cattle on his land, or the inverse, sometimes it was to prevent someone else's cattle from grazing on his land.
3. Found in northern UK and sometimes referred to as walls, it is believed that these slab fences were built in medieval times to keep cattle. Which of these names could refer to the cattle farm and the fence?

Derived from the Latin for cow, 'vaca', these slab fences can be found around the Pennines in northern UK. Though stones have been taken from many of these walls, several have been listed as historical monuments.
4. Which fence's name harkens back to a time when the metal was worked in a forge?

Most wrought iron fences today are made by casting steel, not by molding from a forge. However, examples still exist of wrought iron from centuries ago, including gates at Westminster Abbey in London from the 13th century.
5. Throughout the US these fences are being constructed along highways to reduce the noise for residents. What are these walls made from?

Studies show that these walls are not as effective at reducing noise as was hoped. Because sound carries in waves, much of the sound simply goes over the wall, affecting residents further away. Many of those not in favor of these barriers (ineffectiveness, animal migrations, etc.) are proposing studies to find other methods of effective sound reduction.
6. These fences began appearing prior to the American Revolution, and were mandatory in some areas for property owners to enclose their property. Which fence listed below does this describe?

Picket fences were traditionally built from local wood, though today they come in many materials. The pickets could be square, rounded, pointed, or more decorative. The spacing of the pickets traditionally meant that the view wasn't totally blocked, but small animals could be kept in.
7. During the American Civil War, which of these fences would provide firewood for both armies?

Where wood was plentiful, this type of fence was easy to build. Logs were cut to length and then split to the required size. The fence shown might also be called a zig-zag fence.
8. Reportedly given their name because of the surprise factor, which of these walls were built on the estates of English gentry in the 17th and 18th centuries?

In many cases, the walls were built to separate the estate from the surrounding land, keeping out animals that might graze on the estate gardens. From the estate the view was unbroken by any visible barrier.
9. Which type of fence is created by planting bushes or trees to create a barrier?

A hedge can not only provide a visual barrier, but also a windbreak. In addition, they also provide homes for birds, insects and other small animals.

The Meikleour Beech Hedge in Scotland is listed in the Guinness World Records for being the tallest and longest hedge.
10. All over the world, these type of fences have been built for centuries. Which of these fence names reflects that the stones are stacked without mortaring?

Often, when preparing the land for agricultural use, the stones were gathered and a wall created. Dry stone walls have also been created to keep livestock penned in a particular grazing area.
Source: Author mlcmlc

Related Quizzes
1. Famous Meals from History Average
2. Visions of the Future, From the Past Average
3. The History of Smoking Average
4. Historical Costumes Average
5. Twist in My Sobriety Average
6. Life in Elizabethan England Average
7. Underwear Over the Years Average
8. The History of the Chamberpot Average
9. Smoke, Smoke that Cigarette Average
10. The Purple People Eaters Average
11. Help! My Dog Won't Eat My Homework! Average
12. Novelties From The Past Tough