Dice are frequently used in role playing games and tabletop sports replay games as well as board games in general. This quiz is all about dice. Enjoy!

Quiz Answer Key and Fun Facts
1. In the game of MONOPOLY, what type of dice are used?

MONOPOLY has been printed in more than 37 languages. It was originally designed in 1803 by Elizabeth Phillips who named it "The Landlord's Game".
2. How many dice are used in a game of YAHTZEE?

YAHTZEE is a commercialized version of the game of "Yacht" with some differences. The earliest known reference to "Yacht" dates back to 1938.
3. Which of these is another name for a pair of different ten sided dice?

Ten-sided dice are numbered zero to nine. Therefore, rolling a pair of them will always result in a number from 1 to 100, hence the term "percentile" dice. There are also dice that are numbered 00-100 and those are considered percentile dice as well.
4. Which of these game shows from the 50s and 60s employed a roll of one six-sided die to navigate through a path filled with cash and prizes?

The life-sized game board on "Video Village" consisted of three "streets": Money Street, Bridge Street and Magic Mile. The American version of the show aired from July 1, 1960 to July 16, 1962.
5. Which of these games is NOT played with dice?


Answer: The Game of LIFE

The Game of LIFE is played with a spinner located in the center of the board. Originally released by the Milton Bradley Company in 1963, the "classic" 1960s version is now marketed by "Winning Moves".
6. How many dice are rolled in a game of "Trivial Pursuit"? All of the answers refer to six sided dice.

In 2008 the Hasbro game company purchased the full rights from Parker Brothers to produce and market "Trivia Pursuit" for 80 million dollars. It was elected to the "GAMES Hall of Fame" by GAMES Magazine in 1993.
7. Which of these is NOT true about a standard game of "Craps"?


Answer: A roll of seven is always an automatic win.

The word "craps" comes from the French word "crapaud" meaning "toad". It was applied to the dice game because the original version played on streets and sidewalks involved people being hunched over to roll the dice.
8. In dice terms what are "snake eyes"?


Answer: A roll of two ones with a pair of dice

The odds of rolling "snake eyes" with a pair of dice are one in thirty-six. In a game of craps, if the shooter rolls snake eyes on the first roll, all "Pass" bets lose.
9. Both the Rolling Stones and Linda Ronstadt had hits with a song containing "Dice" in the title. What was it?

"Tumbling Dice" was co-written by Mick Jagger and Keith Richards. Jagger said in an interview that he was inspired to write the song by a conversation with his housekeeper who liked to gamble-specifically with dice.
10. In dice terms what are "boxcars"?


Answer: A roll of two sixes

The probability of rolling any pair with two six sided dice are one in thirty-six, including "boxcars". "Midnight" is another term sometimes used for a roll of double sixes.
Source: Author Bob9491 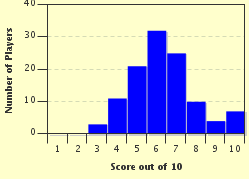 Related Quizzes
This quiz is part of series My Most Recent Quizzes:

These are some of my most recent quizzes. Please play, rate and comment as you wish!


1. My 100th Quiz! All About One Hundred! Average
2. "Bobbing" For Trivia Average
3. What Book Am I In? Easier
4. Lex Luger--A Wrestler's Life Average
5. Uptempo Orbison Average
6. Innocent Bystanders of History Easier
7. Oh No! Not Another "Seinfeld" Quiz! Easier
8. Dice, Dice Baby Average
9. Prepare to Meet Your Mood! Easier