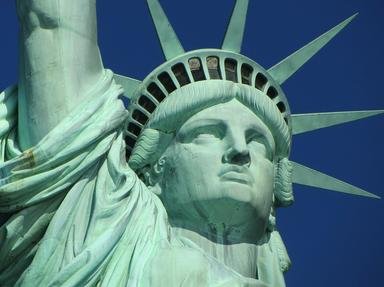 This quiz is about people who were a part of American history without planning it that way.

Quiz Answer Key and Fun Facts
1. Abraham Zapruder, an innocent bystander at a historic event, became famous in 1963. Why?


Answer: He filmed the assassination of President John F. Kennedy.

Abraham Zapruder was born in the Ukraine in 1905 but emigrated to the US with his parents in 1920. He was working in Dallas when the President visited. His film of the assassination of President Kennedy has been the clearest and most graphic video documentation of the tragedy. LIFE Magazine purchased the rights to the film from Zapruder for $50,000.
2. Herbert Morrison was a radio reporter giving an audio description of a historic event which turned tragic. What was it?


Answer: The crash of the Hindenburg airship

Herbert Morrison was assigned by radio station WLS in Chicago to cover the landing of the Hindenberg in New Jersey. Of the 97 people on board 35 perished in the crash. One person on the ground also died from the tragedy. Morrison's report was intensely emotional and has been heard countless times over the years. His expression "Oh the humanity!" has become a part of American culture.
3. Former athletes Rafer Johnson and Rosie Greer, plus author George Plimpton were present at Robert Kennedy's assassination and helped to apprehend the assailant. What was the assassin's name?

Rafer Johnson and Rosie Greer were part of a large group gathered to celebrate Bobby Kennedy's victory in the California Democratic primary election. With incumbent president Lyndon Johnson announcing that he would not seek re-election Kennedy was emerging as a top contender for the nomination.

After the assassination a diary was found in Sirhan's home in which he described his desire to kill Kennedy. An anti-Zionist, Sirhan testified in his trial that his hatred for Kennedy escalated when he learned of Kennedy's support for Israel.
4. In 1961 Boston Red Sox pitcher Tracy Stallard became a part of sports history. What did he do?


Answer: He gave up Roger Maris's 61st homerun, breaking the single season homerun record up to that time.

Babe Ruth's single season homerun record of 60 stood from 1927 to 1960 before it was broken by Roger Maris. Maris hit his 61st and final homerun of the season off pitcher Tracy Stallard on October 1st, 1961. However, the legitimacy of the record was in dispute because several years after Ruth played the baseball season was expanded to 162 games instead of the 154 game season Ruth played in.

It took the entire 162 game season for Maris to accomplish his feat. Therefore in many record books Maris's name was shown with an asterisk. Maris's record stood until 1998 when Mark McGwire hit 70 in a season.
5. This teacher tragically perished in the explosion of the Challenger space shuttle. What was her name?

Christa McAuliffe's interest in the U.S. space program developed at an early age, inspired by the Mercury space program and the Apollo Moon landing. She began her teaching career in 1970 at age 22. The "Teacher In Space Project" was launched by NASA with the encouragement of President Ronald Reagan. Upon hearing of the program Chista immediately applied, one of 11,000 to do so.

She was chosen to be a part of the crew of the "Challenger" space shuttle. She was to give a lesson on space travel while aboard the shuttle but tragically it exploded just 73 seconds after takeoff on January 28, 1986, killing her and the six others who were on the flight.
6. What future country star gave up his seat on the plane that crashed and killed Buddy Holly, The Big Bopper and Ritchie Valens?

Buddy Holly arranged Waylon's first recording session. Prior to that Waylon had worked as a DJ on several radio stations in the Southwest, including KDAV in Lubbock, Texas--Holly's home town. Holly had split with his original band The Crickets and hired Waylon to play bass in his touring backup band. Holly had hired a small plane for himself, Waylon and Tommy Allsup (another band member) to fly them from Clear Lake Iowa to their next tour stop.

But Allsup and Ritchie Valens had a coin toss to determine who got to ride on the plane. Waylon voluntarily gave up his seat to the Big Bopper (J.P. Richardson) because Richardson was ill with the flu. Sadly the plane crashed, killing the pilot and passengers on February 3, 1959.
7. Like most of my fellow Missourians I prayed for the safe return of one of our own -- Rodney "Rocky" Sickmann. What historic event was he a part of?


Answer: He was one of the American hostages held in Iran.

The Iran hostage crisis began on November 4, 1979 when 66 people, including 52 Americans, were captured and taken hostage. The crisis lasted 444 days. The last of the hostages were released on January 20, 1981 which happened to be the day Ronald Reagan was inaugurated as President of the United States. Outgoing President Jimmy Carter received lots of criticism for his handling of the crisis.
8. This veteran TV reporter, and long time host of "Wide World Of Sports", anchored ABC's coverage of the 1972 Summer Olympic games in Munich, Germany. Little did he know he would be reporting a horrible tragedy when Palestinian terrorists killed thirteen Israeli athletes and one security guard. Who was this reporter?

Just before dawn on September 5 eight members of a Palestinian terrorist group known as "Black September" took eleven hostages from the Israeli Olympic team, holding them in their room at first. Two were killed instantly when they tried to resist. The others were transferred by helicopter to the airport in Bavaria. German authorities attempted a rescue there but were outnumbered by the terrorists, resulting in the massacre of the remaining hostages. Jim McKay was overcome with emotion as he reported the tragedy.
9. Harry Hawk was an actor who had just delivered a funny line in a stage play when, during the ensuing laughter, President Abraham Lincoln was assassinated by John Wilkes Booth. Lincoln was attending the play at Ford's Theater in Washington, D.C. What was the name of the play?

"Our American Cousin" is a comedy in three acts, written by Tom Taylor. Harry Hawk played the role of Asa Trenchard on the night of the Lincoln assassination. It was the male lead as Asa was the "American cousin" who had sailed to England to claim an inheritance. The play focuses on the contrast between the crude and loud American and his staid and refined British cousins.
10. The 1996 Summer Olympics were marred by the explosion of a pipe bomb in the host city. A security guard named Richard Jewell discovered the bomb and alerted authorities before it exploded, yet somehow became a "person of interest" in the bombing. In what city did this occur?

The media frenzy that followed the explosion thrust Richard Jewell into the spotlight and because of a somewhat checkered past he became, in the eyes of the media, a prime suspect. He was questioned but never arrested and when the real bomber, a terrorist named Eric Rudolph, was discovered and arrested Jewell was exonerated. Nonetheless, Jewell sued NBC News, The Atlanta-Journal Constitution, The New York Times, CNN and his former college employer Piedmont College for libel. All of the cases were settled out of court.
Source: Author Bob9491

Related Quizzes
This quiz is part of series My Most Recent Quizzes:

These are some of my most recent quizzes. Please play, rate and comment as you wish!


1. My 100th Quiz! All About One Hundred! Average
2. "Bobbing" For Trivia Average
3. What Book Am I In? Easier
4. Lex Luger--A Wrestler's Life Average
5. Uptempo Orbison Average
6. Innocent Bystanders of History Easier
7. Oh No! Not Another "Seinfeld" Quiz! Easier
8. Dice, Dice Baby Average
9. Prepare to Meet Your Mood! Easier