A Lovely Punny Day For a Family Quiz

Ready for some pun? See if you can select the right word for the relevant occupations of my family. Have pun!

Quiz Answer Key and Fun Facts
1. My daughter went target shooting today. When she came home she said she'd had what kind of time there?

Old shooters never die. They just miss the target. I know several who own businesses. They tend to be quick on the trigger when it comes to firing people.
2. One of my nephews is a lawyer. What does he usually do when he goes out with his girlfriend?

Dickens had one of his characters remarking that the law is an ass. That was very judge-mental of him, don't you think?
3. Several of my brothers are high school principals. They often say their day has been - what?

Here's something interesting for you: If school principals don't have enough calcium, their bones can become quite chalky. Do you believe me? No? Well done, you just got an A.
4. My oldest sister is a triple certificate nursing sister. Yesterday she said she had a perfectly *what* day?

When nurses get cross, their temperature shoots sky high. That's because they're feverishly busy sometimes.
5. And Dad of course had a prize bull stud farm. Sometimes however he grew annoyed with the bulls and he often - what - at them?

He used to own a dairy farm as well, but my mother said that all went sour. Then he tried pig farming, but that was a pile of hogwash. He also bred Clydesdale horses on the side, but the work was so tiring that, much to her disapproval, he always had several draughts of beer when he got home.
6. Two of my other nephews are doctors. Nice boys, but sometimes I disapprove of the way they speak to their sisters. What manner is this, do you think?

Old doctors never die. They just cease operating.
7. I had a dear old aunt who ran a cake shop. Her husband unfortunately wasn't very nice to her. In fact I thought he was downright - what?

You could even say that their marriage went quite stale. He eventually married again, to some young girl who always kept her buns on display. My aunt re-married too, to a greengrocer, and had two children with him. So they both got to enjoy the fruits of their labour.
8. My youngest daughter is studying to be a psychologist. She often thinks she's putting on weight, but I reassure her that the material in the clothes she wears always tends to - what?

My daughter can be quite maddening at times. She drives me crazy. Always lying around on the couch - and talk about argue with me. She analyses everything I say. It's enough to drive a person round the bend. Nuts, anyone?
9. My youngest nephew likes to go camping, but his mother doesn't like it. They often argue about it, and I think camping, for them, has become quite a - what sort of issue?

Camping trips can be quite conTENTious at times I do agree. He took his mother with him on a camping trip once. It was his inTENT to show her camping wasn't as dangerous as she thought.
10. I had an old uncle who once ran a butcher's shop. One day a vampire came in looking for blood, but he wasn't having any of that. What did he do instead?


Answer: Put a steak through its heart

He was going to give the vampire the chop right from the moment he first set eyes on it in fact. He planned to set his dog Fang on it.
Source: Author Creedy 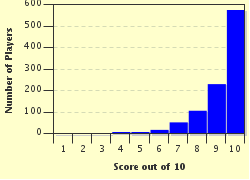 Related Quizzes
This quiz is part of series English Language:

Go to Language Use Quizzes