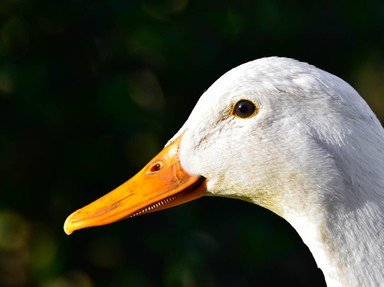 Some are nouns, some are verbs, and some are adjectives, but they are all animal-related words and expressions. See what you know in this third installment of "Animal Talk". All multiple choice.

Quiz Answer Key and Fun Facts
1. A goat is a bearded, horned mammal that is related to members of the sheep family, both domesticated and wild. What is a scapegoat?


Answer: a person receiving the blame for the wrongdoing of another

The origin of this term is in the Bible. Chapter 16 of the book of Leviticus describes how two goats were selected. One was sacrificed as a sin offering and the other one was presented alive to the Lord for making atonement (making amends). It was then released into the desert, symbolizing the removal of sin and guilt from the Israelite community.

"It never failed that Wilson, the youngest of five brothers, was always the scapegoat for any mischief that took place on the farm."
2. A stag is an adult male deer, especially of the medium-size varieties. If you are at a party and see a stag which of the following would it be?


Answer: a man who is not accompanied by a woman

The term stag can also refer to a woman without a date, but this is fairly uncommon. A stag party is a party just for men.

"Miss Scarlet looked across the room and saw that handsome Colonel Mustard standing alone. He was a stag, alone once again at another party."
3. A fox is a meat-eating animal in the dog family that has a bushy tail, but which of these describes a person who is called a fox?


Answer: a sly or crafty person

Foxes are found on almost every continent. They are smaller than wolves and many domestic dogs and do not live in packs. They typically live in small family groups and avoid humans. They are known for their cunning.

"It was foolish of us to believe Michael. We all knew what a fox he could be since he had tricked us every Halloween with his pranks."
4. Sharks are a type of fish with a cartilaginous skeleton that prowl ocean waters. When shark is a noun referring to a person how would he best be described?

Sharks are meat eaters and their general diet includes fish and other sea mammals such as seals. They are generally feared by humans although not all of them are aggressive toward humans. The term "loan shark" refers to someone who loans money at a very high rate of interest.

The term "shark" is not always negative; it can also be used to refer to someone that is exceptionally good at something. (This note was added thanks to the input of Sundancer415.)

"Slim and Clyde were taken in by the shark from the big city and got in big trouble when they couldn't repay their loan quickly enough."
5. A mole is small burrowing mammal that lives underground. What is another definition of the word mole?

Moles are found in North America, Asia and Europe and are considered pests in many places because of the agricultural damage they can cause. Their habit of burrowing underground is similar to the action of a mole of the spying variety - behind the scenes discovering information.

"Jerome, the manager of the Blue Plastics, Inc. factory, couldn't believe that his brother was a mole for their biggest competition, Red Plastics, Inc."
6. We all know that a chicken is a type of domesticated bird. What adjective completes the term " _______ chicken", meaning a young person, especially a girl?

This expression is usually used in the negative.

"I was impressed with Granny Maude's time in the marathon. She's no spring chicken, that one."
7. A sheep is a domesticated animal that has a specific type of hair called wool. What is meant if someone is described as being sheeplike?


Answer: They are meek or timid.

Sheep are known for being easily led and for liking to stick together with other sheep. They are often preyed upon by other animals.

"Emmy's big brown eyes and sheeplike grin belied her sneaky plans to take extra cookies to school in her lunchbox."
8. A ferret is a small, domesticated member of the weasel family. When the word ferret is used as a verb what does it mean?


Answer: to find something by careful investigation

Ferrets have probably been domesticated for about 2500 years. In some parts of the world they are still used to hunt rabbits; they are very inquisitive and have a build that is suitable for this type of activity.

"A successful private investigator will ferret out information from every source and discover the truth."
9. Squirrels are bushy-tailed rodents that live primarily in trees and eat nuts. When squirrel is used as a verb which of the following does it mean?


Answer: to hide something away

There are many different types of squirrels including Grey squirrels, Red squirrels and Fox squirrels. Although squirrels are cute animals many people consider them pests because they eat seeds and nuts from bird feeders and dig up bulbs. They are known for storing away food, thus the definition of the word in this question.

"Not knowing when she would have steady work Linus' mother squirreled away change in glass jars in her basement for hard times."
10. Wolves are large, meat-eating members of the dog family that live in packs. When the word wolf is used as a verb which of the following does it mean?

The grey wolf was once widely distributed in North America, Europe and Asia, but its range decreased with the increase in the human population. Reintroduction efforts have been made with some success, especially in large areas of wilderness. These efforts are controversial due to the presence of livestock that can become prey of the wolves - wolfed down in the field.

"Big Tony always wolfed down his dinner after a hard day of work in the stockyard."
Source: Author SP44000 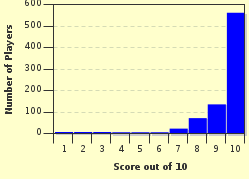 Related Quizzes
1. Fire in the Hole! Easier
2. Catopedia: Cat proverbs and sayings Easier
3. Animal Proverbs Easier
4. We're Off Like a Herd of Turtles Easier
5. Eating Crow Very Easy
6. The Proverbial Cat Difficult
7. The Proverbial Cat Easier
8. A Cat May Look at a King Tough
9. Animal Talk 2 Easier
10. That's One For the Birds Easier
11. A Snail's Pace Very Easy
12. That Bird's Trying To Tell Me Something Average