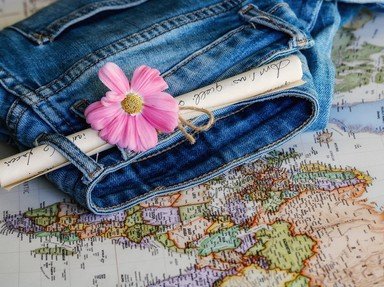 The Sisterhood of the Traveling Pants Series Quiz

They were all born in Bethesda, but didn't attend the same schools. Tibby went to "some weird school where everyone sat on bean bag chairs".
3. Did David and Christina get back together?

In the third book, "Girls in Pants", David and Christina end up having a child together! Carmen is very sad and feels betrayed by her mother.
4. What was the woman's name that helped give birth to Carmen's new brother?

Carmen and her family named the baby Ryan. Tibby helped Christina through the birth of the baby and Christina asked Tibby to become his godmother!
5. Where did Tibby work in the first book, "The Sisterhood of the Traveling Pants"?

Wallman's was where Tibby first met Bailey. I think that Bailey had a big impact in everything that happened to Tibby after they met. This happened in "The Sisterhood of the Traveling Pants".
6. Which university did Lena go to?

Although her parents did not approve, Lena did what she wanted to do and finally her family saw how much she really really wanted to go.
7. What was Eric's last name?

Bridget was crushed when she found out that he had a girlfriend.
8. What was Eric's girlfriend's name?

Bridget was so glad that Eric broke up with her to be with Bridget!
9. What did Brian say was his curfew in the first book, "The Sisterhood of the Traveling Pants"?


Answer: Lena broke up with Kostos

In "The Second Summer of the Sisterhood", Lena and Kostos wrote letters back and forth, but Lena said she has to break it off between them and that is what she did. She found out in the end that Kostos had made a woman pregnant and that he was going to marry her.
Source: Author michrocks164


Other Destinations
Explore Other Quizzes by michrocks164