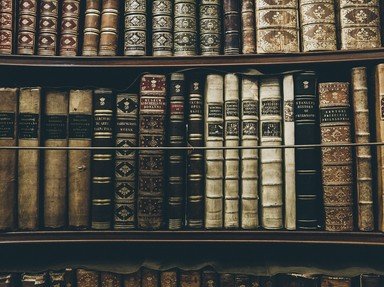 All of these Smiths can be found in books - either as characters, or with their names stamped in gold leaf on the spine.

Quiz Answer Key and Fun Facts
1. This Smith brought us "An Inquiry into the Nature and Causes of the Wealth of Nations". Who is this pioneer in the field of economics?

Smith developed the idea of the "invisible hand" upon which free-market economics are still, to a large extent, based. His "Wealth of Nations" was published in 1776. An interesting tidbit I see upon researching him is that he was apparently abducted by gypsies as a child, but rescued.
2. This Smith may have captured the castle, but is best known for a lot of spotted dogs.

"The Hundred and One Dalmatians, or The Great Dog Robbery" (1956) is by far Dodie Smith's best known work, but there is a small but devoted following also for her first novel, "I Capture the Castle". Smith entered literary life as a playwright - her first produced play, "Autumn Crocus" was written while she was a toy-buyer for a department store.
3. The next Smith is a smith - a worker in metal at a crossroads forge. I first encountered him as a child in the first story in Rudyard Kipling's "Puck of "Pook's Hill", and didn't learn until many years later that he wasn't invented by Mr Kipling. He is indeed a minor god in Norse and Teutonic mythology, and makes an appearance in "Beowulf". What's his name?

Weland (or Wayland) forged the sword Gram that the Germanic hero Sigurd/Siegfried used to kill the dragon Fafnir. Fans of Wagner's operas will find the story familiar.
In the Kipling story, Weland is an old god with no more power, as no one now worships him. He is freed from his servitude at the crossroads when a human sincerely thanks him. He also makes an appearance in Raymond Feist's "Faerie Tale", in which he is a somewhat malevolent character.
4. This Smith with the "White Teeth" has many thoughts to share with us "On Beauty", in her novels. Who is she?

Her first novel "White Teeth" was something of a publishing sensation, and in my opinion deserved much of the hype - it's an excellent exploration of race and ethnicity in modern Britain. Her third novel, "On Beauty" won the Orange Prize for Fiction in 2006.
5. This bestselling author of what could best be described as "ripping good yarns" grew up on his father's ranch in Zambia (at that time Northern Rhodesia). Almost all of his novels, historical and modern, are set in Africa.

Wilbur Smith's novels are something of a guilty pleasure for me. You couldn't exactly describe them as "good" - indeed sometimes the writing is laughably bad. There is no doubt, though, that the man can tell a story. The books are action packed, fast paced, well researched, and a genuine love of Africa shines through every page. Millions of readers worldwide seem happy to trade prose style for a good read, and who can blame them? His first novel "When the Lion Feeds" was published in 1964 and he hasn't slowed down since.
6. "Once upon a time there was a Martian named ________________." Which Smith did Robert Heinlein write about?

"Stranger in a Strange Land" (1961) is the story of a human baby raised by Martians, and his introduction to human society. Badly dated, it is still worth reading if you can get past some of the cultural assumptions. Heinlein had no trouble imagining a future with space flight, or live grass used as a floor covering, but modern feminism apparently came as a complete surprise.

The book has some provocative ideas, though, and is noted for introducing the word "grok" into the language. (And, yes, that word is still used, by some - came across it in a web forum just the other day.) It means, literally, "to drink" - water has immense significance to the book's Martians - but really to understand on a complete emotional, physical and spiritual level.

The incorrect answers are the Smiths of cough drop fame.
7. This Smith brought us "A Tree Grows in Brooklyn".

"Growing up in poverty in early 20th century New York" is almost a genre of books in itself - when I was a teen haunting public libraries in the 1960s I came across dozens of them. This is one of the best of the bunch. The heroine, Francie Nolan, is like the tree of the title - in the concrete, dirt and neglect of her Brooklyn neighbourhood, she grows into something beautiful.

"A Tree Grows in Brooklyn", a thinly disguised autobiography, was a huge best seller when it came out in 1943, and was made into a movie in 1945 by Elia Kazan.
8. The literary character Psmith fits the theme of this quiz, as the "P" is silent ("as in pshrimp"). Who created him?

Unusual among the young men in Wodehouse novels, Psmith is not a bumbling idiot. Imperturbable and facile-tongued, he languidly floats through the novels, while other people get in trouble.

If you enjoy earnest writing that hammers its points home thoroughly, you probably won't think much of Wodehouse. If you like it light, though, you can't help but get a giggle out of him.
9. EE Smith Ph.D. was an early science fiction author, most noted for his "Lensmen" series. What was his nickname?

EE "Doc" Smith was a food chemist by trade, making his living designing such things as doughnut mixes, before he became a writer. He was one of the pioneers of the "space opera" genre - exciting adventures in space suits. The first "Lensmen" novels were serialized in "Astounding Stories", under the editorship of the legendary John W Campbell.
10. This prolific Smith seems to enjoy creating series characters - he has at least four series. His most famous character is probably a "traditionally built" lady detective in Botswana.

"The No. 1 Ladies' Detective Agency" is the first book in the charming series about Precious Ramotswe, the first woman private detective in Botswana. Alexander McCall Smith has also brought us "The 2˝ Pillars of Wisdom", "The Sunday Philosophy Club (Isabel Dalhousie Mysteries)" and "44 Scotland Street" series. And he's not done yet.
Source: Author agony 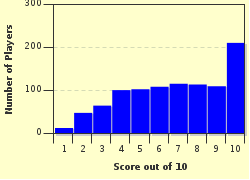 Related Quizzes
This quiz is part of series Literature by Theme:

More Literature: Something in Common Quizzes