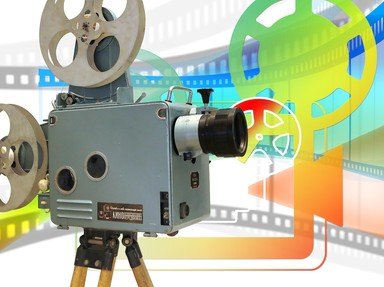 Quiz Answer Key and Fun Facts
1. This 2008 horror movie starred Joshua Jackson and Rachael Taylor. The name of the movie is also a part of a camera. What was this movie?

The movie was directed by Masayuki Ochiai and also starred John Hensley and Megumi Okina. It was a remake of a Thai movie which was released in 2004 under the same name 'Shutter'. In the movie, Ben and Jane (Jackson and Taylor) move to Tokyo where mysterious things begin to happen and they find out that they are being haunted by the ghost of a girl. Jackson has appeared in movies like 'Bobby'. Taylor has appeared in the well known TV series 'Jessica Jones'.

Question by player Saleo
2. What term is used for the film industry in Mumbai, India?

Bollywood is often wrongly used to refer to the whole of India's film industry, while it actually just refers to films made in Mumbai. The name consists of Mumbai's former name Bombay and Hollywood. I've made up the other three expressions.

Question by player wildmatz
3. The 2013 film "Captain Phillips", starring Tom Hanks in the title role, is a true story about an American cargo ship captain taken hostage by pirates around the Horn of Africa. The pirates were from which of the following places?

"Captain Phillips" is based on the 2010 narrative "A Captain's Duty: Somali Pirates, Navy SEALs, and Dangerous Days at Sea", written by Captain Richard Phillips of the harrowing 2009 incident in which Somali pirates are shown leaving Mogadishu by boat and attempting to return to Mogadishu with either their hostage or $10 million in ransom.

The film received numerous accolades and was nominated for six Academy Awards, but did not win any category. The film is noteworthy for recruiting native born Somalis to play the pirates. Most noteworthy is Barkhad Abdi as the pirate captain Abduwali Muse. Abdi, who was born in Mogadishu and later emigrated to Minneapolis, gave a riveting performance in this, his first professional acting job, and was the winner of the BAFTA Award for Best Actor in a Supporting Role.

The real life Muse was eventually sentenced to 33 years in prison for the hijacking of the ship, the Maersk Alabama.

"Scared Stiff" was the ninth of the seventeen movies made by Dean Martin and Jerry Lewis. In it, they visit a haunted castle off the coast of Cuba and see ghosts and zombies. This was Carmen Miranda's last picture before she died in 1955.

"The Fog" was a horror film directed by John Carpenter. It starred Adrienne Barbeau, Jamie Lee Curtis, Janet Leigh and Hal Holbrook. It is the story of fog which engulfs a California coastal town and brings with it the ghosts of sailors who drowned in a shipwreck a century before. The church depicted as the cure of Father Malone (Hal Holbrook) is the Episcopal Church of the Ascension in Sierra Madre.

M. Night Shyamalan was propelled into the big leagues of film making by "The Sixth Sense". He, Bruce Willis, Haley Joel Osment and Toni Collette were nominated for all manner of awards for this production. It is the story of a boy who can see and converse with dead people. Haley Joel Osment's line "I see dead people" became a trope and made it into "The Urban Dictionary".


Question by player FatherSteve
5. Written by and starring Adam Carolla, what boxing movie's title is a play on words to showcase his former life as a carpenter before starting to act in and write movies?

"The Hammer" was a semi-autobiographical tale of a perennial loser who was content in his life to be an amateur boxer and menial laborer, until he heard of a local radio broadcaster needing to be trained for a boxing match.

The story mimics Carolla's own life in that he found future co-star Jimmy Kimmel under very similar circumstances.

Question by player Shadowmyst2004
6. The movie 'Vanilla Sky', starring Tom Cruise, was adapted/remade from the Spanish 1997 movie titled 'Open Your Eyes'. Which actress played in both the American and Spanish versions of the film?

Penelope Cruz began her film career at the age of 17 in her home country of Spain. Her first movie was titled 'Jamon Jamon', which translates to 'Ham Ham'. She also has been nominated for many distinguished awards in both her English and Spanish movies.

Question by player Cross36
7. In which movie did Felix and Oscar get arrested for illegally transporting illegal aliens into California from Mexico?

In "The Odd Couple 2" Felix and Oscar were trying to find the town where Felix's daughter was going to marry Oscar's son. They pulled over, and Felix discovered Oscar lost the road map and had left Felix's luggage at the airport. Felix hit the car with his fists, and it rolled off the road, down a hill, turned over and exploded.

A Mexican driver driving a truck pulled over to give them a ride. On the road the driver met a friend who told him something, and the driver told Felix and Oscar to go on without him while he went in the opposite direction with his friend. Felix continued driving until they were stopped at a police road block. Police escorted illegal aliens out of the back of the truck who had been hiding behind the peaches, and arrested Felix and Oscar for transporting illegal aliens.

Question by player zorlock7
8. Who plays the title character in 1988's "Beetlejuice"?

Question by player HannahConner88
9. The musical "My Fair Lady" (1964), won the Oscar for Best Picture and starred Rex Harrison as Henry Higgins. Which screen legend played the role of Eliza Doolittle"?

"My Fair Lady" won eight Academy Awards in all. In the film, a professor makes a bet with his friend that he can teach a street girl to talk well enough to pass for a duchess. Interesting to note that for the movie, Audrey Hepburn's singing efforts were considered sub-par, and she was dubbed by Marni Nixon.

Question by player johnnycat777
10. The movie "Topkapi", which came out in 1964, is a heist film with a lot of suspense in its plot. Who or what is Topkapi?

Topkapi Palace in Istanbul was the residence of the Ottoman Sultans in the 15th century. It is the largest palace in the world dating from the 1400s. Today, it is a museum visited by millions of tourists. One of its most interesting sections is the harem, the area reserved for the women living in the palace.

The movie is about Melina Mercouri and Maximilian Schell planning to steal an emerald encrusted dagger with the help of Peter Ustinov.