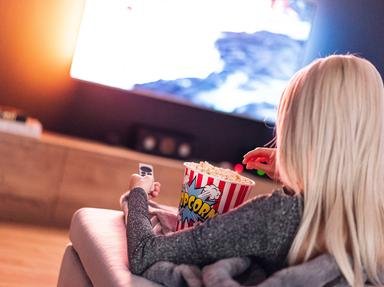 This 1918 silent classic features Roscoe "Fatty" Arbuckle and Buster Keaton as revenuers, and Al St. John as a moonshiner. The quiz is based on the more complete 16mm print, available on the 2001 KINO "Arbuckle & Keaton" DVD set.

Share on Facebook
Share on Twitter
Share by E-Mail
Author
ubermom
Time
7 mins
Type
Multiple Choice
Quiz #
320,597
Updated
Dec 03 21
# Qns
15
Difficulty
Average
Avg Score
10 / 15
Plays
141
This quiz has 2 formats: you can play it as a or as shown below.
Scroll down to the bottom for the answer key.

Quiz Answer Key and Fun Facts
1. We begin with two moonshiners revealing the entrance to their secret lair, "which was all the director's idea," according to the inter-title. Just step on a stone and the brush-covered trap door opens. Jud, the head moonshiner, lives in a shack and shoots at revenuers. Fatty, the head revenuer, arrives, with his lieutenant, Buster. Buster gives Fatty a snappy salute, then opens the car door. What comes out?


Answer: A crowd of armed men, who line up in formation

"Moonshine" is a meta-film -- a two reeler that tells a story while spoofing the conventions of two-reelers. It also plays with things that are only possible in film, like the army of men emerging from the car. I counted 49 of them. The gag was easily done. Keaton had the cameraman, George Peters, tape off half the lens and film half of the car with men getting out, as they filed in from the other side -- which wasn't being filmed. Peters then back-cranked and masked the other half. All he had to do then was film the other side of the car just sitting there to complete the illusion.

According to Keaton biographer Edward McPherson, another director tried to one-up (or rather, multi-up) Buster by having over 100 men pile out of a car with a similar trick, but the result was dismal: the side of the car the men got out of bounced with their weight, while the other half, filmed while nothing was happening, stayed stock-still. Keaton had avoided the problem -- which his keen mechanical mind had foreseen -- by steadying the car with jacks before shooting the gag.
2. Buster joins Fatty atop a rocky dome, which he of course falls from. Fatty tumbles as Buster scrambles to safety, then Buster falls again as he tries to rescue Fatty. The scene ends at the bottom of the hill, with Buster buried in the dirt and Fatty minus his pants. How does Buster get rescued from his premature burial?


Answer: Fatty digs him out with a pickax.

Continuity screw-up: Buster's hat comes and goes as he dangles from the rocky outcropping. When the fall from the escarpment is over, all we can see of Buster are his hands and his slap shoes, wriggling like sea anemones.
3. After his stint underground, Buster is filthy, so Fatty takes him the the creek and gives him a good scrubbing. How does Buster dry off?


Answer: Fatty hangs him by his feet from a tree.

Fatty just leaves Buster hanging and goes about his business. Later on we'll come back to Buster and find him still hanging by his feet, right where Fatty left him.
4. Now we meet Alice, the chief moonshiner's daughter. Al St. John is another moonshiner, in love with Alice. And no, your eyes aren't playing tricks on you. There really is something bizarre about how Al makes his entrance. What's so odd?


Answer: Al seems to materialize out of thin air as he walks toward the camera.

There's never any explanation as to why this happens, but you can clearly see Al materialize as he walks toward us. George Peters had to have cranked the landscape without Al, back-cranked, and then slowly opened the aperture as Al walked toward him from a short distance away. Until Al fully materializes, you can see the shrubs behind him through his transparent legs.

The effect makes Al's character even creepier than usual in a film in which Al achieves probably his creepiest performance.
5. Alice, in her bare feet and burlap dress, settles into a hammock to read "Vogue" magazine. Al primps grotesquely and struts up to greet her. What does he do to her?


Answer: He tickles her feet.

Alice finds Al about as charming as you'd expect any woman to find him. She kicks him in the head, sending him over backward. Al flips her out of the hammock and she smacks him. Alice is a pretty feisty character.
6. Al and Alice brawl, with Alice getting the upper hand pretty quickly, and Al running off to a place of comparative safety. Alice's father comes along and scolds Alice. "Calm down, my child," he tells her. "Wait until you're married to start hitting him." Alice insists that she'll never marry "that big gorilla!" Jud gives his disobedient daughter a beating. Along comes Fatty. Who does he toss in the creek?

Fatty breaks up the fight -- Alice's father beating on her, and Alice fighting back. For a moment it looks as if Fatty is defending the girl, then he scolds her. "Ungrateful daughter! How dare you strike your father!" And he picks her up and gives her a dunking.
7. Like most leading ladies in Arbuckle films, Alice falls head over heels for Fatty. Her father is bewildered. How in the world did his daughter instantly fall in love with Fatty? According to the inter-title, what answer does he get?


Answer: "Look, this is only a two-reeler. We don't have time to build up to love scenes."

"This is crazy! You beat up my daughter and she jumps into your arms!" Jud cries in perplexity. But he accepts Fatty's rationale. "In that case, go ahead. It's your movie. I wash my hands of both of you."
8. Buster spots the secret entrance to the moonshiner's still. He and Fatty go in and taste the wares. They're interrupted when the moonshiners come rushing in. Buster escapes, but Fatty is taken prisoner. What does Buster do as he sees his boss hauled off by moonshiners?


Answer: He stops to roll a cigarette.

Buster never gets to smoke his cigarette -- he gets interrupted by Al's gun in his face. Buster sneezes, blowing tobacco into Al's eyes. Al drops the gun, which Buster picks and hands back to him before noticing Al's distress. Buster thoughtfully helps Al clear the tobacco out of his eyes.
9. Buster winds up face to face with Al, who is progressing rapidly from plain old creepy to downright animalistic. Buster, imitating Al, seems to transform into what kind of animal?

Though not as impressive as his simian transformation in "The Playhouse" (1921), Buster's performance is still striking, especially considering that it was done without the help of makeup or costume. Buster leaps into a tree, and Al chases him up and down among the branches.
10. Buster finally gets rid of Al by trapping him in a pit. Meanwhile, the moonshiners take Fatty to Jud's shack and lock him up in the cellar. What's surprising about Jud's cellar?


Answer: It's an elegant Victorian parlor.

The cellar is tastefully furnished, complete with piano and accent table. Fatty looks around and pinches himself to make sure he's awake. The moonshiners, upstairs in the shack, dress in tuxedos for supper. And Alice, who until this point had been wearing burlap, comes in wearing a fashionable gown to serve Fatty his dinner.
11. Alice comes to the cellar to bring Fatty his dinner. What else does she give him?

She brings him his dinner on a tea cart, then pulls the gun out of her bodice. "You're in danger here!" she says. Fatty wraps the gun in a napkin and eats his dinner.
12. Fatty has to think of a plan of escape. Looking around, he finds inspiration. How does he escape?


Answer: He fakes a suicide and escapes when they haul his supposedly dead body out.

He picks up a copy of "The Count of Monte Cristo" and decides that if playing dead worked for a Dumas character, it can work for him. He covers his face with catsup, fires the gun, and gets hauled off and dumped in the river.

He emerges from the river, to the applause of Buster.
13. Buster and Fatty are reunited after Fatty's escape. "Where are all the extras in this scene?" Fatty asks. "They took a lunch break," Buster replies. "I'll go get them." But Fatty stops him. They'll do the next scene without the extras. But before they can get to work, Al appears. Who do the moonshiners capture?

For some reason Al and the moonshiners ignore Buster and just haul Fatty back to the shack, where they tie him to a chair and light a fuse on a can of gunpowder. Fatty frees his arm, picks up the fuse to light a cigarette, then puts the fuse back on the can.
14. Having captured a revenuer and tied up their prisoner, the moonshiners light the fuse on a can of gunpowder and run for cover. But it's a comedy! Our hero can't be killed! What form does rescue take this time?


Answer: The cabin explodes, the the film runs backward and all is well for the occupant.

The inter-title reads, "Fatty deserves great acclaim for the scene where the cabin explodes and automatically reassembles itself." Fatty walks out unscathed. The moonshiners pull their guns, but Buster, evidently fed up with the whole thing, just pulls out his own revolver and shoots them down like ducks in a shooting gallery.
15. After all the ruckus, the heroes are safe, and the moonshiners are disposed of. There's only one thing left to get closure on: Who gets the girl?

Fatty has just shot Al by bending his rifle barrel so he could shoot around the corner of the building. "You've proven yourself a hero," declares the inter-title. "You may now marry this beautiful girl." But Fatty forgot to mention something. He's already married. By default, the girl goes to Buster. We see the faintest hint of a Keaton smile as he waves goodbye to Fatty -- only go have Alice grab him by the ear and drag him into the shack. Maybe this wasn't such a lucky break for Buster after all.
Source: Author ubermom