I found this to be an amazing movie with an amazing message, as well as a stellar acting job by the cast. Let's see what you know about it. Good luck!

Quiz Answer Key and Fun Facts
1. Which of these events happens to the Nielson family?


Answer: All of These

This movie starts off quite somber, to say the least. Robin Williams plays a character named Chris Nielson who seems to have found his soul mate in Annie, played by Annabella Sciorra. They have two children and a dog. First, the dog falls ill and needs to be put to sleep.

Then, the nanny is driving the kids to school, when a truck hits the car and the kids are killed. Annie is overcome with grief and ends up in a mental home. When it seems that they are finally ready to attempt to move on with their lives, Chris is killed in another car accident, four years later.

This proves to be too much to bear for Annie and she commits suicide.
2. Robin Williams plays a character named Chris, who visits his wife Annie, played by Annabella Sciorra, in a mental institution. He is about to give up hope because his wife cannot get over the loss of their kids and move on with their marriage. However, he decides to stay and fight. What does the couple refer to this day as?

The significance of "Double D-Day" is the point where Chris decides to fight for his marriage and says he will "never give up". This comes into play again later in the movie. Chris was holding a one-way ticket in his hand as well as divorce papers. However, their love was stronger than the pain and heartache of losing their children and it brought Annie back from the mental place she had gone to.
3. Chris knows he is dead as soon as he passes away.

Chris dies in such a sudden accident that he seemed to be in shock and disbelief after passing on. There was a male voice talking to him that was explaining to him that he was dead and it was time to move on, but Chris believed he was dreaming. He could not see the person talking to him either. All he could make out was a ghostly or shadowlike appearance. Chris attends his own funeral, goes back to the house afterwards and clings to the Earth plane because of his firm belief that he has not died. Eventually, however, his presence seems to torture Annie, as if she "feels" him, and he realized that he is causing her grief and "submits".

This is when he enters "heaven".
4. Annie knows she is dead as soon as she passes away.

Annie commits suicide after first losing her children in a car accident and then her husband, in another one, four years later. There is a rule that "suicides" go to hell, automatically. She has no idea that she has died and her "hell" was the manifestation of what her mind was creating. She still thought she lived in their house, which had no running water and had spiders running about, and was both all alone and terrified.
Both "heaven" for Chris and "hell" for Annie were nothing more than their mindsets becoming a reality.
5. Once Chris arrives in heaven, he can now see the person that was talking to him. Which actor plays this character?

Cuba Gooding Jr. plays Albert, who was a mentor from Chris' past. Albert was an older black male when Chris knew him but was young and full of energy in "heaven", where you can make your own reality. Albert says to him, "Thought is real, physical is the illusion. Ironic, huh?"
The first living creature he encounters is his dog. He says in a memorable line, "I screwed up... I'm in dog heaven."
6. After spending time with Albert and getting accustomed to his new environment, he is visited by another person. Who is this person?

A beautiful Asian stewardess comes to greet Chris as Albert has gone to help another new soul adjust to heaven. She works with animals (showing that people still work in the afterlife) and shows Chris around "her heaven", which is brimming with life and happy souls. Chris was alone in "his heaven".

They take a boat ride together and begin to talk and Chris comes to the realization that this is his young daughter. She had chosen this image because this is who she remembered her father speaking about one time and wanted to impress him.

It is a very emotional scene and they reconcile and embrace.
7. What does Chris see in "heaven" that is NOT from his imagination or thoughts? This leads him to the realization that it is a sign from his wife, Annie, who still has a connection with him after death?

Chris does see all of the above items, but the tree seemed misplaced in his new reality. This occurs before Annie commits suicide and she is painting a picture of a purple tree. The tree appears in his reality which seems to stun even Albert, who states that this is a rare phenomenon called "soul mates", where two souls can still communicate after death.
Annie is so grief-ridden however, that she sprays water all over the canvas. As the picture fades away, the purple leaves blow off of the tree, leaving it bare.
8. Albert meets Chris with a solemn expression on his face after returning from his Earthly task. He tells him the news that Annie has committed suicide and he will never see her again, because "suicides" go to hell and that is just the rule. Chris refuses to accept it and finds a tracker to lead him to hell and to find his wife. After reaching hell, who does the tracker reveal himself to be?

In a surprising turn of events, Albert, played by Cuba Gooding Jr. does not turn out to be Albert after all. He turns out to be Chris' son, who portrayed himself as Albert, since Chris had always looked up to and respected him. Chris' son never felt he was worthy of his father's respect, as he had trouble in school and was always pressured by his father to do better.

However, he proves his own self-worth by leading his father to "hell and back" to find his mother. The tracker, played by Max Von Sydow, is an older white man, who Chris did not know during his life on Earth.

However, this turns out to really be Albert, an African-American male during his lifetime, who is still there to help and guide Chris, even after death.
9. What does Chris do to convince Annie that she is dead and in hell and is not part of the nightmare that she has created for herself?


Answer: Joins her and loses his mind

Albert, played by Max Von Sydow leads him all the way to Annie but warns him not to stay with Annie for too long or he will begin to accept her reality as his own and will remain in hell forever. Chris does not heed this advice and sits with Annie, who is trembling and screaming at him to leave for she does not recognize him.

He does begin to lose his mind and a look of fear appears on his face, as he seems to forget who she is and states, "It is so cold." This is when Annie comes to an immediate realization that they are soul mates and he will never leave her and to "never give up". The scene in the institution, where Chris rips up the one-way ticket to stay with Annie is a foreshadowing of this event.

It is truly a "Double D-Day", as their love triumphed over divorce and death, and the pair go into heaven.
10. What is the final thing that Annie and Chris do, to end the movie?

Interestingly enough, even though they have literally gone to "hell and back" to be together and reunite with their children as well, Chris and Annie chose to reincarnate on Earth. Chris states, "I found you in hell, don't you think I can find you in Jersey?" Since they are soul mates, they have no problem meeting up again as young toddlers. God is never introduced in this movie. Chris does ask Cuba Gooding Jr. (believed to be Albert and later found to be his son) where God is in "all of this", referring to heaven. Albert responds by saying, "Oh, He's up there. Somewhere... shouting down that He loves us. Wondering why we can't hear Him. You think?" I took this to mean that God is a benevolent energy force that binds all living things together and does not intervene in the lives of humans, since they have free will. Once humans leave the Earth plane and realize that thoughts are reality and that they could become "creators" themselves, they realized that God and they were one and the same. Of course, this is open for you to interpret it, as you will.
Source: Author superferd 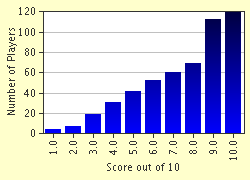 More What Dreams May Come Quizzes