Singing Nuns, Elvis, Chipmunks, you got pretty much anything on Top 40 radio. There was a lot of good stuff out there. See if you remember these. All chart info is U.S. Billboard.

Quiz Answer Key and Fun Facts
1. School kids might sing this one, but it was Perry Como with the hit back in 1960. Well... just what DID Delaware?

This song was loaded with silly take-offs on state names i.e. "He went to pay his Texas (taxes).." but it was peppy enough and Perry brought it to Number 22 in early 1960. A talented and pleasant fellow, Perry had an eight year run with his TV variety show on NBC. Perry and Bobby Vinton were both born in Canonsburg, PA.
2. The Corsairs' only Top 40 hit was a beautiful love song. Unfortunately for the lovers involved, the girl married someone else and only picked up on him later. Ah well... they'd still get together whenever they could. Where should they meet?

Released at the end of '61, "Smoky Places" peaked at Number 12. It was in 1965 that Congress of the U.S. passed the law requiring a warning label on every pack stating "cigarettes may be hazardous to your health". Finding smoky places might be more trouble than it's worth.
3. Back in early '59, the music of Chris Barber and his Jazz Band evoked fleeting thoughts of outdoor cafes, walks along the river... perhaps love. There were enough thoughts to get him a Top Ten hit. What was that song?

If you answered "Midnight in Moscow", you're just answering too fast. With Monty Sunshine on clarinet, this was the only U.S. hit for British Jazz trombonist Chris Barber. It peaked at Number Five. Barber formed his first band at the age of nineteen back in 1949. With ever-evolving formations and varying line-ups through the decades, Chris has performed over 10,000 concerts(as of December 2011).
4. Lots of heartache back in '58... and Robin Luke was suffering big-time over losing his darlin'. Who was this girl?

Robin Luke was the singer and "Susie Darlin'" was the song. That heart-wrenching tune made it up to Number Five and was Luke's only hit. In 1962 it was also Tommy Roe's second Top 40 record. Robin's career as an entertainer tapered off as college demands got too heavy. Eventually those "demands" paid off and he ended up as a Professor at Southwest Missouri State University.
5. In 1962, at the end of his Top Ten hit record, Walter Brennan envisioned climbing up that mountain, walking among them clouds, and standing across the fields. Who would be with him and his friend Old Rivers?

In the beginning of "Old Rivers", we're told that Rivers' mule is named Midnight. It was Brennan's second Top 40 record following his initial hit "Dutchman's Gold". Brennan was the first actor to win three Academy Awards; they were all for Best Supporting Actor.
6. In 1959 Tommy Facenda entered the charts with "High School USA". It eventually peaked at Number 28 and was his only hit. What was noteworthy about this record?


Answer: There were 28 different versions

This "song" wasn't much more than Facenda singing the names of area high schools; to cover different locales Atlantic records released 28 different versions. Tommy has been a member, on-and-off, of The Blue Caps (of Gene Vincent fame) since joining the group in the mid '50s.
7. Through his pal Peter Lawford, Frank Sinatra became friendly with then Senator John Kennedy. To help with JFK's 1960 Presidential bid, Frank re-recorded one of his Top 40 hits with new words written for the occasion. What song was it?

In the movie "Hole in the Head", Sinatra sang "High Hopes" as a duet with Eddie Hodges. Eddie got his show business start in 1957 as a contestant on the music game show "Name That Tune". He was paired with Air Force Major John Glenn and they split the $25,000 Grand Prize. Eddie was discovered when Burgess Meredith's wife spotted him on the show and suggested him for a role in the Broadway play "The Music Man".
8. Ethnic diversity was found on Top 40 radio. Will Glahe and his orchestra gave us a good dose of it with a rollicking Top Twenty hit in late '57. What was that toe tapper?

German accordionist and band leader Glahe peaked at Number 16 with "The Liechtensteiner Polka". It was not his first chart action though; in 1939 he had a four-week run at Number One with "Beer Barrel Polka". He had several U.S. hits in 1939 and 1940. After the war he was known as "The Polka King"... but I'm guessing maybe he wasn't the only one.
9. Everybody remembers the folk/protest classic "If I Had a Hammer". Though it reached the Top Ten in 1962, it charted even higher in 1963. Who had that second (and bigger) hit?

Trini Lopez reached the Number Three spot in 1963; in 1962 Peter, Paul and Mary peaked at Number Ten. Texas-born folk rock artist Lopez was a hot property in '63. In addition to his hit single, his LP "Trini Lopez at PJ'S" just missed the Number One spot on the album charts. Trini later appeared in the film "The Dirty Dozen".
10. Michael Jackson... Diana Ross... Gerry Granahan. Who? Yep, they all had success as lead singers with hit-making groups before having Top 40 success as soloists. We all remember The Jackson 5 and The Supremes, but what was Granahan's group?


Answer: Dicky Doo and The Don'ts

There. Nobody is scoring zero. Well, I guess it's POSSIBLE that some folks forgot this is a Pre-Beatle (British Invasion) quiz and picked Gerry and the Pacemakers. Granahan's early 1958 hit with (as) Dicky Doo was "Click Clack". In late '58 he had a hit with the (then) topical "No, Chemise Please". "Click Clack" has always been one of my favorites.

In their native UK, Gerry and The Pacemakers scored four Number One hits with their first four records.
Source: Author JRooowe 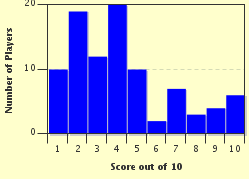 Related Quizzes
This quiz is part of series My Top 40 Radio Quiz collection:

One great thing about "Top 40" radio was the variety. In the same hour you could get Elvis, The Drifters, the Singing Nun, Bobby Vee-Darin-Vinton AND Rydell. These quizzes cover the Top 40 years before the British Invasion.


Other Destinations
Explore Other Quizzes by JRooowe