From the brief description, identify the individual from a Western state either born there or closely associated.

Quiz Answer Key and Fun Facts
1. Alaska: I came to Alaska as a fur trader and became its first governor. What was my name?

Baranov was the first governor under Russian rule.

Vitus Bering was an explorer who established that Alaska was not attached to Siberia. The Bering Sea bears his name. Leonhard Seppala was a hero as he braved -50 degree weather and gusting winds of 80 mph to deliver diphtheria serum. He is also given credit for breeding the sturdy Alaskan Husky shed dog. William Egan was the first governor under statehood.
2. Hawaii: I was born in Belgium but came to the island of Molokai to work with lepers there. I became a leper myself. Hawaii celebrates me and my work each year with a special holiday.

Hiram Fong was the first Chinese-American to serve in the United States Senate. Barack Obama was born in Hawaii and became the 44th President of the United States. Duke Kahanamoku was an Olympic swimmer and personality of Hawaii.
3. Washington: I starred on television as a super-hero from 1966 to 1968. The role so stereotyped me that my acting career was damaged, although I have had numerous bit parts and have done satire of myself. I found a second career in voice-overs. Who am I?

Adam West is still haunted by the Batman series.

Kyle McLachlan break-through role was in "Blue Velvet" followed by "Twin Peaks". He also had continuing roles on "Sex in the City" and "Desperate Housewives". James Caviesel played Jesus in Mel Gibson production of "Passion of the Christ" (2006). Darrin McGavin had many movie and TV roles but is most remembered as the father in "A Christmas Story" (1983).
4. Oregon: Tom Wolfe immortalized me in his non-fiction book "The Electric Kool-Aid Acid Test"(1968). I also wrote two very successful novels "One Flew over the Cuckoo's Nest" (1962) and "Sometimes a Great Notion" (1964). Who am I?

Groening is the creator of the "Simpson" TV series.

Raymond Carver is a short story writer and poet. He is noted for brevity and minimalism in his short stories.

Steve Prefontaine was a distance runner whose career was cut short by a fatal auto accident.
5. California: I was a muckraker, a journalist that exposes the darker side of business and government. Without investigative reporting, we would only know that they want us to think. What is my name?

William Saroyan was a novelist and playwright. The novel "The Human Comedy" (1943) and his play "Time of Your Life" (1939) are his most familiar works.

John Steinbeck was honored with a Pulitzer Prize for his novel "The Grapes of Wrath" (1939) and was recognized for his lifetime of writing excellence with a Nobel Prize in 1962.
6. Idaho: I was known as a sculptor of huge edifices. I directed 400 men in the carving of four United States Presidents into the side of a mountain between 1927 and 1941. Who am I?

Ezra Pound is regarded as one of the most influential poets of the twentieth century. Gregory 'Pappy' Boyington was a flying ace of WW11. Harmon Killibrew is the first baseball player from Idaho be be enshrined in the Baseball Hall of Fame in Cooperstown NY.
7. Nevada: As a tennis player I won many championships including Wimbledon in 1947, United States Open 1946 and 1947, and two Davis Cups in 1946 and 1947 as an amateur. I went on to become a tennis promoter and commentator. Who am I?

Kurt Busch is a successful NASCAR driver.
8. Utah: In 1912 I was a policeman in Salt Lake City. I invented a wooden box containing red and green lights that was operated manually for traffic control. It was the forerunner of the standard traffic light. What was my name?

Donny Osmond is a singer and actor and a member of the musical Osmond family.

Butch Cassidy was a notorious outlaw, more vicious than the character played by Paul Newman in "Butch Cassidy and the Sundance Kid".

Gene Fuller was twice middleweight boxing champion, defeating 'Sugar' Ray Robinson and Carmen Basilio.
9. Arizona: I grew up in Arizona where my family had a department store. I served several terms as US senator and was the Republican candidate for President in 1964. My name was synonymous with the conservative movement. Name me.

John McCain was born to a military family in Panama. He had a distinguished war record, served as Senator from Arizona and was the Republican candidate for President in 2008.

Stewart Udall served under both Presidents Kennedy and Johnson as Secretary of the Interior. He was an activist in this role and identified numerous ecological issues.

Carl Hayden was one of the first to represent Arizona in Washington after statehood. He is often given credit for the rapid growth of Arizona in the last century,
10. Montana: As an actor I was known for my restrained taciturn style. I won Academy Awards for "Sergeant York" (1941) and "High Noon" (1953). Who am I?

Chet Huntley in many ways set the standard for television news reporting, along with his co-host David Brinkley. Evel Knievel is a daredevil motorcyclist whose failures are as famous as his successes. David Lynch is a movie director most noted for his films "Blue Velvet"(1986) and "Eraserhead"(1977) and the "Twin Peaks" TV series (1990-1991).
Source: Author Rehaberpro 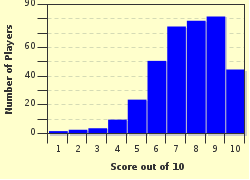 Related Quizzes
This quiz is part of series American Men: