"No Western poet, in the past century and half, not even Browning, or Leopardi or Baudelaire, overshadows Walt Whitman..." ~ Harold Bloom. A quiz for those who love his poetry and the man - have fun and good luck!

He was the second child of nine of Walter Whitman and Louisa Van Velsor. His father was a house builder and both he and his mother came from the families of the early settlers of Long Island. They lived in Brooklyn and Long Island in the 1820s and 1830s.
2. At the age of 17 he started his career as a:

After being an apprentice for a year and learning the printing trade at "Long Island Patriot" he worked first for a Worthington's printing house, then as a compositor on "Long Island Star", then moved to work in New York but the great fire in the printing district effectively ruined the printing industry on 12 August 1836 so he found himself unemployed and then turned to teaching on Long Island - at East Norwich, Hempstead, Babylon, Long Swamp, and Smithtown.

He began his teaching career in a one room school.

In 1841 he quit to turn to journalism as a career.
3. Upon his return to Brooklyn in 1848 he founded a newspaper called:

After his return to Brooklyn in 1845 he worked for the "Evening Star", then later on he edited the "Daily Eagle" for around two years until January 1848 when he quit (or was fired). He then joined his brother Jeff in New Orleans to edit the "Daily Crescent" but he soon resigned and returned to Brooklyn where on September 9th 1848 the first issue of "Weekly Freeman" was published - founded and edited by Whitman.

The offices burned down after this publication but later on it becomes a daily and Whitman edited it till 11th September 1849.
4. On May 15, 1855 Walt Whitman took out the copyright on the first edition of "Leaves of Grass" which contained:

The first volume of the "Leaves of Grass" was published by Whitman himself. He sent a copy of it to Ralph Waldo Emerson, who seeing the greatness of the work responded in a letter saying: "I greet you at the beginning of a great career". The second edition, published in 1856 contained thirty-two poems, Emerson's letter, and an open letter by Whitman in reply to Emerson. All together, the first edition was followed by five revised and three reissued editions during the author's lifetime.
5. Perhaps one of his greatest poems ever written, found in the "Leaves of Grass" contains these lyrics: "And I know that the hand of God is the elderhand of my own,/ And I know that the spirit of God is the eldest brother of my own,/ And that all men ever born are also my brothers ... and the/ women my sisters and lovers".


Answer: Song of Myself

In the original version (1855) of the poem the first line was just "I celebrate myself" and the poem itself, until 1881, when he finally decided on the definite titles of the poems and their arrangement, was called "Walt Whitman". This long poem is considered by many the heart of this book.
6. During the Civil War he traveled to Washington D.C. and spent eleven years there supporting himself as a clerk. As an "author of obscene poetry" he got fired while working in:


Answer: Indian Bureau of Department of the Interior

In January 1865 he started working as a clerk in Indian Bureau of Department of the Interior, but it ended when the Secretary of the Interior, James Harlan found out that he was the author of "Leaves of Grass" which he found very offensive. He fired Whitman in June. In 1866 "The Good Gray Poet" got published in response to the firing.
7. After the assassination of President Lincoln he wrote a poem containing the following lyrics: "The ship has weather'd every rack, the prize we sought is won,/ The port is near, the bells I hear, the people all exulting,/ While follow eyes the steady keel, the vessel grim and daring". The title of this poem is:

In summer of 1865 he wrote his famous poem "Oh Captain! My Captain!" about the death of President Lincoln as well as the great elegy "When Lilacs Last in the Dooryard Bloom'd". In his life he gave several lectures on Lincoln, the first in 1879 in New York and the last in Philadelphia in April 1890.
8. In 1881 "Leaves of Grass" was published by James R. Osgood containing the final arrangement of 293 poems but in 1882 the edition was withdrawn due to:

The District Attorney in Boston threatened criminal prosecution for the use of explicit language in some poems unless the volume was expurgated, so the edition was withdrawn. Rees Welsh (later David McKay) reprinted the Osgood edition in Philadelphia, and due to the banning of the book in Boston, unprecedented rise in sales of the "Leaves of Grass" was registered.
9. Walt Whitman died on:

He died at Mickle Street on March 26 and was buried on March 30, 1892 in Harleigh Cemetery, Camden, New Jersey. Whitman himself made a contract to build the $4000 tomb in Harleigh Cemetery in October 1890. Today he is considered to be one of the greatest American poets or as he described himself: "An American bard at last! ...

He must imbue [his poetry] with himself as he is, disorderly, fleshly, and sensual, a lover of men and women above the whole of the other objects of the universe".
10. Four of Walt Whitman's early notebooks containing fragments and revisions of the poem "Song of Myself", were out of print from 1942 and only appeared again on February 24, 1995 because:


Answer: they disappeared from the Library of Congress

Whitman notebooks were deposited with the Library in 1918 by Thomas B. Harned, a lawyer, one of Whitman's three literary executors. Because of WWII Alvin W. Kremer, and staff crated up the contents of Library of Congress for evacuation, including the 24 notebooks and a butterfly from the Whitman collection.

After it was opened in 1944 ten of them and the butterfly were missing. When a New York lawyer settling his father's estate took the four notebooks and the butterfly to Sotheby's for appraisal they finally came to light after 50 years. Six are still missing.
Source: Author pegazus999 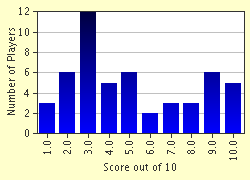 
Other Destinations
Explore Other Quizzes by pegazus999