Angels in the Bible Trivia Quiz

How much do we REALLY know about angels? Find out in this quiz about times people had encounters with angels in the Bible.

Quiz Answer Key and Fun Facts
1. The prophet Isaiah describes one particular type of angel in Isaiah 6. They have six wings and Isaiah refers to them after he has an experience with one of them. What kind of angels are these?

The sixth chapter of Isaiah in the King James Version of the Bible says this, in verses 1-2 and 6-7:

Then flew one of the seraphims unto me, having a live coal in his hand, which he had taken with the tongs from off the altar:
And he laid it upon my mouth, and said, Lo, this hath touched thy lips; and thine iniquity is taken away, and thy sin purged."

Seraph or saraph is the singular form of the plural word, seraphim. The name means fiery, burning, or glowing. The two sets of wings that cover their feet may be seen as a sign of respect in the presence of the Almighty God; the two wings that cover their eyes may be thought to represent humility; while the two wings that are used in flying may have been used for sustaining them in their positions about the throne of Yahweh.

Question submitted by logcrawler.
2. When Gideon was called to be a judge, he was visited by an angel while he was working in a field. It is unclear whether God was the angel or if God was speaking through it. But either way, it was God speaking directly to him. Gideon didn't believe this and decided to test whether it was God speaking. How did he confirm that it was God speaking to him?


Answer: He offered the angel of the LORD an offering and the angel burnt it up

In Judges 6 Gideon was visited by the angel of the LORD (it's unclear whether the angel was God or if God was speaking through the angel) who told him that the LORD was with the Israelites. Gideon argued with this, saying that if God was with them, then he wouldn't be letting them suffer at the hands of the Midianites. The angel then told Gideon to go save his people. Gideon said that he was the least in his family, which was the weakest clan in Manasseh, so he couldn't possibly save Israel. But the angel said that he would be with him to help him save his people. Gideon then told the angel to give him a sign that it really was God talking. He told the angel of the LORD to wait while he got an offering and brought it to him. The angel agreed to wait. Gideon went and got the offering and set it before the angel. The angel of the LORD then burnt it all up completely and then Gideon believed.

Question by Jimmy (J-Zilch).
3. Though Satan is now recognized as the adversary of God, he once held a preferred position in heaven. What type of angel was Satan?

We find in Ezekiel that Satan actually covered or guarded the throne of God. Though the Bible says he was a perfect creation, he also had free will to choose to obey or disobey.

Ezekiel 28:14-15 says, "Thou art the anointed cherub that covereth; and I have set thee so: thou wast upon the holy mountain of God; thou hast walked up and down in the midst of the stones of fire. Thou wast perfect in thy ways from the day thou wast created, till iniquity was found in thee."

Submitted by Dean521.
4. Which of these books in the Bible records the most angelic activity?

Almost every chapter in the book of Revelation records angelic activity. We see them very active in the affairs of heaven and earth. There are angels who seem to be perpetually worshiping God and myriads of angels joining with the saints who are in heaven in worship. We also see them carrying messages and warnings to people on earth. They can also affect the weather and they are usually enormous in size and have great power. They attend to the prayers of the saints and the proclamation of the gospel, and implement God's judgements. The holy angels of God are engaged in warfare with satanic forces. One of the accounts says, "Then I saw an angel coming down from heaven, having the key to the bottomless pit and a great chain in his hand. He laid hold of the dragon, that serpent of old, who is the Devil and Satan, and bound him for a thousand years..." (Revelation 20:1-2, New King James Version).

In the end, Revelation says the devil will be thrown in the burning lake of fire forever, along with all whose names are not found in the Book of Life.

Question submitted by wordwalker.
5. Out of the four Gospels, only one contains the name of Gabriel, the angel who appeared to the mother of Jesus and the father of John the Baptist. What's the name of the Gospel?

Gabriel is referred to by name in only the Gospel of Luke. In fact, this is the only time the angel's name appears in the New Testament. Details about Gabriel appearing to Mary, the mother of Jesus, and Zechariah, the father of John the Baptist, are found in the first chapter of Luke. (In the NIV, the father of John the Baptist is called Zechariah but in the KJV and the NKJV he's called Zacharias.) An unnamed angel also appeared to Joseph to announce the birth of Jesus, as per Matthew 1:18-25.

Submitted by Cowrofl.
6. What three men were saved from the furnace by "an angel of the Lord"?

Some Christians believe the "angel of the Lord" refers to the Son of God. Some say it was just one of God's angels. The story of "Shadrach, Meshach and Abednego" can be found in Daniel 1-3. The king of Babylon built a big statue and told everyone to worship it. When Shadrach, Meshach and Abednego refused multiple times, they were thrown into the fiery furnace. But the angel of the Lord was with them and they came out unscathed. They didn't even smell like smoke.

Question by Ilona_ritter.
7. The Bible says angels are messengers of God, and that they are spirit beings like Michael and Gabriel. Sometimes, though, the messenger may be human and we say "you're like an angel!" when someone is unexpectedly kind to us. There is one Bible person who is referred to as like an angel not once but twice in the New King James Bible. What is his name?

The first time is when Achish (a Philistine king with whom the fugitive David was sheltered from Saul) said to him "I know that you are as good in my sight as an angel of God ..." You can read the story in 1 Samuel 29.

The second time was when David had banished his son Absalom from his presence but his commander-in-chief Joab wanted him reinstated. Joab enlisted the help of an unnamed woman from the village of Tekoa, asking her to go to the king and tell a story that Joab made up for her. When David heard the story and told the woman what he would do, she said "The word of my lord the king will now be comforting; for as the angel of God, so is my lord the king in discerning good and evil. And may the LORD your God be with you". This story is in 2 Samuel 14, and both quotations here are from the New King James' Version.

Incidentally, the unnamed woman is described as a wise woman, and wise she certainly was because in her conversation with King David she also said "God does not take away a life; but He devises means, so that His banished ones are not expelled from Him".

Question submitted by Watchkeeper.
8. According to Biblical accounts, it sometimes possible for angelic beings to appear to be human?

There are a number of occasions in which angels appearing as humans to men are recorded throughout the Bible, in both the Old and New Testaments. A very small sample of those include when Abram was visited by three "men" in the fields of Mamre in Genesis 18, followed by two angels visiting Lot in Sodom in Genesis 19. Elisha's view of angels defending him and a servant is given in 2 Kings 6:15-17. Then there's the angel that appeared at Jesus' tomb after the resurrection in Mark 16:5-8.

Question submitted by Logcrawler.
9. Not all angels have a good reputation. The most famous 'fallen angel' is Satan, who is also known as 'the prosecutor' and 'the accuser'. Which Biblical figure's belief in God did Satan try to sway by taking away everything that he held dear?

In the beginning of the Book of Job, God is asked by Satan whether Job's unwavering faith is only because God bestows blessings upon Job, and asks to test that faith.

God gives in to Satan's requests and starts taking away Job's possessions, but no matter how hard Job is punished, he keeps his righteousness and will not speak against God even when challenged to do so by his own wife. Even at the point of affliction and personal physical suffering, as long as Job draws breath, he keeps his faith.

In the end, God finds that Job is a true believer, and removes the Satan-inflicted suffering from his life. He blesses him with seven new sons and three new daughters, and twice as much wealth as he had before.

LeoDaVinci made a guest appearance in this quiz with this question.
10. Many people see angels as heralds or just messengers of God's news to man, but they are also extremely powerful. During the reign of Hezekiah, Sennecherib besieged Jerusalem with his great army. God heard the prayer of Hezekiah, and during the night smote 185,000 soldiers, ending Assyria's attack. How many angels did God send to defend His people?

2 Kings 19:35 says, "And it came to pass that the angel of the Lord went out, and smote in the camp of the Assyrians an hundred fourscore and five thousand: and when they arose early in the morning, behold, they were all dead corpses." It is an opinion in many Christian circles that the term "the angel of the Lord" is a Christophany, Jesus taking form previous to His virgin birth. Whether or not this is true, we don't know yet! Many Christians believe that in either case, when the King of Kings returns, the battle of Armageddon will be a one-sided affair when Jesus returns as a conquering King. 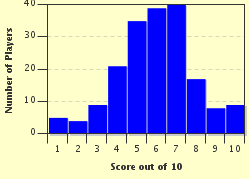 
Other Destinations
Explore Other Quizzes by j-zilch