What if tabloids existed in Bible times? Using the headline, can you identify who the Bible story is about? Hope you enjoy this fun quiz.

I Samuel 17 - For days the Israelites crouched in fear at Goliath's challenges, but when David heard the challenge he said that God would give him the victory. His slaying of the giant made him a national hero and King Saul very jealous.
2. 'I Wrestled an Angel All Night Long and Lived to Tell About it'

Genesis 32:22-32 After this happened, God changed Jacob's name to Israel, which means 'he struggles with God'.
3. 'Donkey Talks to Man!' 'Man Reports, 'My donkey saved my life'

Numbers 22:21-41 - Balaam's donkey saw an angel with a sword, sent by God to try to keep Balaam from completing his mission of placing a curse on the Israelites. The donkey saw the angel and tried to keep Balaam from being killed. He finally succeeded when God allowed the donkey to talk.
4. 'Bethany Man Walks Out of Grave After Being Dead for Four Days: Witnesses say 'Jesus of Nazareth' called the man out of the tomb'

John 11- The raising of Lazarus shows us much about Jesus. We see his humanity as he weeps and see his power when he shows he gives victory over death. It is here that he asserts, 'I am the resurrection and the life.'
5. 'Father and Sons Build Boat in Desert' 'Neighbors Scoff as Man Predicts Water Will Fall from the Sky and Cover the Earth.'

Genesis 6 - Up until the time of the flood it had never rained on earth (see Genesis 1:6-9; 2:5-6). This made Noah's faith even more remarkable.
6. 'Preacher Swallowed by Great Fish, and Lives in the Fish's Stomach for Three Days'

Jonah 1 and 2 - After the great fish vomits Jonah upon dry land, God comes to Jonah a second time and gives him the challenge to go and preach to Nineveh. Jonah obeys and the whole city repents. Also known as Jonas in some versions of the Bible.
7. 'Hebrew Man Freed From Egyptian Prison After Interpreting Pharaoh's Dream! Former Prisoner Predicts Famine Will Strike In Seven Years.'

Genesis 41: Joseph is a great story about the providence of God. He goes from a hated brother sold into slavery, to the head of Potiphar's household. After Potiphar's wife accuses Joseph of attempted rape, he is thrown into prison. He interprets dreams for two other prisoners. One of those prisoners tells Pharaoh about Joseph and the Hebrew goes from prisoner to second in power in Egypt.
8. 'Peter Breaks Up Funeral by Bringing A Joppa Woman Back to Life'

Acts 9:32-43 - Mourners showed Peter all the garments that Dorcas (Tabitha) made while alive. Makes me wonder what will people say about me when I die!
9. 'Man Kills One Thousand Philistines Using a Donkey's Jawbone'

Judges 15:13-17 - Samson was a man of great physical strength, but he was inwardly weak. His lack of self-control led to his capture by the Philistines. He killed many more Philistines at his death by pushing down pillars which led to the collapse of a temple.
10. 'National Leader has Affair with Neighbor then has her Husband Killed'

2 Samuel 11 - After David discovered that Bathsheba was pregnant he attempted several times to get her husband (Uriah) to have sex with his wife but he refused out of loyalty to his fellow soldiers. David therefore, had him killed in battle.
11. 'An Angel Cleansed my Lips with a Hot Coal' 'Prophet Also Claims To Have Seen Several Six-Winged, Two-faced Creatures.'

Isaiah 6:1-13 - Isaiah is known as the Messianic Prophet. His calling in chapter 6 shows the glory of God and the holiness he desires his followers to have.
12. 'Three Hebrew Men Thrown into Hot Furnace but Walk Out Unharmed. A Fourth Man Was Seen in Furnace but his Whereabouts are Unknown.' Which of these was NOT in the fiery furnace?

Daniel 3:1-30 - The faith of these men is seen in the fact that they said that God would deliver them if they were thrown into the fiery furnace. But they go on to say that even if God does not deliver them they were not going to bow down to the idol.
13. 'Runaway Slave Returns Home Claiming to be His Master's Brother' Who is this slave?

Philemon 1-25. Paul sends a letter to Philemon (the master) saying that Onesimus is now 'his brother in Christ' and appeals for the slave's freedom.
14. 'Tragedy in Uz! Wealthy Businessman Loses Livestock, Servants, and Children, All in One Day'

Job 1:1-22 - Job is a great book dealing with the problem of human suffering. Though Job experienced many tragedies, he came through the trials with a stronger faith in God.
15. 'Ninety Year Old Woman Gives Birth to Son! One Hundred Year Old Father Says, 'God Told Me I Would Have this Child'

Genesis 21:1-7 - Abraham is known as the 'Father of faith' because he trusted God to give him this child. He was seventy-five when God made this promise. Twenty-five years later he has the promised child, Romans 4 says that Abraham never doubted God.
Source: Author bigwoo 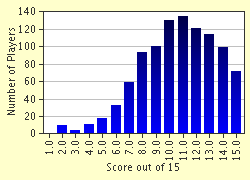