Hope you enjoy this quiz about one of America's most famous tombs.

Quiz Answer Key and Fun Facts
1. Who is buried in Grant's Tomb?

Of course the trick answer to this old joke is no one is buried there but U.S. Grant and his wife Julia are "entombed" there. U.S. Grant was the most famous Union General during the American Civil War and the 18th President of the US serving from 1869 to 1877. Cary Grant was a famous actor, Francis Grant was a famous 19th Century painter and W. T. Grant was a retail department store owner who at one time led one of America's largest department store chains.
2. Where is Grant's Tomb located?

Grant's Tomb is located on the grounds of Riverside Park in the Morningside Heights section of Manhattan in New York City. It was completed in 1897, twelve years after Grant's death. The mausoleum was designed by architect John Duncan. It is one of the largest mausoleums in the world.
3. Over what body of water does Grant's Tomb set?

The Tomb stands almost 300 feet above the Hudson River. John Duncan's original design included a much larger mausoleum being constructed with elaborate spiral staircases winding down to a dock on the Hudson River to make for easy public access. Costs forced the plan to be scaled back.
4. Who paid for the construction of Grant's tomb?


Answer: Private donations were solicited from the general public

Bad business decisions left Grant virtually penniless at the time of his death. Therefore in order to give the still popular and beloved man a proper resting place a fund raising drive was started. Over a period of time over 90,000 people donated $600,000 to build Grant's Tomb. The project finished twelve years after his Grant's death cost about $650,000.
5. What words are carved over the entrance to Grant's Tomb?


Answer: "Let Us Have Peace"

Ironically, the phrase "Let us Have Peace" has become the General's most remembered quote. Grant had originally included that phrase in a letter he sent to the 1868 Republican National Convention accepting the party's presidential nomination. It was later adopted as his campaign slogan.
6. In 1966 three murals created by artist Allyn Cox were added to Grant's Tomb. Located near the top of the cupola the murals depict scenes portraying three of Grant's greatest achievements. Which of these events is NOT portrayed in these murals?


Answer: Grant sitting at his desk in the Oval Office

One mural shows Grant on horseback during the siege at Vicksburg, Mississippi (November 1962 to July 1863). Cox's second mural shows Grant standing next to General George Thomas at Missionary Ridge (near Chattanooga, Tennessee) and a third mural shows General Lee surrendering to Grant at Appomattox Court House, Virginia on April 9, 1865.
7. The flags of what two US states are displayed in Grant's Tomb?

Grant was born in Point Pleasant, Ohio (near Cincinnati) on April 27, 1822 and he lived in Galena, Illinois for several years working in the family's tanning business. Grant returned to Galena after the Civil War and the town presented him with a house.
8. Inside Grant's tomb are the busts of five people. Who are they?

The busts of five generals, who served under Grant (William Tecumseh Sherman, George Henry Thomas, Edward Otho Cresap Ord, Philip Henry Sheridan and James Birdseye McPherson) were added to the Memorial as part of a Works Progress Administration project in 1938. The WPA was a Depression-Era New Deal Program
9. When discussing his final resting place, Grant had only one demand. What was it?


Answer: That it be a place where his wife could be buried next to him

In addition to New York City, Grant and his family considered St. Louis, Missouri, (where Grant had lived from 1854 to 1860) and Galena, Illinois (where Grant lived before and after the Civil War) as the place for his burial. His first choice would have been the US Military Academy in West Point, New York.

However, his stipulation that his wife Julia be buried next to him would not allow him to be buried there because of academy regulations.
10. Behind Grant's Tomb, at the site of his temporary tomb, a ginkgo tree was planted and a plaque was placed there in his honor. Representatives from what country presented these gifts?

In May 1897 a representative for Chinese viceroy Li Hu Chang, planted the tree in Grant's memory. The Chinese official and Grant became friends during his visit to China while taking his post presidential world tour. The Chinese memorial to Grant still exists today. It is located behind the mausoleum surrounded by a black fence.
11. Grant's Tomb features the murals of artist Dean Fausett. What do the maps featured on these murals depict?


Answer: Battles of the Civil War

The maps feature some of the areas where the Civil War took place. The locations of battles are marked by crossed sabers while battles that Grant participated in are marked by a star. Inexplicably, the murals were painted over in 1970 but they were refurbished as part of a restoration project in 1995.
12. What is the official name of Grant's Tomb?

The Grant Monument Association was formed shortly after his death to help provide a fitting memorial. This group of volunteers worked hard in the establishment and improvements of the project. However the association's membership was aging and getting smaller in numbers so in 1958 the care of the mausoleum was given the US National Park Service (which Grant established as President).

The Park Service officially named Grant's Tomb the General Grant National Memorial.
13. During the 1970's and 1980's Grant's Tomb had fallen into a state of disrepair. What happened to compel the National Park Service to finally address the problem?


Answer: All of these were factors in forcing the Park Service to address the issue

After years of fighting Park Service bureaucracy Frank Scaturro (a Columbia University student) released to the media a report detailing the vandalism, graffiti and disrepair that had marred the tomb. The report triggered a great outcry that included Grant's descendents and the Illinois state legislature threatening to remove the remains of Grant and his wife. Embarrassed the Park Service began a 1.8 million dollar restoration project
14. In 1972 what out of place feature did the US National Park Service add to Grant's Tomb?

The brightly colored benches clash badly with the solemn surroundings and architecture of the mausoleum. The addition of the benches was widely criticized not only because the funds spent on the gaudy seats could have been used to help restore the vandalized site but because they provided no aesthetic appeal nor had any historical connection to the monument
15. Who popularized the riddle "Who's buried in Grant's tomb"?

Marx, the host of the game show, "You bet your Life", popularized this question when he would ask it so that all his guests could win a prize on his show. Although the correct answer is "no one", Grant and his wife are entombed not buried in the tomb; Groucho usually accepted the answer "Grant" and gave the contestant a consolation prize.
Source: Author bigwoo 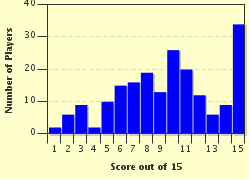